Ah, the architecture of this world. Amoebas may not have backbones, brains, automobiles, plastic, television, Valium or any other of the blessings of a technologically advanced civilization; but their architecture is two billion years ahead of its time.

As I stood behind the coffin of my little son the other day, with my mind bent on anything but disputation, the officiating minister read, as part of his duty, the words, 'If the dead rise not again, let us eat and drink, for to-morrow we die.' I cannot tell you how inexpressibly they shocked me. Paul had neither wife nor child, or he must have known that his alternative involved a blasphemy against all that well best and noblest in human nature. I could have laughed with scorn. What! Because I am face to face with irreparable loss, because I have given back to the source from whence it came, the cause of a great happiness, still retaining through all my life the blessings which have sprung and will spring from that cause, I am to renounce my manhood, and, howling, grovel in bestiality? Why, the very apes know better, and if you shoot their young, the poor brutes grieve their grief out and do not immediately seek distraction in a gorge.

Blessings on Science! When the earth seemâ€™d old,
When Faith grew doting, and the Reason cold,
Twas she discoverâ€™d that the world was young,
And taught a language to its lisping tongue:
â€™Twas she disclosed a future to its view,
And made old knowledge pale before the new. 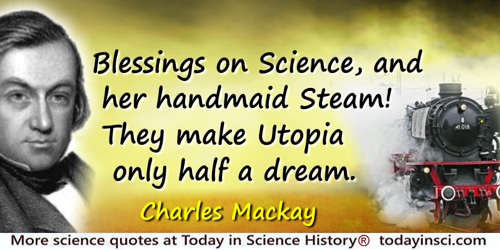 Blessings on Science, and her handmaid Steam!
They make Utopia only half a dream.

Fertile soil, level plains, easy passage across the mountains, coal, iron, and other metals imbedded in the rocks, and a stimulating climate, all shower their blessings upon man.

I don't see why religion and science can't cooperate. What's wrong with using a computer to count our blessings?

If the average man in the street were asked to name the benefits derived from sunshine, he would probably say â€ślight and warmthâ€ť and there he would stop. But, if we analyse the matter a little more deeply, we will soon realize that sunshine is the one great source of all forms of life and activity on this old planet of ours. â€¦ [M]athematics underlies present-day civilization in much the same far-reaching manner as sunshine underlies all forms of life, and that we unconsciously share the benefits conferred by the mathematical achievements of the race just as we unconsciously enjoy the blessings of the sunshine.

Nuclear energy and foreign policy cannot coexist on the planet. The more deep the secret, the greater the determination of every nation to discover and exploit it. Nuclear energy insists on global government, on law, on order, and on the willingness of the community to take the responsibility for the acts of the individual. And to what end? Why, for liberty, first of blessings. Soldier, we await you, and if the

Scourges, pestilence, famine, earthquakes, and wars are to be regarded as blessings, since they serve to prune away the luxuriant growth of the human race.

In The Timeline Book of Science by George Ochoa and Melinda Corey (1995).

Some blessings have been ours in the past, and these may be repeated or even multiplied.

Quoted, without citation, in front matter to T. A. Edison Foundation, Lewis Howard Latimer: A Black Inventor: a Biography and Related Experiments You Can Do (1973). If you know the primary source, please contact Webmaster.

The Dark Ages may returnâ€”the Stone Age may return on the gleaming wings of Science; and what might now shower immeasureable material blessings upon mankind may even bring about its total destruction. Beware! I say. Time may be short.
Referring to the discovery of atomic energy.

The hardest arithmetic to master is that which enables us to count our blessings. 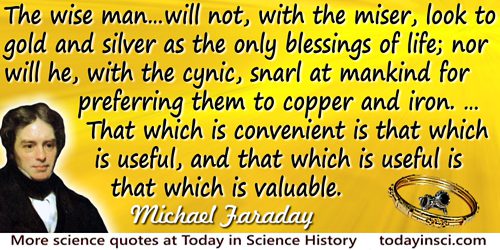 There are â€¦ two fields for human thought and actionâ€”the actual and the possible, the realized and the real. In the actual, the tangible, the realized, the vast proportion of mankind abide. The great, region of the possible, whence all discovery, invention, creation proceed, and which is to the actual as a universe to a planet, is the chosen region of genius. As almost every thing which is now actual was once only possible, as our present facts and axioms were originally inventions or discoveries, it is, under God, to genius that we owe our present blessings. In the past, it created the present; in the present, it is creating the future.