Stephen Jay Gould - Context of Quote on
The Status of Galileo 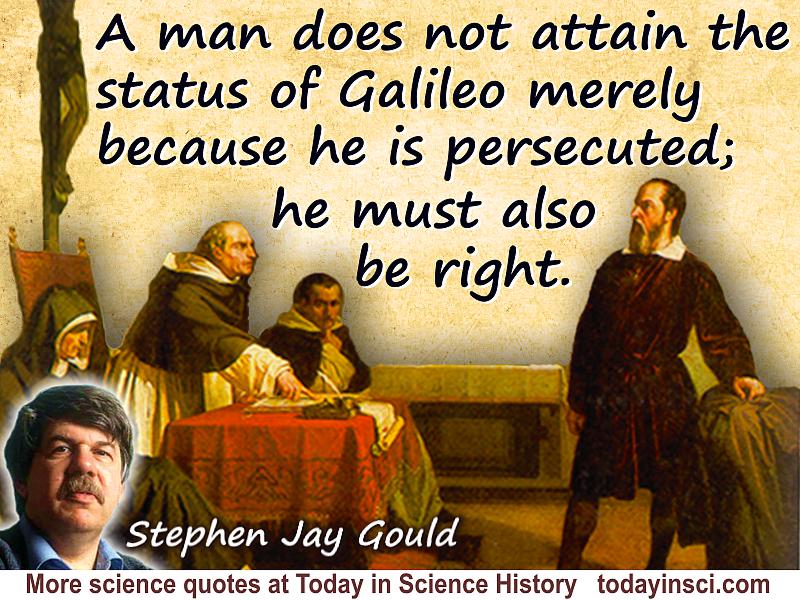 “A man does not attain the status of Galileo merely because he is persecuted; he must also be right.”
— Stephen Jay Gould
In Ever Since Darwin: Reflections in Natural History (1977).

This quote appears in Gould’s article 'Velikovsky in Collision', in which he contrasts Galileo’s rightful place in scientific history with the case of Immanuel Velikovsky, the subject of his essay. Velikovsky researched eyewitness reports by our ancestors and formed his own theory of modern catastrophism, challenging uniformity of geology as well as Darwin's theory of evolution. In Worlds in Collision (1950), Velikovsky presented his research directly to the public, side-stepping the usual route of a scholar presenting his ideas to his scientific colleagues. Some academics attempted to suppress its publication. That action Gould compared to the supression of the work by Galileo. However, in contrast, Gould concludes:

Velikovsky is neither crank nor charlatan—although to state my opinion and to quote one of my colleagues, he is at least gloriously wrong.

You may judge this from Gould’s opening paragraph in which he described one of Velikovsky’s ideas: “Not long ago, Venus emerged from Jupiter, like Athena from the brow of Zeus—literally! It then assumed the form and orbit of a comet. In 1500 B.C., at the time of the Jewish exodus from Egypt, the earth passed twice through Venus's tail, bringing both blessing and chaos; manna from heaven (or rather from hydrocarbons of a cometary tail) and the bloody rivers of the Mosaic plagues (iron from the same tail). Continuing its erratic course, Venus collided with (or nearly brushed) Mars, lost its tail, and hurtled to its present orbit. Mars then left its regular position and almost collided with the earth in about 700 B.C. So great were the terrors of these times, and so ardent our collective desire to forget them, that they have been erased from our conscious minds. Yet they lurk in our inherited and unconscious memory, causing fear, neurosis, aggression, and their social manifestations as war.”


Text by Webmaster, with quotes from Stephen Jay Goulds essay 'Velikovsky in Collision', Natural History (Mar 1975), collected in Ever Since Darwin: Reflections in Natural History (1977, 1992), 154. (source)