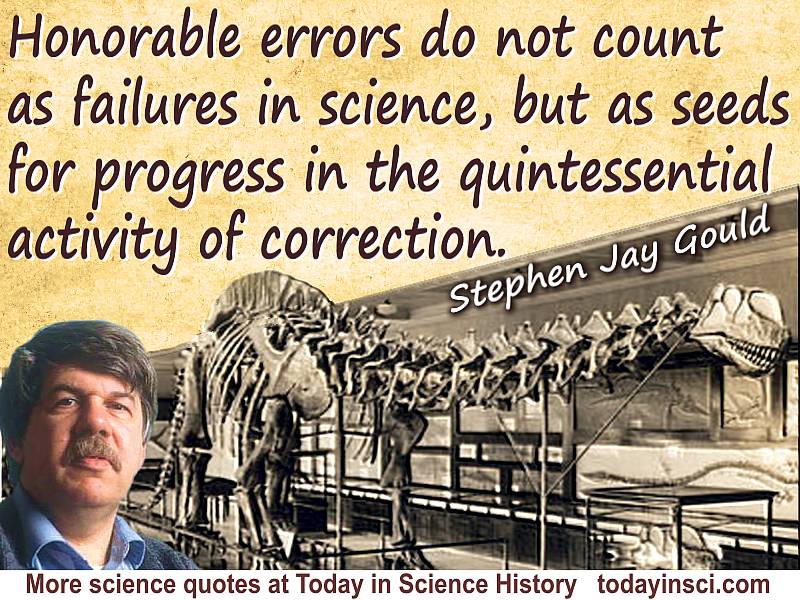 “Honorable errors do not count as failures in science, but as seeds for progress in the quintessential activity of correction.”
— Stephen Jay Gould
In Leonardo's Mountain of Clams and the Diet of Worms (1998).

This quote by Stephen Gould appears in one of the essays, 'Up Against a Wall,' from Natural History magazine collected in his book Leonardo's Mountain of Clams and the Diet of Worms. After making the above statement, Gould continues with a confirmation by Charles Darwin:

“No great and new study has ever developed without substantial error, and we need only cite a famous line from Darwin: ‘False facts are highly injurious to the progress of science, for they often endure long; but false views, if supported by some evidence, do little harm, for every one takes a salutary pleasure in proving their falseness.’”

The quote is illustrated above with a 1934 photograph of the Carnegie Museum's Apatosaurus skeleton. It had originally been excavated in 1909, and displayed headless from 1915 because scientists disagreed over the somewhat small skull found nearby because its characteristics did not match their expectations for the animal with such a massive skeleton. In 1932, perhaps to gratify the viewing public, the incomplete skeleton was nevertheless crowned with an unrelated skull (actually, it was from a Camarasaurus).

That was not corrected until the 1970s when motivated scientists eventually identified the original small skull was the correct one, based on more carefully identified anatomical matches. It had been stored since the original excavation, and it was finally reunited with its skeleton in 1979. In this case, the original error was based on confused preconceptions, and the use of the wrong skull was perhaps less than honorable, but a scientific correction eventually won the day. In fact, other museums with similar mismatched Apatosaurus skeletons followed up with their own corrective action.