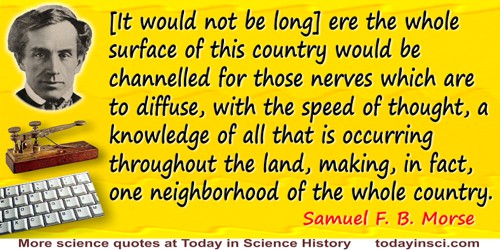 Question: Why do the inhabitants of cold climates eat fat? How would you find experimentally the relative quantities of heat given off when equal weights of sulphur, phosphorus, and carbon are thoroughly burned?
Answer: An inhabitant of cold climates (called Frigid Zoans) eats fat principally because he can't get no lean, also because he wants to rise is temperature. But if equal weights of sulphur phosphorus and carbon are burned in his neighbourhood he will give off eating quite so much. The relative quantities of eat given off will depend upon how much sulphur etc. is burnt and how near it is burned to him. If I knew these facts it would be an easy sum to find the answer.

Genuine student answer* to an Acoustics, Light and Heat paper (1880), Science and Art Department, South Kensington, London, collected by Prof. Oliver Lodge. Quoted in Henry B. Wheatley, Literary Blunders (1893), 183, Question 32. (*From a collection in which Answers are not given verbatim et literatim, and some instances may combine several students' blunders.) 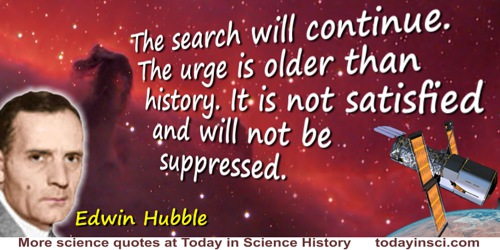 From our home on the Earth, we look out into the distances and strive to imagine the sort of world into which we were born. Today, we have reached far into space. Our immediate neighborhood we know rather intimately. But with increasing distance our knowledge fades  The search will continue. The urge is older than history. It is not satisfied and will not be suppressed.

I grew up in Brooklyn, New York  a city neighborhood that included houses, lampposts, walls, and bushes. But with an early bedtime in the winter, I could look out my window and see the stars, and the stars were not like anything else in my neighborhood. [At age 5] I didnt know what they were.
[At age 9] my mother  said to me, You have a library card now, and you know how to read. Take the streetcar to the library and get a book on stars.  I stepped up to the big librarian and asked for a book on stars.  I sat down and found out the answer, which was something really stunning.I found out that the stars are glowing balls of gas. I also found out that the Sun is a star but really close and that the stars are all suns except really far away I didnt know any physics or mathematics at that time, but I could imagine how far youd have to move the Sun away from us till it was only as bright as a star. It was in that library, reading that book, that the scale of the universe opened up to me. There was something beautiful about it.
At that young age, I already knew that Id be very happy if I could devote my life to finding out more about the stars and the planets that go around them. And its been my great good fortune to do just that.

It might be going too far to say that the modern scientific movement was tainted from its birth; but I think it would be true to say that it was born in an unhealthy neighborhood and at an inauspicious hour. Its triumphs may have been too rapid and purchased at too high a price: reconsideration, and something like repentance, may be required.

The diseases which are hard to cure in neighborhoods are catarrh, hoarseness, coughs, pleurisy, consumption, spitting of blood, and all others that are cured not by lowering the system but by building it up. They are hard to cure, first, because they are originally due to chills; secondly, because the patient's system being already exhausted by disease, the air there, which is in constant agitation owing to winds and therefore deteriorated, takes all the sap of life out of their diseased bodies and leaves them more meager every day. On the other hand, a mild, thick air, without drafts and not constantly blowing back and forth, builds up their frames by its unwavering steadiness, and so strengthens and restores people who are afflicted with these diseases.

The explorations of space end on a note of uncertainty. And necessarily so.  We know our immediate neighborhood rather intimately. With increasing distance our knowledge fades, and fades rapidly. Eventually, we reach the dim boundarythe utmost limits of our telescopes. There, we measure shadows, and we search among ghostly errors of measurement for landmarks that are scarcely more substantial. The search will continue. Not until the empirical resources are exhausted, need we pass on to the dreamy realms of speculation.

The sciences are of a sociable disposition, and flourish best in the neighborhood of each other; nor is there any branch of learning but may be helped and improved by assistance drawn from other arts. 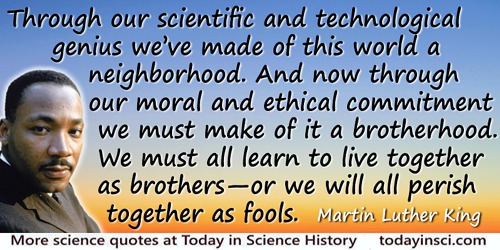 Through our scientific and technological genius weve made of this world a neighborhood. And now through our moral and ethical commitment we must make of it a brotherhood. We must all learn to live together as brothersor we will all perish together as fools.

To learn the ordinary arrangement of the different strata of minerals in the earth, to know from their habitual colocations and proximities, where we find one mineral; whether another, for which we are seeking, may be expected to be in its neighborhood, is useful.

When all the discoveries [relating to the necessities and some to the pastimes of life] were fully developed, the sciences which relate neither to pleasure nor yet to the necessities of life were invented, and first in those places where men had leisure. Thus the mathematical sciences originated in the neighborhood of Egypt, because there the priestly class was allowed leisure.

In Metaphysics, 1-981b, as translated by Hugh Tredennick (1933). Also seen translated as Now that practical skills have developed enough to provide adequately for material needs, one of these sciences which are not devoted to utilitarian ends [mathematics] has been able to arise in Egypt, the priestly caste there having the leisure necessary for disinterested research.

While reading in a textbook of chemistry,  I came across the statement, nitric acid acts upon copper. I was getting tired of reading such absurd stuff and I determined to see what this meant. Copper was more or less familiar to me, for copper cents were then in use. I had seen a bottle marked nitric acid on a table in the doctors office where I was then doing time. I did not know its peculiarities, but I was getting on and likely to learn. The spirit of adventure was upon me. Having nitric acid and copper, I had only to learn what the words act upon meant  I put one of them [cent] on the table, opened the bottle marked nitric acid; poured some of the liquid on the copper; and prepared to make an observation. But what was this wonderful thing which I beheld? The cent was already changed, and it was no small change either. A greenish blue liquid foamed and fumed over the cent and over the table. The air in the neighborhood of the performance became colored dark red. A great colored cloud arose. This was disagreeable and suffocatinghow should I stop this? I tried to get rid of the objectionable mess by picking it up and throwing it out of the window, which I had meanwhile opened. I learned another factnitric acid not only acts upon copper but it acts upon fingers. The pain led to another unpremeditated experiment. I drew my fingers across my trousers and another fact was discovered. Nitric acid acts upon trousers. Taking everything into consideration, that was the most impressive experiment, and, relatively, probably the most costly experiment I have ever performed.

[It would not be long] ere the whole surface of this country would be channelled for those nerves which are to diffuse, with the speed of thought, a knowledge of all that is occurring throughout the land, making, in fact, one neighborhood of the whole country.