At present good work in science pays less well very often than mediocrity in other subjects. This, as was pointed out by Sir Lyon Playfair in his Presidential Address to the British Association in 1885 helps to arrest progress in science teaching.

In Sir Norman Lockyer (ed.), 'Physical Science and the Woolwich Examinations', Nature (23 Feb 1888), 37, 386. Webmaster has assumed this unsigned lead article (editorial?) should be attributed to the Editor.

In 1847 I gave an address at Newton, Mass., before a Teachers Institute conducted by Horace Mann. My subject was grasshoppers. I passed around a large jar of these insects, and made every teacher take one and hold it while I was speaking. If any one dropped the insect, I stopped till he picked it up. This was at that time a great innovation, and excited much laughter and derision. There can be no true progress in the teaching of natural science until such methods become general.

As quoted, without citation, in John Walker, A Fork in the Road: Answers to Daily Dilemmas from the Teachings of Jesus Christ (2005), 185.

Our understanding of the causes of biological diversity is still crude. The science addressing it can be generously put at about the level of physics in the late nineteenth century.

Science is not addressed to poets. 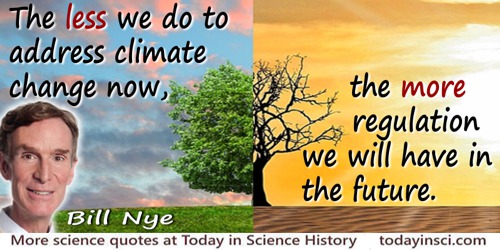 The less we do to address climate change now, the more regulation we will have in the future.

To ask what qualities distinguish good from routine scientific research is to address a question that should be of central concern to every scientist. We can make the question more tractable by rephrasing it, What attributes are shared by the scientific works which have contributed importantly to our understanding of the physical worldin this case the world of living things? Two of the most widely accepted characteristics of good scientific work are generality of application and originality of conception. . These qualities are easy to point out in the works of others and, of course extremely difficult to achieve in ones own research. At first hearing novelty and generality appear to be mutually exclusive, but they really are not. They just have different frames of reference. Novelty has a human frame of reference; generality has a biological frame of reference. Consider, for example, Darwinian Natural Selection. It offers a mechanism so widely applicable as to be almost coexistent with reproduction, so universal as to be almost axiomatic, and so innovative that it shook, and continues to shake, mans perception of causality.

Whatever terrain the environmental historian chooses to investigate, he has to address the age-old predicament of how humankind can feed itself without degrading the primal source of life. Today as ever, that problem is the fundamental challenge in human ecology, and meeting it will require knowing the earth wellknowing its history and knowing its limits.

In 'Transformations of the Earth: toward an Agroecological Perspective in History', Journal of American History (Mar 1990), 76, No. 4, 1106.

[De Morgan relates that some person had made up 800 anagrams on his name, of which he had seen about 650. Commenting on these he says:]
Two of these I have joined in the title-page:
[Ut agendo surgamus arguendo gustamus.]
A few of the others are personal remarks.
Great gun! do us a sum!
is a sneer at my pursuit; but,
Go! great sum! [integral of a to the power u to the power n with respect to u] is more dignified.
Adsum, nugator, suge!
is addressed to a student who continues talking after the lecture has commenced:
Graduatus sum! nego
applies to one who declined to subscribe for an M.A. degree.

In Budget of Paradoxes (1872), 82. [The Latin phrases translate as, respectively, Such action will start arguing with taste, Here babbler suck! and I graduate! I reject. Webmaster]