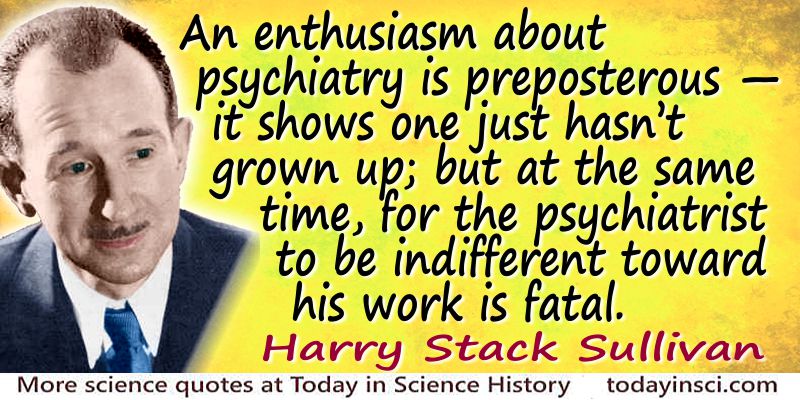 “An enthusiasm about psychiatry is preposterous — it shows one just hasn’t grown up; but at the same time, for the psychiatrist to be indifferent toward his work is fatal.”
— Harry Stack Sullivan
The Psychiatric Interview (1954, 1970), 10.

“If you do not feel equal to the headaches that psychiatry induces, you are in the wrong business. It is work - work the like of which I do not know.”

He concludes the paragraph with:

“So an enthusiasm about psychiatry is preposterous—it shows one just hasn’t grown up; but at the same time, for the psychiatrist to be indifferent toward his work is fatal. The more dependable attitude of the psychiatrist in a psychiatric interview is probably simply to have a very serious realization that he is earning his living, and that he must work for it.”

The beginning of Sullivan’ paragraph on the psychiatrist’s work is shown on this page, with the quote that begins, “There is no fun in psychiatry…”.