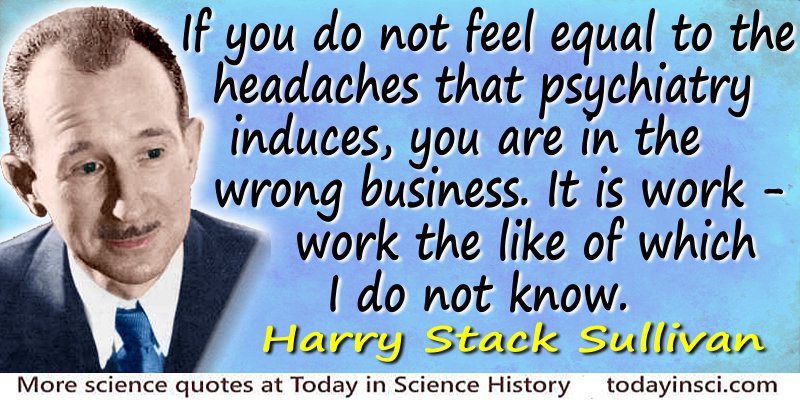 “If you do not feel equal to the headaches that psychiatry induces, you are in the wrong business. It is work - work the like of which I do not know.”
— Harry Stack Sullivan
From The Psychiatric Interview (1954).

“If you do not feel equal to the headaches that psychiatry induces, you are in the wrong business. It is work - work the like of which I do not know. True, it ordinarily does not require vast physical exertion, but it does require a high degree of alertness to a sometimes very rapidly shifting field of signs which are remarkably complex in themselves and in their relations. And the necessity for promptness of response to what happens proves in the course of a long day to be very tiring indeed. It is curious, but there are data that suggest that the more complicated the field to which one must attend, the more rapidly fatigue sets in. For example, in dealing with a serious problem in a very competent person, the psychiatrist will find that grasping the nuances of what is reserved, and what is distorted, and what is unknown by the communicant but very relevant to the work at hand, is not easy.”

For the conclusion of this paragraph on Sullivan's view of his work, see this page on his quote which begins, “Enthusiasm about psychiatry is preposterous.”