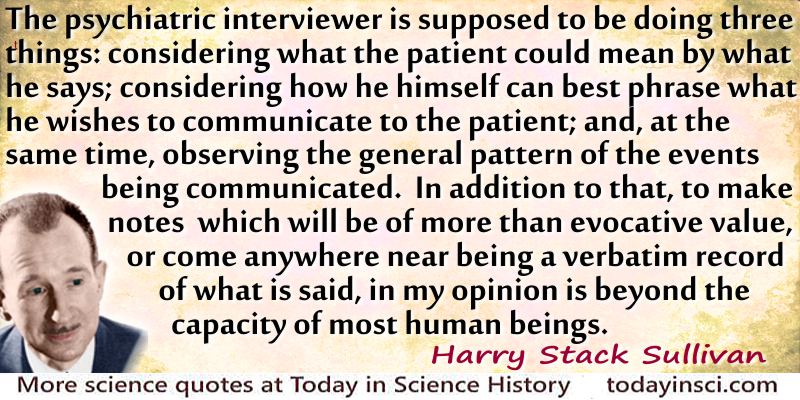 “The psychiatric interviewer is supposed to be doing three things: considering what the patient could mean by what he says; considering how he himself can best phrase what he wishes to communicate to the patient…”
— Harry Stack Sullivan
From The Psychiatric Interview (1954, 1970), 48

In his book, The Psychiatric Interview, Harry Stack Sullivan describes the task of taking meaningful notes while meeting with a patient, but confesses:

…if enough attention is paid to them so they are legible, this is very apt indeed to interfere with things of much greater importance to the patient if not to the psychiatrist.”

Then he puts this in context of the greater goals:

“The psychiatric interviewer is supposed to be doing three things: considering what the patient could mean by what he says; considering how he himself can best phrase what he wishes to communicate to the patient; and, at the same time, observing the general pattern of the events being communicated. In addition to that, to make notes which will be of more than evocative value, or come anywhere near being a verbatim record of what is said, in my opinion is beyond the capacity of most human beings.”

He continues to explain that the first necessity is to put the patient at ease:

“Even if the interviewer were able to do all this, when he deals with patients who are quite suspicious, even paranoid, in their attitudes, the making of notes will probably guarantee that the interviewer hears an exceedingly studied group of communications, in which all the nuances which he might otherwise catch on to are missing. Nevertheless, there are occasions—for example, when I am getting the gross social data about a person—when I do feel I should have a few notes. On such occasion I tell the patient that I have really a gift for forgetting things that might be handy, and therefore, if he doesn’t mind, I shall make a few notes…”