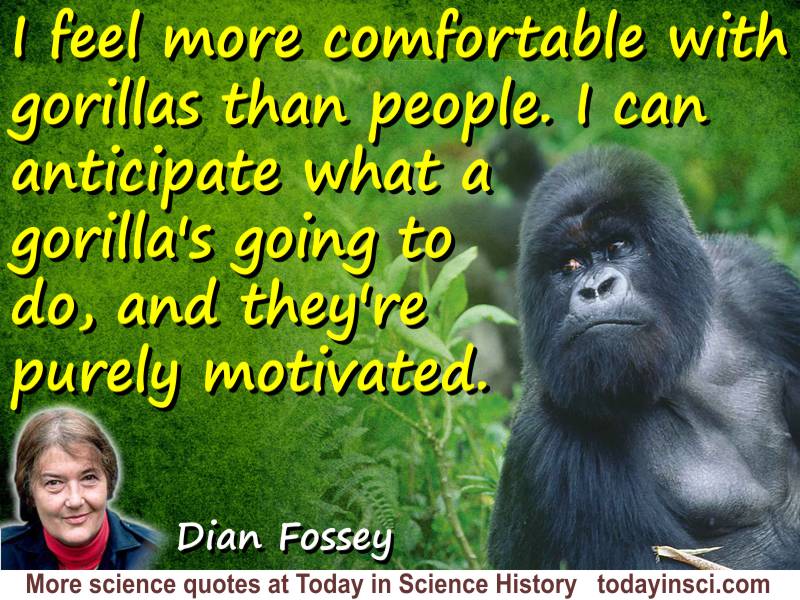 “I feel more comfortable with gorillas than people. I can anticipate what a gorilla's going to do, and they're purely motivated.”
— Dian Fossey
In New York Times (1981)

This quote appears in an article by Nan Robertson written as a “Special to the New York Times.” The journalist was covering the week-long symposium on the Sweet Briar College campus, which brought together three famed primatologists: Dian Fossey, Jane Goodall and Biruté Galdikas. They were at the meeting to talk about “What We Can Learn About Humankind From the Apes.” The reporter managed to interview them in conversations “wedged between lectures and gala meals.”

Competing with the sound of a nearby cocktail party in the Sweet Briar president's house, the reporter spoke with Dr. Fossey, who had put her hands over her ears, complaining, “I can't stand the noise back here.” She compared “the silence of the forest.” The article continued quoting Fossey:

“I feel more comfortable with gorillas than people. I can anticipate what a gorilla’s going to do, and they're purely motivated. It is true that there comes a time when I do literally dream about McDonald’s. I dream of supermarkets and drug stores, potato chips and the Sunday morning paper. That's the beginning and the end of it.”

The article concluded with a similar sentiment from Dr. Goodall:

I don't care two hoots about civilization. I want to wander about in the wild.