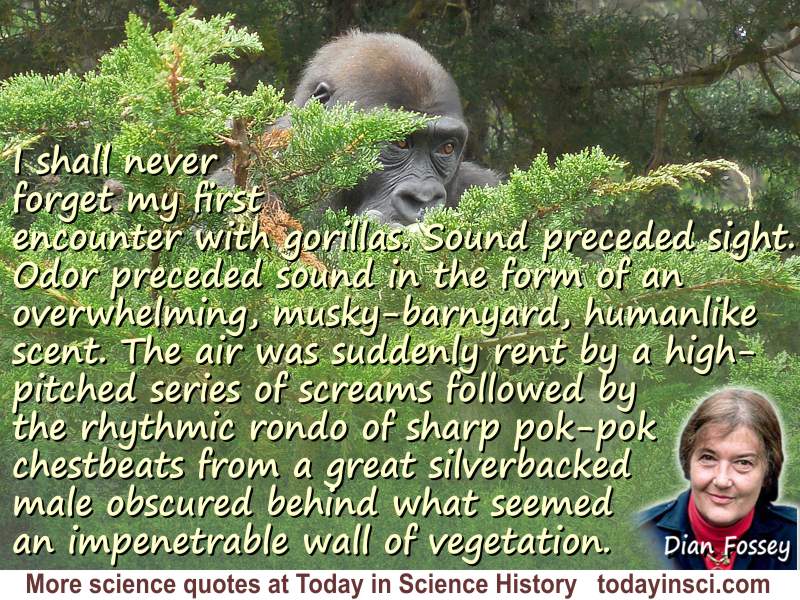 “I shall never forget my first encounter with gorillas. Sound preceded sight. Odor preceded sound in the form of an overwhelming, musky-barnyard, humanlike scent.”
— Dian Fossey
From Gorillas in the Mist (1983)

The quote comes from early in the first chapter of Dian Fossey's well-known biographical book, Gorillas in the Mist. She had flown in September 1963 to Africa to see the mountain gorillas of Mt. Mikeno in the Congo. She first met with anthropologists Louis and Mary Leakey excavating at Olduvai. From there she went to Kabara in the Virungas mountains, and was led into the forest by photographers Joan and Alan Root, then filming a documentary on the mountain gorillas.

“I shall never forget my first encounter with gorillas. Sound preceded sight. Odor preceded sound in the form of an overwhelming, musky-barnyard, humanlike scent. The air was suddenly rent by a high-pitched series of screams followed by the rhythmic rondo of sharp pok-pok chestbeats from a great silverbacked male obscured behind what seemed an impenetrable wall of vegetation.”

They froze until the sounds faded and crept forward through the vegetation and saw “an equally curious phalanx of black, leather-countenanced, furry-headed primates peering back” at them.

“Immediately I was struck by the physical magnificence of the huge jet-black bodies blended against the green palette wash of the thick forest foliage.”

The screams and chest-beating were of alarm, not ferocity, and the male gorillas remained as curious to view the visitors with the movie camera as they were to capture a record of the gorillas. The great apes obligingly displayed various actions whether for intimidation or “as if competing for attention.” Already Fossey interpreted their individuality and even shyness. She was left with a captivating impression from that first encounter when her short stay ended and Fossey reluctantly returned her job in America. She was already in no doubt that she would “return to learn more about the gorillas of the misted mountains.”