Derek Ager
“The earth, like the life of a soldier” 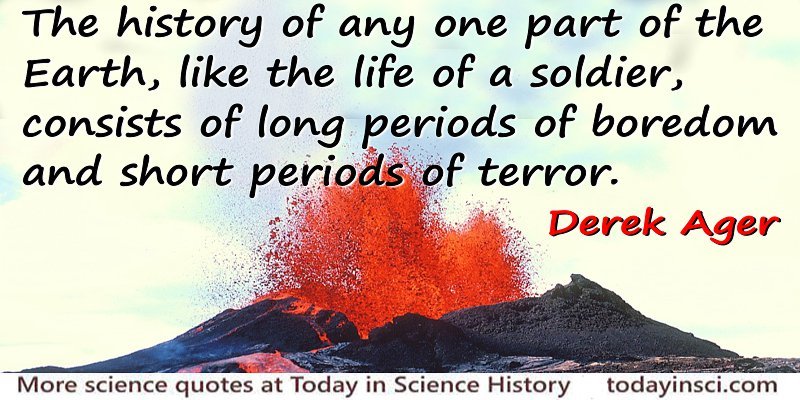 “The history of any one part of the earth, like the life of a soldier, consists of long periods of boredom and short periods of terror. ”
— Derek Ager
In The Nature of the Stratigraphical Record (1973).

In Derek Ager’s book, The Nature of the Stratigraphical Record, the subject quote comes from his concluding paragraph:

“The final conclusion I come to therefore is that, though the theories of plate tectonics now provide us with a modus operandi, they still seem to me to be a periodic phenomenon. Nothing is world-wide, but everything is episodic. In other words, the history of any one part of the earth, like the life of a soldier, consists of long periods of boredom and short periods of terror.”

In his Preface, he gave his rationale for writing the book: “because the ideas it contains have been fermenting in my brain for years and I had to write them down,” as his personal “commentary on the general pattern of earth history.” He admitted, “it is stratigraphy looked at by a non-stratigrapher.” Here, in his opening of the book, he made his first reference to a soldier when justifying his interpretations as a non-stratigrapher:

“I can offer the excuse that the non-combatant usually has a clearer picture of the battle than the soldiers actually engaged in the fighting.”


Text by Webmaster with quotes from The Nature of the Stratigraphical Record (1973), pages 100 and xiii. (source)