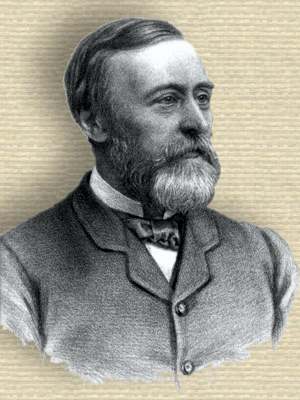 [p.120] Thomas Clifford Allbutt is a native of Dewsbury. He was born at the Vicarage there in the year 1836. His father, the Rev. Thomas Allbutt, a clergyman exercising considerable influence in the West Riding of Yorkshire, and an author of educational works, was for many years vicar of the ancient town of Dewsbury, and afterwards rector of Debach, in Suffolk. Interesting historical associations cling around Dewsbury. It was in the township of Hartshead-cum-Clifton, in the parish of Dewsbury, that the famous outlaw and archer, Robin Hood, found a last resting place. The exploits of this notorious freebooter have been a favourite theme of our ballad minstrelsy. He was the most distinguished in his time of those numerous outlaws who, under the tyrannical government of the early Norman kings, lived in bands in all the great forests, and combined a sort of championship of the old national independence with the practice of deerstalking and robbery. The epitaph upon the tomb of this famous personage designates him as Robert, Earl of Huntingdon, but whether he was of noble lineage or of lowly parentage is a question about which there exists considerable doubt.

The Dewsbury of to-day is a place of rising importance in the world of manufacture; its factories producing woollen cloths, carpets, rugs, jerseys, and blankets in abundant supplies. But the ancient importance of Dewsbury is connected more with ecclesiastical than civil history, and it is in this connection, therefore, that our subject’s name may be said to be grafted into the history of the progress of Christianity in this country. His father was for many years vicar of this important town. The living is in the gift of the Crown, and the following livings, with many others, are in the gift of the Vicar of Dewsbury :—St. Matthew’s, West Town; vicarage with residence. St. John’s, Dewsbury Moor; vicarage. St. Philip’s, Leeds Road; perpetual curacy. In the Rev. Thomas Allbutt’s time the Vicar of Dewsbury was patron of eleven livings.

At the time of the Saxons Dewsbury was one of the most extensive parishes in England, and comprised an area of four hundred square miles. Dewsbury was the centre from which Christianity was diffused through this part of the island in Saxon times; the name is supposed by some to have been derived from its Saxon proprietor; others suppose that the success of the preaching of Paulinus (St. Paulinus), the first Archbishop of York, caused the place of his residence to be called Duisborough—God’s town.

For three generations Dr. Allbutt’s family had been the proprietors and editors of an influential newspaper in the Midland Counties, and his great-grandfather was one of the earliest contributors to the “Gentleman’s Magazine,” and a considerable scholar.

Many relatives of our present subject were connected with medicine, and two of his father’s brothers were members of the medical profession.

Thomas Clifford Allbutt was educated first in the Isle of Wight, under a private tutor, and afterwards at St. Peter’s, York, under the Ven. Archdeacon Hey, with whom and the various members of whose family he contracted a strong and lasting friendship. He went to Caius College, Cambridge, in 1855, and was Classical Scholar in his first year. Turning his attention to medicine, he obtained the Perse and Mickleburgh Scholarships and graduated in the Science Tripos, first-class with honours in 1860, with distinctions in Chemistry and Geology. At that time Fellowships were not granted for science, but Mr. Allbutt received, as substitute, an annual grant from the college. In 1859 he went to St. George’s Hospital, where he derived especial advantage from the teaching of Bence Jones, with whom he was associated, as clinical clerk, for nearly twelve months, and by whose advice he placed himself under Trousseau, with whom he enjoyed special opportunities of friendship and instruction. Clifford Allbutt expresses a feeling of cordial admiration and friendship as having been entertained by him [p.122] towards Bence Jones when at the St. George’s School of Medicine. Mr. Allbutt also spent some considerable time with Bazin at St. Louis, and conceives himself to this day as being under deep obligations of gratitude to that teacher. He was one of the first to endeavour to popularize the views of the great dermatologist in England. He became a member of Duchenne’s Clinique in the Boulevard des Capucins at the time when that great clinician was working out his observations on nervous diseases, and the friendship thus formed lasted until the great teacher’s death. A warm student’s friendship also sprang up between Allbutt and the accomplished Maurice Raynaud, whose recent early death was such a loss to medicine and to literature. M. Raynaud was at the time Interne at the Neckar, with the teaching of which hospital on women and children’s diseases Allbutt was closely connected. On his coming to Leeds in 1861, Dr. Clifford Allbutt was elected Physician to the Leeds Fever Hospital, taking sole honorary charge of that institution for several years, during which time severe epidemics of typhus fever occurred. Struck by a remark of his friend, Professor Rolleston, that in the Irish poor so many victims recovered who had actually been laid out in the open air to die there, Dr. Allbutt had the whole of his ninety patients put under similar conditions by nailing the windows of the ward wide open. Ample bed-clothing was supplied, large fires were kept up, and the attendants were warmly clothed. The origin and results of this system, in the marked diminution of mortality, we find in a paper by Dr. Allbutt on the subject read to the Epidemiological Society in 1862, which attracted much attention from the sanitary authorities of the day. We read that he also endeavoured to remove the cause of these epidemics by promoting a company to build blocks of houses for the working classes in Leeds, and by forming the “Leeds Sanitary Association,” which did a great work in Leeds for several years, and ultimately secured the election of a medical officer of health and the formation of a more active sanitary department in the Town Council.

Allbutt was at this time a more or less regular contributor to the “Quarterly,” “Westminster,” and other reviews, and formed close friendships with Lewes and Mrs. Lewes, and other eminent writers of the day. On his election, however, to the Leeds Infirmary in 1864, he threw his whole energies into clinical teaching, and formed large and successful classes at a time when systematic clinical teaching was less well known than at present. He was an indefatigable worker and a copious writer. His most important early work was the “Treatise on the Ophthalmoscope in its relations to Medicine,’ which had a considerable success at the time.


He also introduced the short clinical thermometer, which was the means of bringing clinical thermometry into the daily work of ordinary medical practice. We find, among other original and early contributions, Dr. Allbutt published “Researches on Infantile Palsy and on the Pathology of Tetanus and Hydrophobia; “a description of the first case of Charcot’s Joint Disease recorded in England, and so on. As an old and still active member of the Alpine Club, Dr. Clifford Allbutt has read papers to the Royal Society on the effects of exercise upon the temperature of the body, and has been largely instrumental in bringing before the profession the mountain cure of phthisis.


With Mr. Wheelhouse, in 1866, he brought the operation of paracentesis pericardii within the sphere of practical medicine, and more recently he embodied the results of the large experience of the Leeds Infirmary in the article on “Diseases of the Pleura” in Quain’s Dictionary. With Mr. Teale he published at the Medical Congress in London an important communication on the treatment of scrofulous glands, and has returned to this subject more than once since. We observe that in 1871 he published a series of lectures on physical overstraining of the heart, which were translated into German by Dr. Seitz; and in 1875, articles on auscultation of the oesophagus, and on the treatment of dilatation of the stomach by the washing-out system. The author’s recent Gulstonian Lectures on visceral neuroses were so cordially welcomed at home and in America that we need but refer to them in this place.

Dr. Clifford Allbutt lately retired from the duties of Physician to the Leeds Infirmary, which had become almost impossible to him under the strain of private engagements, and was elected Consulting Physician to that institution. He is also an acting magistrate of the West Riding of Yorkshire.