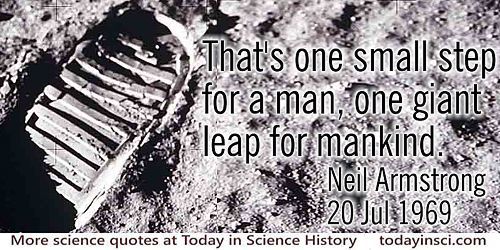 The scripted line, prepared for Neil Armstrong to deliver as he stepped from the ladder of Apollo 11’s landing module onto the lunar surface was slightly different. It included one more small word, the indefinite article, “a”. It clearly makes more sense if spoken as:

“That's one small step for a man; one giant leap for mankind.”

Yes, it was a slip of the tongue, quite understandable in the excitement of the moment. Upon his return to Earth, Armstrong tried to correct the record in the transcript, and it has been reported that NASA even invented the fiction that “static” had caused the apparent loss of the “a” in the transmission. It was recalled in the form “a man” when published in the book, First on the Moon.

It has also been stated that reporters present at Mission Control in Houston at the time of the live broadcast, discussed what they thought they had actually heard, and agreed they would all report in agreement just the one form of the quote—with “by man” and not “by a man.”

Years later, no reliable technological analysis of the original recording has been able to find the missing “a” and Armstrong conceded that despite so much rehearsal, even believing at first he must have said it correctly, the truth was it was not spoken.

But, who would not wish to accept both versions, the one recorded, and the one intended?


This text by Webmaster, summarizes the greater amount of explanation given (with references) in the article, 'One Small Misstep', on the snopes.com website. (source)