From Rock Quarrying for Cement Manufacture (1918) 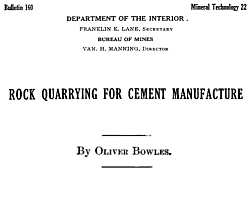 In 1824, Joseph Aspdin, of Leeds, England, received a British Patent (No. 5022, issued 21 Oct 1824) for a product which he named "Portland cement" because the set cement resembled the oolitic limestone of Portland, England. The specifications for the new cement were somewhat vague; a very pure limestone was to be burned to lime, the lime mixed with a definite quantity of clay, and the mixture pulverized wet. The wet mixture was to be dried and crushed and then calcined in a vertical kiln and finally the calcine was to be powdered. The patent does not state what proportions of lime and clay should be used, nor at what temperature the mixture should be burned.

The manufacture of Portland cement began in England and on the Continent shortly after the patent was issued. However, at the time natural cement was widely used, and as it could be manufactured more cheaply than Portland cement, the growth of the latter industry was very slow. 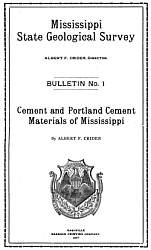 Portland cement was first made in 1824 by Joseph Aspdin, a bricklayer in Leeds, England. The name "Portland" was chosen because of the resemblance of the cement to the oolitic limestone of Portland, England. The limestone is extensively used in England as a road metal and building stone.

The first cement was made by taking a specific quantity of road scrapings from roads repaired with the oolitic limestone and reduced to a powder and calcined. The calcined material was then combined with a specific quantity of argillaceous earth or clay, mixed with water, and the mixture placed in a pan and heated until all the water was evaporated. After this the mixture was broken into small lumps and calcined in a furnace similar to a lime kiln till the carbonic acid was entirely expelled. It was then cooled and reduced to a powder which had the power of setting when mixed with water.

Aspdin's original patent did not specify the percentages of limestone and clay in the mixture, and he also omitted to state that the mixture should be burned until incipient vitrification is attained. In the absence of machinery for grinding the hard limestone, he was forced to calcine it before it was mixed with the clay.

From this crude beginning has developed one of the greatest industries of building material of modern times.

An Improvement in the Modes of Producing Artificial Stone

My method of making a cement or artificial stone for stuccoing buildings, waterworks, cisterns, or any other purpose to which it may be applicable, (and which I call Portland cement), is as follows: I take a specific quantity of limestone, such as that generally used for making or repairing roads and I take it from the roads after it is reduced to a puddle or powder, but if I cannot procure a sufficient quantity of the above from the roads, I obtain the limestone itself, and I cause the puddle, or powder, or the limestone, as the case may be, to be calcined. I then take a specific quantity of argillaceous earth or clay, and mix it with water to a state approaching impalpability, either by manual labour or machinery. After this proceeding I put the above mixture into a slip pan for evaporation, either by the heat of the sun, or by submitting it to the action of fire or steam conveyed in tines or pipes under or near the pan, till the water is entirely evaporated. Then I break the said mixture into suitable lumps, and calcine them in a furnace similar to a lime kiln, till the carbonic acid is entirely expelled. The mixture so calcined is to be ground, beat, or rolled to a fine powder, and is then in a fit state for making cement or artificial stone. This powder is to be mixed with a sufficient quantity of water to bring it into the consistency of mortar, and thus applied to the purposes wanted.