The Iron Dome of the Capitol

[Science students usually learn that the result of thermal expansion requires architects designing long bridges to include expansion joints. A more interesting example of thermal expansion is the way the statue moves during throughout day on top of the iron dome of the Capitol building in Washington, D.C.] 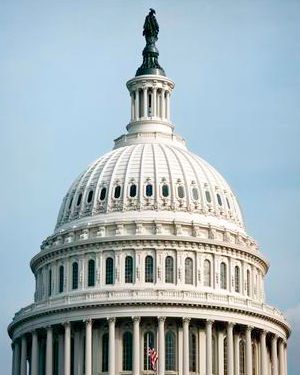 [p.289] THE iron dome of the Capitol at Washington is 300 feet high, and is surmounted by a metallic statue. In reply to an inquiry as to whether there was a daily movement of the statue, due to the heat of the sun, the architect, Mr. Clark, gives the following particulars:

“The statue on the Capitol has a motion resulting from the unequal expansion of the opposite sides of the dome. The entire length of the line of oscillation of the plummet from the eastern limit to the western limit is only four and a half inches, which would make the inclination in the morning two and a quarter inches to the west, and in the afternoon the same distance to the east. This apportionment of the distance for morning and evening, however, is not strictly correct, and for this reason: that in the morning the east side of the dome is rapidly heated, while the west side is chilled by radiation through the night. Now, as the sun passes to the western side of the dome, this side is heated, but as the east side still retains a good portion of its heat, the expansion is more nearly [p.290] equalized on both sides, and the inclination of the statue to the earth to some extent counteracted, so that the inclination to the west is a little greater than that toward the east. The variation is probably about the same all the year round, the extra contracting by cold on one side of the dome during the winter producing the same effect as the extra degree of expansion by heat on the other side in the summer.”