Roger Bacon
Context of quote “There is another alchemy” 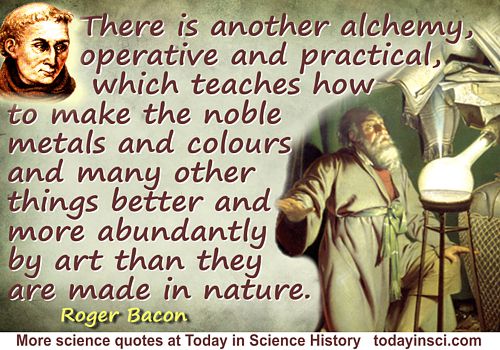 “There is another alchemy, operative and practical, which teaches how to make the noble metals and colours and many other things better and more abundantly by art than they are made in nature.”
— Roger Bacon
In Opus Tertium.

This translated version of the quote is given by Alistair Cameron Crombie in his The History of Science from Augustine to Galileo. It comes from Roger Bacon's Opus Tertium. Crombie states that “Roger Bacon, having discussed speculative alchemy, goes on to say:”

“But there is another alchemy, operative and practical, which teaches how to make the noble metals and colours and many other things better and more abundantly by art than they are made in nature. And science of this kind is greater than all those preceding because it produces greater utilities. For not only can it yield wealth and very many other things for the public welfare, but it also teaches how to discover such things as are capable of prolonging human life for much longer periods than can be accomplished by nature … Therefore this science has special utilities of that nature, while nevertheless it confirms theoretical alchemy through its works.”

Crombie comments on Bacon's insight that “in his conception of the immediate use of science he had almost the outlook of the 19th century.”