Be it known that I, Howard Turner Barnes, of the city of Montreal, in the county of Hochelaga, Province of Quebec, Canada, a subject of the King of Great Britain, have invented certain new and useful Improvements in Methods of Loosening Ice Accumulations, of which the following is a specification.

In cold climates a great deal of trouble is experienced with accumulations of ice in rivers supplying water for hydraulic power development. This is mainly due to accumulations, beneath the surface ice, of ice in a flocculent form such as frazil ice which forms in suspension or anchor ice which forms on the bottom and sides of a channel. Where ice particles in water are carried into quiet pools or wide lakes which are covered with surface formed sheets, the small particles float upward and become attached to the underside of the surface sheet, forming after a time great hanging dams which quickly reduce the free passage of water by blocking the channels. So far, it has been found practically impossible to destroy these ice jams when once formed and the shutting down of power plants dependent on the water supply, naturally follows.

As the result of long continued experiments, I have found that ice forms in or under the surface of water only when the temperature of the water is reduced a minute fraction of a degree below the freezing point 0° Cent, or 32° F., and under conditions which frequently obtain in our rivers and in very cold weather this super-cooling takes place. Once the frazil or anchor ice has been formed it tends to persist in agglomerated form until a mild spell occurs and enough heat is thus supplied to it to overcome the effects of the super-cooling. It follows then that by preventing this supercooling the formation of a jam may be prevented and that, by raising the temperature of a mass of such ice when formed, the bond of the ice particles may be loosened and a jam broken up. 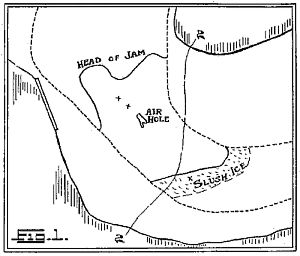 My object, therefore, was to devise a method of and means for quickly raising the temperature of considerable masses of ice so as to loosen the bond of the myriads of ice particles, without necessarily melting them, thus weakening the structure of the jam sufficiently to enable the flow of water to break it up. For any such method to be practicable, the means for carrying it out require to be available for use at a moment's notice and to be readily and easily transported to the scene of action.


I have further found that the necessary heat must be supplied at a very high temperature so that it will diffuse very rapidly over a wide area. The temperature is preferably so high that a large proportion of radiant heat and light is generated and also high enough to disassociate water into its gaseous elements.

I attain my object by using what may be termed “thermal mines,” that is devices adapted to contain chemical re-agents Which may be ignited and will then combine with a violent exothermic reaction. Satisfactory results have so far been obtained by employing the material known commercially as “Thermit,” which is a mixture of iron oxide (Fe3O4 and aluminum in a pulverulent condition. Containers, such as hereinafter described, are filled with a charge of 100 lbs. of thermit, and one or more of such containers are sunk into the ice mass to a greater or less depth as determined by circumstances. Satisfactory results have been attained with the charges located at depths of from 4 feet to 20 feet, depending on the depth of the ice.

When such a charge is ignited, a molten mass is formed of a temperature approximating 4000° F. to 5400° F. and the transfer of heat from this mass to the ice takes 90 place with great rapidity and with explosive violence.

How this heat is transmitted through the ice and dissipated is not at present known but it appears probable that it is partly by radiation and partly by conduction and also that there is actual disassociation of water into its elements, the oxygen and hydrogen subsequently re-uniting more or less explosively.

The immediate effects of the ignition of such a charge are found to be wide spread but the full effects are not immediately felt, and the action of the generated heat in loosening the ice may continue for a period of twenty-four hours after the ignition of the charge. The effectiveness of such thermal mines was demonstrated by experiment in the case of an ice jam which had formed in the channel of the St. Lawrence River at the pulp dock at Waddington, N. Y., between the main shore and Thompson's Island. This jam was approximately 1000 feet in length and 500 feet in width, the depth of ice varying from 6 inches to 43 feet, while the head, foot and sides of the jam were solidly lodged on the bottom. Three charges were ignited in this mass at points hereinafter more particularly set out and illustrated in the accompanying drawings in which—

Fig. 1 is a chart of an ice jam between the pulp wood dock at Waddington, N. Y., and Thompson's Island, illustrating the use of my method;

Fig. 3 a longitudinal section of a thermal line suitable for use in removing ice jams according to my method.

In the drawings like numerals of reference indicate corresponding parts in the different figures. 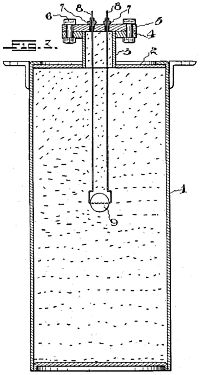 The mine comprises a metal cylinder 1, which, in the case of a mine intended to carry a 100 pound charge of thermit, is 10 inches inside diameter and 22 inches in height The exact weight of material employed does appear to be important, as satisfactory results have been obtained with cylinders of #22 gauge sheet steel and containers formed of one-quarter inch plate. The top 2 of the container is provided with a 2 inch nipple 3 having an annular flange 4 formed at its upper end. A cover 5 is secured to this flange by means of the bolts 6 after the container has been filled with the thermit. In the cover 5 are formed openings provided with stuffing box glands 7. Through these openings are led insulated wires 8, the openings being made tight by suitable packing compressed by the glands. These wires terminate towards the centre of the container in an ignition element 9, which may be formed of any material which, on igniting, will raise the temperature of the surrounding thermit sufficiently for ignition.

This ignition element preferably comprises a small amount of ignition powder made into a solid ball and containing a heating wire adapted to be heated by current supplied through wires 8. Such ignition elements, being well known in the art, need no further description.

Each drum is preferably provided with four 2 inch angle iron clips 10 substantially flush with the top facing of the drum. In practice two lengths of 2x4 inch timber are bolted to these clips in order to facilitate sliding the drums to the position in which they are to be used.

In the carrying out of my process in the instance hereinbefore referred to, two locations were selected in the ice jam near its head and in the centre of the channel, and in the third point at the foot of the jam also in midchannel, these locations being indicated by the crosses in Fig. 1. The first mine was lowered to a depth of about eight feet and suspended by wires to stakes fastened in the ice. The second was similarly suspended at a depth of about four feet, while the third at the foot of the channel jam was suspended at a depth of about twenty feet. These charges were successively fired at considerable intervals and some hours after the firing of the last mine the whole jam came away and moved down the river leaving the channel perfectly clear.

It will be understood, of course, that in every case judgment must be exercised in selecting the proper points for the use of the mines having due regard to the channel contours.

In the destruction of icebergs my process of combating ice will prove of great value.

If one or more thermal mines be ignited in a position well below the surface, local strains are set up, in various ways, which effect the splitting of the berg.

What I claim is:

1. A method of combating ice which consists in bringing into contact with it a hot mass adapted to give off a large quantity of heat at a very high temperature, the heat transference being sufficiently rapid to cause an explosive reaction between the hot mass and the contacting ice.

2. A method of combating ice which consists in bringing into contact with it a hot mass adapted to give off a large quantity of heat at a very high temperature, the heat transference being sufficiently rapid to cause an explosive reaction between the hot mass and the contacting ice and the quantity great enough to raise the temperature of a mass of ice very considerably relative to the aforesaid hot mass.

3. A method of combating ice which consists in effecting an exo-thermic chemical reaction in the ice below the surface to generate heat at a sufficiently high temperature to enable it to diffuse quickly through a considerable mass.

4. A method of combating ice which consists in effecting an exo-thermic chemical re-action in the ice below the surface to generate heat at a sufficiently high temperature, and in sufficient quantity, to enable it to diffuse quickly and extensively through a considerable mass.

5. A method of combating ice which consists in effecting an exo-thermic chemical re-action in the ice below the surface to generate sufficient heat to slightly raise the temperature throughout a considerable mass.

6. A method of combating ice which consists in igniting a charge of thermit in the ice below the surface in sufficient quantity to produce heat sufficient to diffuse quickly and extensively through a considerable mass.

7. A method of combating ice which consists in effecting an exo-thermic chemical reaction in the ice below the surface to produce heat therein in large quantity and at a temperature approximating 4,000° F. or more.

8. A method of combating ice which consists in igniting a charge of thermit in the ice below the surface to produce heat therein in large quantity and at a high temperature.