From: The Manufacturer and Builder, May 1878 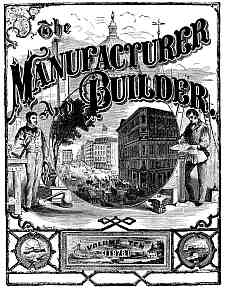 Milk can be preserved in three ways; one is to evaporate most of its water, so as to leave a thick emulsion of the casein, butter, milk, sugar, and salts. This is best done by means of a vacuum pump, aided by moderate heat; such milk will keep at least three or four times as long as milk not thus treated.

The next method is to mix such milk with white sugar, of equal bulk, when it may be preserved for weeks, and, in air-tight vessels, even for years.

The third method is to dry entirely the latter mixture of milk and sugar, by evaporating all the water, until it assumes a granular state. We have such milk from the World's Fair held in New York in 1852, and it is still in good condition, notwithstanding it is only kept in a wide-mouthed, glass-stoppered jar, and has often been opened.

Gail Borden first introduced, nearly 20 years ago, condensed milk in New York city, and its use has been steadily increasing ever since. In a short time competition sprang up, and the first competing condensed milk company, laboring under the impression that the patent secured by Mr. Borden to condense the milk in a vacuum pan was unassailable, condensed the milk by heat, agitation and air currents; a paddle-wheel, like that of a steamboat, threw the milk upward, while an air current traversed the spokes, so as to remove rapidly the watery vapors evolved. These air currents caused so rapid a cooling that the method was very wasteful in regard to the consumption of fuel; but this was not all, a more serious drawback became apparent—the milk thus condensed did not keep longer than non-condensed milk, and was in this respect far inferior to Borden's, which keep good four times as long.

The editor of this journal, who was at that time (1862) Professor of Chemistry in the Cooper Institute, was consulted in regard to the cause of this difficulty, and the suspicion was expressed by the competing condensed milk company that Mr. Borden, contrary to his declarations, put an alkali into his condensed milk, so as to counteract the tendency of all milk to become sour. We knew better than this, as we had analyzed Mr. Borden's condensed milk a few years before, at his request, and given a testimonial in regard to its purity. But in order to satisfy all, we made another analysis of the milk as sold at that time by the Borden firm, and found it to agree perfectly with the best normal cow's milk from which most of the water had been removed; so that there was another cause for the difference, and this had to be found out. As the result of this investigation carries an instructive lesson with it we will here publish it.

We placed two samples of the condensed milk (one of Borden's and one of the competing company's) under the bell-jar of an air-pump, and on exhausting the air the first-named milk did not show anything particular, while the other milk swelled up to an enormous bulk, as if boiling, and gave off numerous air bubbles. Here at once the cause of the trouble was revealed. The Borden milk had, with its waters also the air removed, of which the oxygen is especially absorbed by liquids which come in contact with the same; while in the milk of the competing company, on the contrary, not only was the air not removed, but oxygen was incorporated by the combined effects of the stirring and air currents, intended only to remove the water, but which in exchange gave to the milk a dose of oxygen—in fact, saturated the milk with it. It is not surprising then that it soon turned sour, especially when prepared during seasons when thunder-storms were making the atmosphere rich in ozone.

Our advice therefore was to abandon the stirring process, or at least to submit the milk, after being condensed according to their method, to the operation of a vacuum, so as to remove the objectionable air which it had absorbed. This was done, especially when it was found that our opinion was correct in regard to the value of the Borden patent. We held, namely, that nobody could uphold a patent claim to evaporate any fluid by means of a vacuum pump, as this is an old and well-known process, applied to sugar refineries, the making of extracts, and scores of other industrial operations.

There are now several condensed milk companies operating in New York city, and others in most large cities of the United States while the advantages of its use are more and more universally acknowledged.