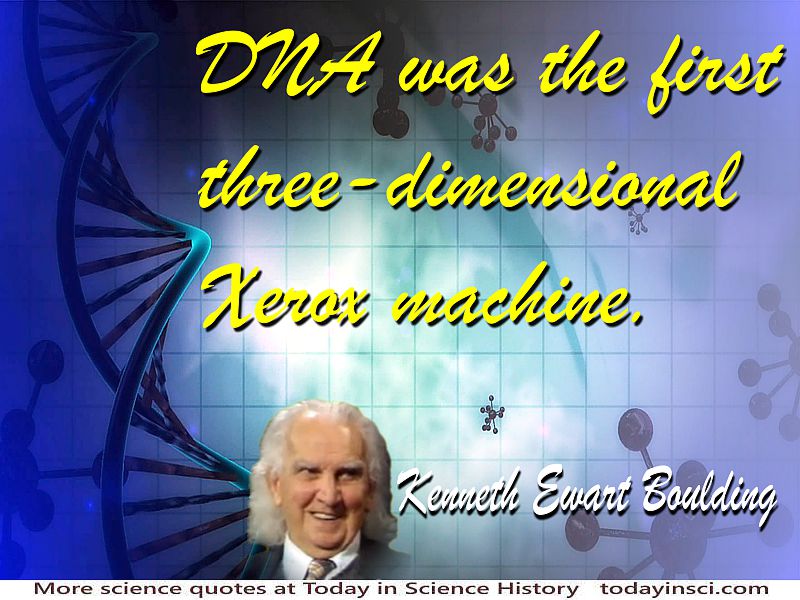 With an excellent secondary education at a college preparation school, Kenneth Boulding won a Chemistry scholarship to Oxford University, though after a year he switched to the School of Politics, Philosophy, and Economics. He became not only an extraordinary economist, but also his diversity of interests as an interdisciplinary scholar enabled him to contribute valuable insights to diverse subjects such as ecology, biology, human behavior, ethics and general system theory. Thus it is no surprise to add he also served a term as president of the American Association for the Advancement of Science (1980).

The above quote about DNA comes from Boulding's paper 'Energy and the Environment' first presented in Jan 1976 at Laramie College of Commerce and Industry, University of Wyoming. It is one of many examples of his wit collected and edited by his former student Richard P. Beilock in Illustrating Economics: Beasts, Ballads and Boulderisms. (In a later paperback edition, the word “Boulderisms” in the title was changed to “Aphorisms.”)

As the collection in that book shows, Boulding was not one to produce dry texts on economics or his other interests. He laced his writings with wit, extraordinary imagery and the musings of one of the most original and versatile minds of the twentieth century.