Of the Soho Foundery, near Birmingham. 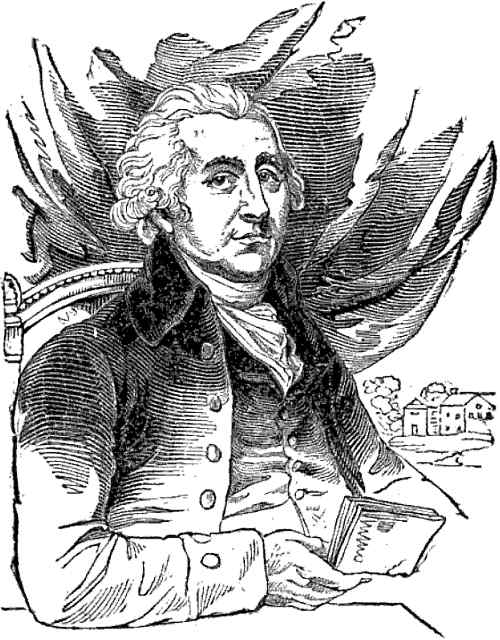 [p.328] IF genius and indefatigable industry, directed by the purest patriotism, have any claim to the notice of our readers, an account of this gentleman cannot but be highly acceptable. When we contemplate the enlarged extent of his views, the wide and rapid circulation of his improvements and discoveries in the most important branches of art, and the numerous and honourable connections which he has formed in every part of the civilized world, [p.329] we shall be obliged to admit that few men possess greater claims to the attention and gratitude of their country.

Matthew Boulton, son of Matthew Boulton, by Christian, daughter of Mr. Peers, of Chester, was born at Birmingham, the 14th of September, 1728. He received the chief part of his education at a private grammar school, kept by the Rev. Mr. Ansted, who officiated at St. John's Chapel, Deritend. So early as the year 1745, Mr. Boulton haying lost his father, who left him in flourishing circumstances, distinguished himself by the invention of a new and most ingenious method of inlaying steel. Buckles, watch chains, and a great variety of other articles, wrought at his manufactory, were exported in quantities to France, where they were eagerly purchased by the English, who affected to have no taste for the productions of their own country.

The confinement of a populous town was but ill suited to such an establishment as soon became necessary for Mr. Boulton's farther experiments. Accordingly, in the year 1762, he purchased those extensive tracts of common, at that time a barren heath, with only a small house and mill, on which the Soho manufactory now stands. He laid the foundation of his present extensive works, at the expence of 9000l. To this spot his liberal patronage soon attracted great numbers of ingenious men from all parts, and by their aid he so eminently succeeded in imitating the or molu, that the most splendid apartments in this and in many foreign countries received their ornaments from Soho. Here too the works of the greatest masters in oil colours were mechanically taken off, with such ease and exactness, that the original could scarcely be distinguished from the copy. This mode of copying was invented by the late Mr. Eggington, whose performances in stained glass afterwards introduced his name to public notice.

The utmost power of the water mill, which Mr. Boulton had hitherto employed, fell infinitely short, even with the aid of horses, of that immense force which was soon found necessary to the completion of his designs. Recourse was therefore had, about the year 1767, to that chef d'œuvre of human ingenuity, the steam engine. The first that Mr. Boulton constructed was on M. Savary's plan; but the machine was yet, as it were, in its infancy, and by no means answered Mr. Boulton's expectations. In the year 1769, Mr. James Watt, of Glasgow, obtained a patent for such a prodigious improvement of it, that Mr. Boulton immediately sought his acquaintance, and induced him to settle at Soho.

At this place the facility of its application to a variety of concerns, wherein great force was requisite, soon manifested its superior utility and vast advantages to the public; parliament, therefore, in 1775, cheerfully granted a prolongation of Mr. Watt's patent for twenty-five years. A partnership now commenced between Messrs. Boulton and Watt; and a manufactory of steam engines, on their improved plan was established at Soho, which still supplies the chief mines and manufactories throughout the kingdom. Aided by such talents, and commanding such unlimited mechanical powers, Mr. Boulton's views soon expanded, and Soho began to exhibit symptoms of the extraordinary advantages it had acquired.

The art of coining had long stood in need of simplification and arrangement, and to this art Mr. Boulton no sooner turned his attention, than about the year 1788, he erected a coining mill, on an improved plan, and struck a gold medal of the full weight of a guinea and of the same form as that of his new copper coinage lately put into circulation. The superior advantages of that form are obvious. The impression is far less liable to friction; and by means of a steel gauge of equal diameter, money coined on that principle, may be examined by measure as well as by weight, the rim being exactly circular. Moreover the intrinsic is so nearly equal to the current value of every piece, that, without a steam engine and adequate apparatus, every attempt to counterfeit the Soho coinage must be made with loss. The fabrication of base money seems likely, by these means, to be speedily checked, and, it is to be hoped entirely defeated.

The mill at Soho works eight machines, each of which receives stamps, and delivers out, by the aid of only a little boy, from seventy to ninety pieces of copper in one minute. Either of them is stopped without the smallest interruption to the motion of the others. In adjoining apartments all the preparatory processes are carried on with equal facility and dispatch; such as rolling the copper into sheets, dividing them into blanks, and shaking them into bags clean and ready for the die. Without any personal communication between the different classes of workmen, the blanks are conveyed to the room where they are shaken and from thence to the coining room in boxes, moving with immense velocity on an inclined plane, and accompanied by a ticket of their weight.

The Sierra Leone Company have employed Mr. Boulton's mint in the coinage of silver, and the East India Company in that of copper. He has also sent two complete mints to Petersburgh. Mr. Boulton having presented the late Emperor Paul I, with some of the most curious articles of his manufactory, in return received a polite letter of thanks and approbation, together with a splendid collection of medals, minerals from Siberia, and specimens of all the modern money of Russia.

With the view of still further improving and facilitating the manufactory of steam engines, Messrs. Boulton and Watt, in conjunction with their sons, established a foundery at Smethwick, a short distance from Soho. Here that powerful agent is employed, as it were, to multiply itself, and its various parts are fabricated and [p.330] adapted together with the same regularity, neatness, and expedition, which distinguish all the operations of their manufactory. Those engines are afterwards distributed to all parts of the kingdom by the Birmingham canal, which communicates with a wet dock belonging to the foundery.

It could scarcely be expected that envy would view with indifference such singular merit, and such unexampled success. The inventions and improvements of Messrs, Boulton and Watt were first imitated, and then either decried or disputed. Reason laboured in vain to silence the clamours of injustice, and to defeat the stratagems of fraud. At length, in the year 1792. a solemn decision of parliament, and, about the same time, the concurrent opinion of the Court of King's Bench, forbade any encroachment. The last discovery for which Mr. Boulton obtained a patent, was the important “Method of raising Water and other Fluids;” an ample description of which will be given in our next number.

Whoever contemplates the merit and utility of a long life devoted to such valuable pursuits, as we have here briefly and very imperfectly described, and recollects, without emotion, that the spot on which so much has been done, and is still doing; where hundreds of women and children easily earn a comfortable subsistence; where population is as rapidly increasing, and the means of national prosperity improving in proportion, was lately a bleak, swampy, and sterile waste, must want understanding to comprehend, or sympathy to appreciate, the happiness of his fellow creatures. To comment upon the private character of a gentleman in Mr. Boulton's situation, would he an useless task; we shall therefore only observe, that as his great and expanded mind formed and brought to perfection the wonderful works we have briefly endeavoured to describe, so he felt no greater felicity than that of diffusing happiness to all around him.

For a long time previous to his decease, he had been confined to his room by illness, and his dessolution daily expected. His memory will ever remain dear to the British nation, whose glory was advanced in proportion to his own fame.—While we commemorate those great men who have sought their country's honour in the fields of war, we ought not to omit paying a just tribute of applause to those who have promoted arts, industry, and commerce, and diffused plenty and comfort through the realm, by cultivating science, and applying it to the useful arts of peace.

He was buried on Thursday, 24th August, at Handsworth, near Soho. A hearse and nine mourning coaches attended, followed by numerous carriages of his friends. All the beadles in Birmingham rode on horseback, and kept open the way. The corpse, carried by three sets of bearers, was followed by 600 workmen, each of whom had a silver medal presented to him, struck for the occasion.