William Bragg
“Light brings us the news of the Universe” 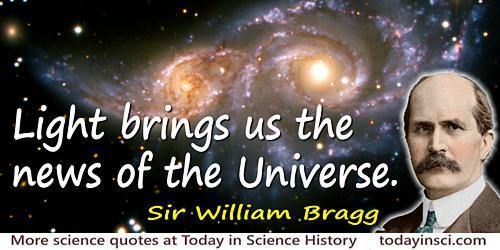 “Light brings us the news of the Universe.”
— William Bragg
The Universe of Light (1933)

>Sir William Bragg gave his book on optics an all-encompassing title: The Universe of Light. In his opening sentences of Chapter 1, Bragg writes the brilliant quote above, then expands upon it.

“Light brings us the news of the Universe. Coming to us from the sun and the stars it tells us of their existence, their positions, their movements, their constitutions and many other matters of interest. Coming to us from objects that surround us more nearly it enables us to see our way about the world: we enjoy the forms and colours that it reveals to us, we use it in the exchange of information and thought.”

Bragg then explain the meaning of the word “light”, as used by the physicist, is extended to a full spectrum of radiations invisible to the human eye. Light is the great conveyor of energy through the universe, including radio transmission, X-rays (then also known as “Röntgen rays), and certain radiation from radio-active substances (gamma rays), among others.

“These greatly differing phenomena are all manifestations of one principle, the magnificent inclusiveness of which has grown clearer continuously as we have studied the nature of light. … Even the atoms themselves seem to fall, in certain aspects, within the same great category. Light, therefore, using the full meaning of the word, transmits energy which is the mainstay of life, and gives to living beings the power of observation: and it is akin to the matter of which all things animate and inanimate are made. The universe is its sphere of action. We do it no more than justice when we speak of the Universe of Light.”

“The Universe of Light” was also the title of the series of Christmas Lectures that Bragg gave in 1931 at the Royal Institution. The book, which used the same title, is an introduction to optics for the general reader, and is essentially a revision and enlargement of those lectures.

Frederick J. E. Woodbridge contributed a glowing review of the book, in 'The Universe of Light', The Journal of Philosophy (4 Jan 1934), 31, No. 1, 15-21. (A “glowing” review was an accidental pun, I promise!) The excerpts above are found in that article, with more quotes from Bragg’s book.