George B. Brayton in 1872 proposed and built an engine that was very complete and fairly successful. Fig. 97 is a general view and Fig. 98 his oil burner. 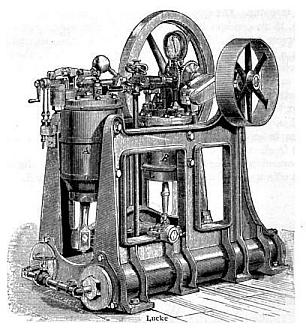 Air is compressed in the single-acting pump, which has a volume one-half that of the power cylinder. The compressed air passes from the constant-pressure receiver through pipe D and over the absorbent material e, through which the fuel is fed by a pump. Here it takes up vapor and the mixture passes the wire-guage grating and into the cylinder, where it burns. Means are provided to prevent entirely shutting off the air from the power cylinder, and thus there is kept constantly burning a small flame which increases for the power stroke. Governing is effected by a variable cut-off to the power cylinder.

The power cylinder is water-jacketed, and no trouble is experienced through over-heating. A safety valve is placed in the reservoir.