Our readers have already been made acquainted with one of the most gigantic enterprises of this or any other age, now in the act of being carried out in the city of London; we mean the leviathan iron steamship now being constructed under the superintendence of those distinguished engineers, Brunel and Scott Russell. But although the dimensions of this great vessel are somewhat generally known so far as figures are concerned, we cannot form so correct an idea of masses by these, as by comparing one mass with another. The accompanying diagrams, we present for this purpose. 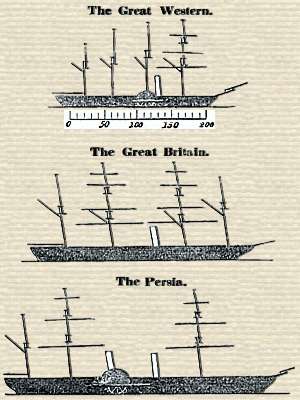 At a glance we can judge from these of its enormous dimensions. The Great Western was considered a large and noble steamer in its day; then the Great Britain was a world's wonder when it first floated on the deep; now it has been partly dwarfed by the Persia, whose gigantic proportions place her without a rival, at present, in navigating the ocean. But large though this ship is, and large though the others were, the accompanying figures show them, by comparison,—as it has been justly termed, “minnows by the side of a Triton.”

In an article in the London Quarterly Review, it is stated that the great ship was projected by Mr. Brunel—the father of “Transatlantic Steam Navigation,” and that it is building at Milwall, London, at the works of Scott Russell & Co, The material of the hull is the best iron plate, and the principle upon which these are combined together is novel. In length it is 700 feet, in breadth 60—nearly twelve times the length of its breadth. It has no ribs springing from the keel, and none of the ordinary ship framework. It has, how ever a system of ribs, or rather webbing, not transverse like the common ribs of ships, but longitudinal, running from stem to stern, up to eight feet above the water line;— these form thirty-two webs, subdivided into convenient lengths and covered inside with iron plates three-quarters of an inch thick, thus forming a double planking, or rather her frame-work forms a system of cells upon the same principle of construction as the Menai Tubular Bridge,—combining the strongest method of construction with the least weight of material.

Heretofore, iron ships have been built on the same principle as wooden ones, by lightening their sides gradually towards the deck. This faulty construction has led some of them to break in halves when run upon rocks and left suspended at the center of their keels. All the lines of a ship are curved. In wooden ships, the elasticity of the planking allows it to be easily modeled to the ribs; but not so with unyielding plates of iron an inch thick. Each plate receives the exact form for the place it is to occupy before it is placed in position. Each plate, therefore, formed the subject of separate study to the engineer, with the exception of some situated in the mid-ship section. For each plate, therefore, a model or pattern was required. The plates were first cut by huge shears, driven by a steam engine and the inclination or curve given to each by passing them through a system of adjustable rollers, and when completed each was numbered, like stones for an arch, to indicate the exact place it was to occupy in the ship. The plates of this vessel have been rivetted together like those of a steam boiler. It is divided into ten water-tight compartments, or bulk heads, 60 feet apart; also into a number of sub-compartments, and with a double top iron celular deck, and iron lower decks. By this multiplication of rectilinear apartments, this ship is made almost as strong as if it were made of solid iron, and yet in proportion to its size, it is rendered as light as a wooden ship; and it is so put together, that if it were broken into several parts, each would float and sustain itself.

The vessel is to be driven by two different kinds of propelling agents—paddle wheels and a screw,—the first combination of the kind placed on a steamer. Her paddle wheels, 56 feet in diameter, will be propelled by four engines, the cylinders of which are 6 feet 2 inches in diameter, and the stroke 14 feet. The motive power of these will be generated by four boilers. Enormous as are these engines having a nominal power of 1,000 horses, and standing nearly 50 feet high, they will be far inferior to those devoted to the screw. These will be supplied with steam by six boilers, working to a force of 1,600 horses—the real strength of the combined engines being equal to 3,000 horses nominally, but actually nearly twice that amount. The shaft of the screw is 160 feet long, weighs 60 tuns, and the screw is 24 feet in diameter. The calculated speed of the ship under steam is expected to average from fifteen to sixteen knots. Sails will not be much used except for keeping her steady, but in case of a strong fair wind arising, she is furnished with sails to run at a high speed. She is to have seven masts, two of which are square-rigged, and the whole spreading 6,500 square yards of canvas. It will be observed by the diagram that she carries no bowsprit, and has no sprit sail. This plan is borrowed from the Collins steamers to avoid top weight at the bow. Her whole crew is not to exceed 400 men. Steam sailors are to be employed in the form of four auxiliary small steam engines to do the heavy work, such as heaving the anchor, pumping, and hoisting sail.

It is obvious, that some special means must be adopted to direct this vast mass of moving iron as she flies on her course. The usual contrivances will not apply. No speaking trumpets, for instance, could make the captain heard either by the helmsman, or the look-out at the bow, more than three hundred feet away, and the engineer, would be beyond the reach of his voice. On ordinary occasions a semaphore will, in the day time, give the word to the helmsman, whilst at night and in foggy weather, he will be signalled how to steer by a system of colored lights. The electric telegraph is also to be employed to communicate the captain's orders to steersman, engineer and others.

If the wheels–56 feet in diameter—of this ship, make only 10 revolutions per minute, or 280 feet of piston velocity, which is not a high speed in these days, it will run at the rate of 18¼ miles per hour, allowing 11 per cent. for slip. If the Great Eastern makes such an average speed, she will cross the Atlantic—3000 miles—in six days and a half.

The saloons and apartments belonging to this ship will be most capacious—800 first class, 2000 second class, and 1200 third class passengers can be accommodated.

We almost tremble for the proper management of such a huge leviathan of the deep; but this is the age of great engineering enterprises, and Uncle John Bull is a fellow of wonderful capacity, courage, and determination. At the late half yearly meeting of the Company to whom she belongs, it was stated that it would be ready for launching about the 1st of September next, and she would make her first voyage to Portland, Me., and ply for some time between Liverpool and that port. Her first voyage will, therefore, be made to the “Great West,” instead of the “Great East,” as was first contemplated.