A. H. Reginald Buller
“To her friends said the Bright one in chatter” 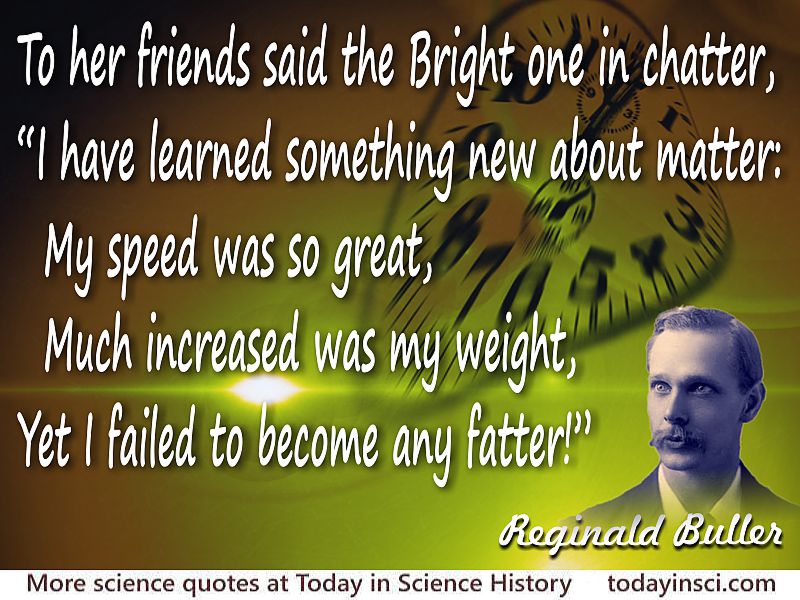 “To her friends said the Bright one in chatter,
‘I have learned something new about matter:
My speed was so great,
Much increased was my weight,
Yet I failed to become any fatter!’”

— A. H. Reginald Buller
The Lure of the Limerick: An Uninhibited History (1967)

This limerick plays on the variation of mass with velocity, as given by Albert Einstein’s special theory of relativity. It is a lesser known verse than another limerick penned by E.H. Reginald Bullard that was published in Punch magazine in 1923 under the title “Relativity”:

There was a young lady named Bright,
Whose speed was far faster than light;
She set out one day
In a relative way,
And returned on the previous night.

The better-known Relativity limerick has an interesting background, which is given here.


The limerick on the relativistic effects on weight can be found in the collection by Baring-Gould, The Lure of the Limerick: An Uninhibited History (1967), 6. As cited in John de Pillis, 777 Mathematical Conversation Starters, 277. (source)