from American Journal of Science (Nov 1861) 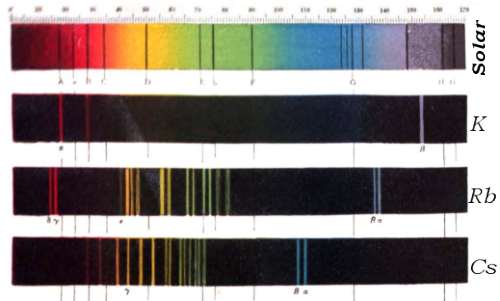 Comparison of spectra: solar, potassium, rubidium, caesium
from the drawings of Bunsen and Kirchoff (source) 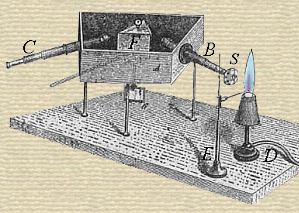 Diagram of the first apparatus used by Bunsen and Kirchhoff for spectral analysis. It was a provisional arrangement of two telescopes and a prism that could be rotated. The substance to be tested was placed on the tip of the wire extending from support E and heated with a Bunsen burner D. The light emitted passed through the slit S, the objective lens B, the Prism F, which created a spectrum viewed through the telescope C (source)

[p.409] Bunsen has communicated a preliminary notice of the two new metals discovered by Kirchhoff and himself by means of the spectral analysis. Both of these metals exhibit in their compounds an extraordinary resemblance to potassium, and cannot be distinguished from it either by reagents or by the blowpipe. The first of the new metals is named Rubidium from Rubidus, dark red, referring to two very remarkable spectral lines, which lie beyond Fraunhofer’s line A, [p.410] and consequently occur in a portion of the spectrum which can only be rendered visible by unusual methods. The authors have found the metal in the greatest quantity in the lepidolites; that of Rozena, in Moravia, contains about 2/1000 of its weight of oxyd of rubidium — the Saxon lepidolite appears to be still richer. Traces of it are found in almost all mineral waters, but it does not appear to be always present in the potash compounds of commerce. The compounds of Rubidium are most easily obtained pure from lepidolite. The rubidium is contained with small portions of Cæsium in the precipitate of chlorplatinate of potassium obtained from the mineral. The chlorplatinate of potassium requires nineteen times, the chlorplatinate of rubidium one hundred and fifty-eight times its weight of boiling water for solution. The precipitate is to be boiled repeatedly with very little water, and the solution each time simply poured off from the precipitate, which exhibits in the spectral apparatus, after a few boilings, two new blue lines which lie close to the blue calcium line, which the authors have not represented in their first plate of the spectrum, because it is one of the weaker lines; by further treatment with water, the two red lines beyond A, soon appear, together with several others which are less characteristic. The chlorid of rubidium is easily obtained from the precipitate by reduction with hydrogen and extraction with water. In this manner the authors obtain from 150 kilogrammes of lepidolite, about two ounces of nearly pure rubidium salt. By repeating the process of precipitation with chlorid of platinum and boiling several times, the last traces of potassium may be removed. To obtain rubidium free from cæsium, the salt must be converted into carbonate and repeatedly extracted with alcohol, which dissolves the carbonate of cæsium.

Rubidium forms with mercury, with the aid of the Voltaic circuit, an amalgam of silver-white color and crystalline structure. This amalgam quickly oxydizes in the air, decomposes water in the cold and is electropositive to potassium. The equivalent of rubidium is 85·36 and its symbol Rb.

The hydrate RbO, HO+aq is soluble in almost all proportions in water and alcohol; gives off its water of crystallization by heating, leaving RbO, HO which on farther heating, melts but does not lose its atom of water, is caustic like potash, dissolves in water with strong evolution of heat, and greedily attracts water and carbonic acid from the air.

The carbonate RbO, CO2 forms indistinct strongly alkaline crystals, insoluble in alcohol, and leaving on heating RbO, CO2+aq as a sandy powder, which melts easily, deliquesces and absorbs an additional atom of carbonic acid. The bi-carbonate RbO, CO2+HO, CO2 forms prismatic crystals permanent in the air, with a faint alkaline reaction, and a cooling, not caustic taste. The nitrate RbO, NO5 is not rhombic like saltpetre but crystallizes in dihexagonal prisms, with less distinctly formed twelve sided pyramids. The sulphate forms large hard anhydrous crystals, having a glassy lustre and permanent in the air: they are isomorphous with sulphate of potash. This sulphate gives with sulphate of alumina an alum crystallizing in hard glassy octahedra, and with sulphate of cobalt a beautiful double salt isomorphous with KO, SO3+CoO, SO3+6HO. The chlorid RbCl is anhydrous, permanent in air, crystallizing with difficulty in cubes, easily fusible, and readily and completely [p.411] volatile on the platinum wire. The chlorplatinate RbCl, PtCl2 is a bright yellow, anhydrous, sandy powder, consisting of microscopic regular octahedra, which can only be distinguished from the chlorplatinate of potassium by its lesser solubility. 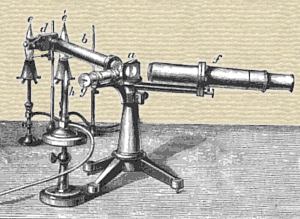 A later spectroscope used by Bunsen. Illustration from an article he published in 1861 describing its use. (source)

The second of the new elements, the authors term Cæsium, from Cæsius, sky blue; it gives a beautiful and highly characteristic spectral line, lying near the strontium-line Srδ. It appears to constantly accompany rubidium, but occurs for the most part in small quantity. Ten kilogrammes of the Dürkheimer water contain not quite two milligrammes of chlorid of cæsium. The authors obtained it from this water. The potassium, rubidium and cæsium are precipitated together by chlorid of platinum, and the double chlorids of potassium and rubidium, separated as much as possible by boiling with water; the cæsium may then be extracted by converting the mixed chlorids into carbonates, and dissolving out the carbonate of cæsium with absolute alcohol. To remove the last traces of potassium and rubidium, about 4/5ths of the carbonate are rendered caustic by baryta water, the mass evaporated in a silver dish, and the caustic oxyd of cæsium dissolved out with absolute alcohol, which leaves the carbonates of potassium and rubidium. This operation must be repeated till the spectral analysis exhibits at most a very faint reaction for potassium and rubidium.

The amalgam of cæsium decomposes water in the cold and oxydizes in the air: it is electro-positive to both potassium and rubidium, and is therefore the most electro-positive of all known elements. The equivalent of cæsium is 123·4 and its symbol Cs.

The hydrate CsO, HO+aq is indistinctly crystallized, deliquescent and extremely caustic; it loses an atom of water by ignition, evaporates completely when heated in the flame and is easily soluble in alcohol. The carbonate forms indistinct crystals, soluble in five times their weight of absolute alcohol, deliquescent and very caustic. The bicarbonate forms permanent, glassy prismatic crystals. The nitrate is anhydrous and isomorphous with nitrate of rubidium. The sulphate is also anhydrous and permanent in air; it forms a well crystallized alum and double sulphates isomorphous with KO, SO3+MgO, SO3+6HO. The chlorid crystallizes in cubes and is deliquescent in the air; it is slightly volatile and easily becomes somewhat basic, when heated in air. The chlorplatinate forms bright yellow microscopic regular octahedra, and is the least soluble of the three alkaline double chlorids.—Ann der Chemie und Pharmacie, cxix, 107.