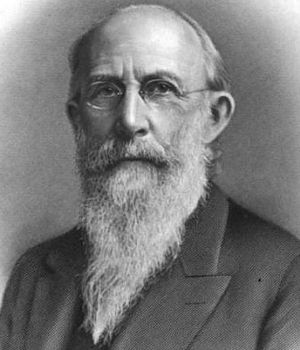 [p.300] EBENEZER BUTTERICK, inventor of the celebrated and useful “Butterick Patterns,” was born in Sterling, Worcester county, Massachusetts, May 29, 1826. He was the son of Francis and Ruhamah (Buss) Butterick, grandson of Jonathan and Hannah (Sawyer) Buttrick , great-grandson of Francis and Hannah (Gilson) Buttrick, great-great-grandson of John and Mary (Blood) Buttrick. The father of the last name John was a son of William and Sarah (Bateman) Buttrick, and grandson of William Buttrick, who was born in England in 1616, came to America from Kingston-on-Thames in 1635, and died in Concord, Massachusetts, June 30, 1698. Ebenezer Butterick’s father was a farmer and carpenter, an active and leading citizen, and the principal founder of a Universalist Society in Sterling, a proof of the intellectual courage which he never lacked, and which his son inherited and enlarged.

The son was educated in the common schools of Sterling and in Leicester Academy, an ancient and still flourishing school in Leicester, Massachusetts. The best business habits of his life he credited to his clerkship in his brother’s village store, the firm, Butterick and Bartlett. Still a youth, he began the business of tailoring as an apprentice in Worcester, Massachusetts. Careful application soon made him an expert and enabled him to establish himself as a merchant tailor of taste and skill in Sterling, Leominster, and finally in Fitchburg, Massachusetts. In 1850 he married Ellen Augusta Pollard, of his native town, who died in 1879, leaving a daughter, Mary Ellen Butterick, a son having died in infancy.

In the conduct of his business, Mr. Butterick was much annoyed by the waste of time in cutting children’s garments, and conceived the idea that a set of graded patterns would be a great advantage to him and other tailors, and especially to mothers making clothes for their own children. It was during a period of recuperation from disabling sickness and anxiety that his meditative mind conceived this idea. It was highly characteristic that a benevolent impulse and an interest in little children were fundamental to the invention which is now so intimately and honorably associated with his name. In June, 1863, he astonished his wife by telling her [p.301] that he was going to set about the making of patterns as a new business, and her deterrent caution did not avail to check his enthusiastic confidence that he was on the track of a useful and profitable invention. Having made convincing experiments in Sterling, he cut the first salable patterns on an extension table in the sitting room of his house, 41 Grove street. They were patterns for boys’ clothing, and the boy who furnished the first measurements was Clarence Butterick, a nephew of Mr E. Butterick, then four years old and now, as then, living in Sterling, Massachusetts. The first positive success was with the “Butterick Shirt Pattern,” but an equal success with patterns for boys’ and girls’ clothing soon followed. The first patterns were folded by members of the family, his own and his wife’s relatives. They were packed in boxes containing each one hundred patterns, and were sold at a wholesale price of $10 for each box; $25 retail. The first small purchases were made in Shirley, Massachusetts, and the purchasers of the first box were James Tuttle & Co., of South Acton. Mr. Butterick never spent the ten dollar bill which he personally got for this box of patterns, but kept it as an interesting reminder of the day of small things.

In September following the start in June, rooms were taken in a house near Mr. Butterick’s, and five girls and women were employed to do the folding under the direction of Mrs. Butterick’s sister. A Mr. Curtis, of Fitchburg, did the first printing, and Mr. A. L. Howard of Fitchburg was the first traveling salesman. Another salesman, John Roach, traveling through New Hampshire, Maine and Nova Scotia in the fall of 1863, was successful to a degree that was decidedly encouraging. A device for “trimmed patterns” answered a good purpose till the introduction of cuts and drawings on the pattern labels superseded it. In the spring of 1864, the work was taken to the old Academy building in Fitchburg, and during the same season Mr. Butterick issued his first fashion-plate, a small one. showing what he could do in the line of children’s garments. Later in the year he began publishing gentlemen’s fashion plates, accompanied by cut patterns, which did away with the labor of tracing and cutting out patterns from diagrams as had been previously necessary.

Some months in advance of these improvements, Mr. Butterick had introduced his patterns in New York. In or about October, 1863, he had taken two upper rooms at 192 Broadway. Almost literally he “took up his bed and walked,” for he brought a bedstead of his own invention from sterling for the back room where, using it by night, by day it could be folded against the wall. His inventive genius was always seeking and finding new avenues of expression. Shortly, Mr. Abner W. Pollard, later for for a long time a partner in the business, came to New York to assist Mr. Butterick, his brother-in-law, and he also lodged in the back room, which by day was store-room and work-shop, in the front room Mr. Butterick meeting his customers. Factory and home were removed to Brooklyn in 1865, December 7th, a day of national thanksgiving for the return of peace. The home gathered in seven persons who had assisted in the work in Fitchburg, while for the factory a second story in a dwelling house was at first sufficient room. From time to time a room was added, then a larger building was taken, and finally a commodious building on the corner of Throop and Lafayette avenues, which has until now (1904) been equal to the manufacturing requirements of the business. It was Mr. Butterick’s habit to go to the manufactory in its humble stage every morning before breakfast and sweep the rooms and make the fires, after breakfast going to the New York office. In 1867 Mr. Butterick associated with himself J. W. Wilder, his general agent, and A. W. Pollard, his secretary, in the firm of E. Butterick & Co., and the business throve apace until 1875 when particular circumstances conspired with the financial depression of the time to cripple it seriously. It soon rallied in response to the heroic efforts put forth by Mr. Butterick, his partners assisting to maintain an enterprise in which he had unfailing confidence and pride. The Butterick Publishing Company was organized in 1881. In the meantime subsidiary offices had been established in all important centres in this country and abroad, and the praise of the Butterick patterns was everywhere heard, especially as, since 1866, their most significant appeal has been to women, whose convenience and economy and taste they had preeminently served.

In 1883 Mr. Butterick’s health suffered a serious collapse. It rallied slowly, but never completely, during the remainder of his life, during which, still interested and influential in the conduct of the business, he lived in a quiet meditative fashion, spending nearly or quite half the year in the town where he was born, and where he made himself a commodious but simple home on a large farm, and endeared himself to all the neighborhood by his cordial friendliness. His participation in the business ceased in 1899, but never his interest in this creation of his mind and heart. Of his physical disabilities he made mental opportunities. His liberal means took nothing from the simplicity of his character and tastes. To gentle manners he united an inflexible will and sense of justice that was an immovable rock. Of a deeply religious nature, he cherished a most comfortable faith in the openness to each other of this life and the life beyond. He was formally associated with the Metropolitan Art Museum, the Brooklyn Institute of Arts and Sciences, the Brooklyn Guild, and the American Unitarian Association. In the welfare of poor children he had special interest, and a generous appreciation of their needs. No man was ever less injured by good fortune or less convinced that mere money-getting is the chief end of life. After a short illness, he died March 31, 1903, and was buried in Leominster, Massachusetts, a town adjoining the pleasant town where he was born.