from Dictionary of National Biography (1901) 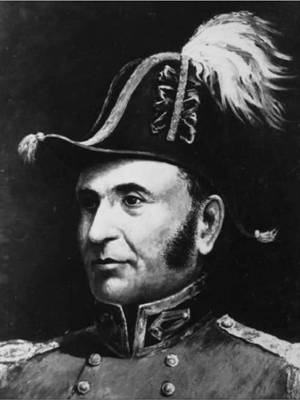 Colonel John By, Royal Engineers; 1830
as imagined by an artist (known only as C.K.) showing the Colonel as a military man, but without authenticity. (source)

[p.363] John By (1781-1836), lieutenant-colonel royal engineers, founder of Bytown, now Ottawa, Canada, and engineer of the Rideau canal, was born in 1781. After passing through the Royal Military Academy at Woolwich, he received a commission as second lieutenant in the royal artillery on 1 Aug. 1801, but was transferred to the royal engineers on 20 Dec. following. His further commissions were dated: lieutenant 18 April 1801, second captain 2 March, first captain 24 June 1809, brevet major 23 June 1814, lieutenant-colonel 2 Dec 1824. After serving at Woolwich and Plymouth he went in August 1802 to Canada, where he remained for nearly nine years. ...* In January 1811 he went to Portugal and served in the peninsular war, taking part in the first and second sieges of Badajos in May and June of that year.

By was recalled from the peninsula to take charge of the works at the royal gunpowder mills at Faversham, Purfleet, and Waltham Abbey, a post he occupied with great credit from January 1812 until August 1812, when, owing to the reductions made in the establishments of the army, he was placed on the unemployed list. While employed in the powder mills he designed a bridge on the truss principle for a span of one thousand feet, and constructed a model of it which is in the possession of the royal engineers at Chatham. A description of the bridge appeared in the “Morning Chronicle” of 14 Feb. 1816.

In April 1826 By went to Canada, having been selected to carry out a military water communication, free from obstruction and safe from attack by the United States between the tidal waters of the St. Lawrence and the great lakes of Canada. “If ever man deserved to be immortalised in this utilitarian age,” says Sir Richard Bonnycastle in “The Canadas in 1841,” “it was Colonel John By.” In an unexplored part of the country, where the only mode of progress was the frail Indian canoe, with a department to be organised, workmen to be instructed, and many difficulties to be over come, he constructed a remarkable work - the Rideau canal. On his arrival in Canada, he surveyed the inland route up to the Ottawa river to the Rideau effluent, and thence by the Rideau lake and Catariqui river to Kingston on Lake Ontario. He chose for his headquarters a position near the mouth of the proposed canal, a little below the beautiful Chaudière falls of the Ottawa river, whence the canal was to ascend eighty-two feet by a succession of eight locks through a chasm. Here he built himself a house in the bush, there being at that time only two or three log huts at Nepean point. A town soon sprang up, and was named after him Bytown.

In May 1827, the survey plans and estimates having been approved by the home government, by whom the cost was to be defrayed, By was directed to push forward the work as rapidly as possible, without waiting for the usual annual appropriations of money. Two companies of sappers and miners were placed at his disposal, a regular staff for the works were organised, barracks and a hospital were commenced to be built in stone, and the foundation stone of the canal was laid by Sir John Franklin. The canal was opened in the spring of 1832, when the steamer Pumper passed through from Bytown to Kingston. The length of the navigation is 126¼ miles, with forty-seven locks and a total lockage of 446¼ feet. The work proved to be much more expensive than had been anticipated; for although stone, sand, and puddling clay were near at hand, the excavations had to be made in a soil full of springs interspersed with masses of erratic rock. In 1828, the attention of the British parliament was called to the expenditure, By having recommended that additional money be granted to increase the size of the locks and build them in stone instead of wood. Colonels Edward Fanshawe and Griffith George Lewis of the royal engineers, were sent as commissioners from England to report on the subject, and adopted By's views. Kingsford, in his “History of Canada,” says, “We should never forget the debt we owe to Colonel By for the stand he made on this occasion.”

[p.364] Bytown sprang quickly into an important place, and became the centre of a vast lumber trade. After the union of the Upper and Lower Canada, its name was changed to Ottawa; in august 1858 it became the capital of the united provinces, and in 1867 of the dominion of Canada. The cost of the Rideau canal—about a million—was so much above the original estimate that a select committee of the House of Commons, with John Nicholas Fazakerley, M.P. for Peterborough, as chairman, was appointed to inquire into the matter, He was recalled, and arrived in England in November 1832. He was examined by the committee, who, while admitting that the works had been carried out with care and economy, concluded their report with a strong expression of regret over the estimate and the parliamentary votes. By, who had expected commendation on the completion of this magnificent work in so short a time, under so many difficulties, and at a cost by no means extravagant, felt himself dreadfully ill-used and never recovered from the disappointment. His health failing, he was placed on the unemployed list, and died at his residence, Shernfold Park, near Frant, Sussex, on 1 Feb 1836.

[* The ellipsis in the first paragraph removes some out-dated and incorrect information. It originally read: “He constructed a fine model, now at Chatham, of the fortress of Quebec, including the confluence of the rivers St. Charles and St. Lawrence, and the site of the battle won by Wolfe on the plains of Abraham.” Modern accounts do not refer to the model residing at “Chatham,” in the period leading up to the year 1901, which was “now” when the above was published. It was probably by then at the Woolwich Royal Arsenal.

Most significantly, John By did not build the model himself. He supervised and assisted Jean-Baptiste Duberger, who did the major work on it. The century-old biography reflects an incorrect version of history. John By had, in fact, taken much more than his fair share of, and effectively usurped, all the credit for building the model. After Duberger's death, over the years a number of writers have given Duberger the recognition denied him in his lifetime. A modern biography explaining this is in the article on Jean-Baptiste Duberger in the Dictionary of Canadian Biography. The model was probably prepared for military purposes, for it was sent to London. Since then, it has been returned for permanent display in Canada. The description as a “fine model” rather understates its historic value for showing the era of major military fortifications construction in Québec city. It was built at 1:300 scale, and originally measured approximately 6 x 10 meters (about 20 x 30 feet). For a photo that gives a good impression of the extensive model, see Fortifications of Québec National Historic Site.—Webmaster, with the helpful links and update information, and with thanks to, a knowledgable reader's feedback.]

The picture is of an undated work that is is regarded as not an authentic likeness, merely an idealized image. The only known image believed to be authentic is a silhouette showing a portly build. Further information on the above image, and other representations of John By, is at this site. Text from: Sidney Lee (ed.) Dictionary of National Biography (1901), Supplement Vol. 1, 363-364. (source)