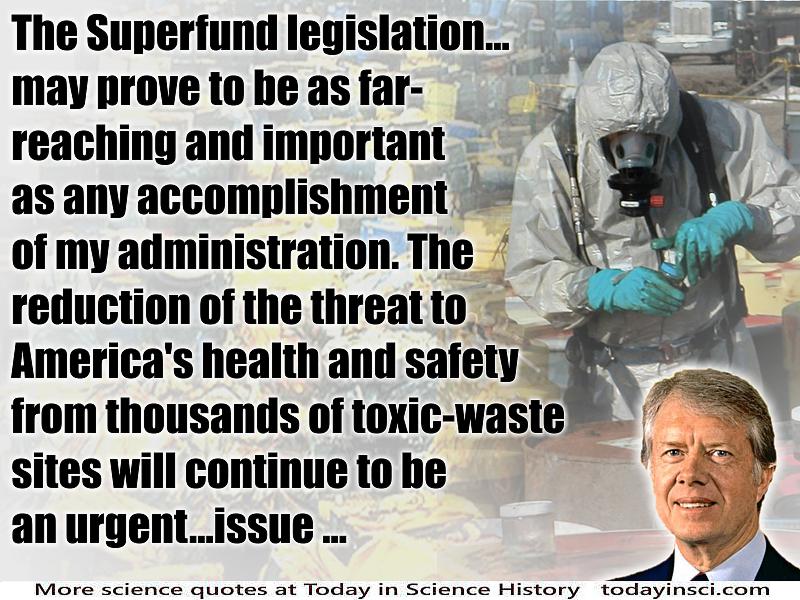 “The Superfund legislation... may prove to be as far-reaching and important as any accomplishment of my administration. The reduction of the threat to America's health and safety from thousands of toxic-waste sites will continue to be an urgent…issue…”
— U.S. President Jimmy Carter
Keeping Faith (1980) 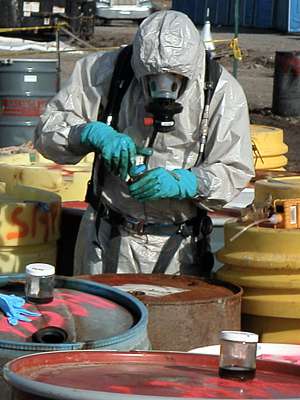 On 7 Aug 1978, President Carter approved Federal emergency financial aid to the residents of the Love Canal neighborhood in the city of Niagara Falls, New York. Their homes bordered an old canal that from 1947 to 1952 been used as a landfill for hazardous waste by the Hooker Chemicals and Plastics Corporation. That was leaching out, into the area homes, and the chemicals endangered the health of the residents. They had experienced high rates of birth defects and miscarriages, and in their basement air, samples showed chemical levels up to 5,000 times higher than what was considered safe. Polluted water pooled on the surface of the landfill. Pets died. Children burned their feet.

Then came the questions about who would foot the bill for the Love Canal clean-up. The contamination had produced a disaster area for which there was no precedent in Federal law. Meanwhile, 239 families had to be evacuated, and their homes were to be purchased at a cost of twelve million dollars. More families would need to be evacuated on later evidence of harm.

On 13 Jun 1979, President Carter asked Congress for legislation that would establish a $1.6 billion fund to enable the Government to respond to the Love Canal and similar hazards, and that the financial burden should fall on those chiefly responsible for generating toxic materials. Special legislation was enacted that became known as the Superfund, and on 11 Dec 1980, shortly before he left office, President Carter approved the Superfund to control toxic wastes at the Love Canal site, and others that had come to light.

In one of his books1, Jimmy Carter wrote that “The lame-duck legislative session was remarkably productive. … Action was completed on all but one of the energy bills, on a landmark act establishing a “Superfund” to help ameliorate the blight of toxic-waste sites, and—finally—on the Alaska lands bill for which I had waited so long.

The Superfund legislation set up a system of insurance premiums collected from the chemical industry to clean up toxic wastes. This new program may prove to be as far-reaching and important as any accomplishment of my administration. The reduction of the threat to America's health and safety from thousands of toxic-waste sites will continue to be an urgent but bitterly fought issue-another example for the conflict between the public welfare and the profits of a few private despoilers of our nation's environment.”

In the following decades, the Superfund that President Carter had set in motion cleaned up hundreds of toxic waste sites across the nation, but hundreds more are known and remain on a priority list for action.

By 2002, when Republican George W. Bush was president, Time magazine printed an article headlined, “Superfund Gets the Super Shaft.” It stated his dramatic shift in business-friendly policies “may prove to be something of an amnesty for many corporations penalized under the Superfund sites,” and how, “over the past few years, the burden of Superfund expenses slowly shifted away from corporations and over to taxpayers,” as the “Bush administration wants to rewrite that policy to save corporations up to $1 billion per year in taxes.”2