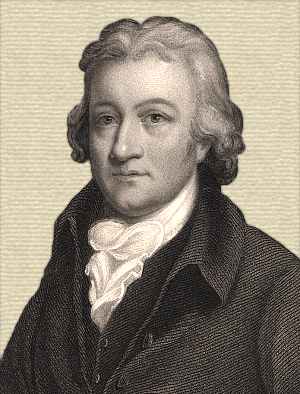 Edmund Cartwright
engraving by James Thomson (1789-1850) after a painting by Robert Fulton. (source)

[p.234] Among the names of those eminent inventors who have given to the useful arts and to manufactures their present importance— who have in the most direct and perceptible way benefited the civilization of the world—the name of Edmund Cartwright, the inventor of the power-loom, deserves to be borne in warm and grateful remembrance. Although not strictly a self-made man, he owes his reputation entirely to himself, and as he obtained this at an advanced period of life, his story furnishes the instructive lesson that it is never too late to exert the highest faculties of the mind, even when they have been occupied in utterly different pursuits to those to which they are now newly called.

Edmund Cartwright was born in the year 1743, at Marnham, in the county of Nottingham, England. His family was ancient and respectable, although in somewhat reduced circumstances. Being intended for the Church, Edmund had more than ordinary care bestowed on his education. After leaving the school at Wakefield, he was sent to University College, Oxford, and subsequently was elected a fellow of Magdalen College. When the time arrived for taking holy orders, he was appointed to the living of Brampton, near Chesterfield, and afterward of Goadby-Marwood in Leicestershire. At an early age he displayed some literary ability, and published, anonymously, a collection of poetical pieces. In 1770 he published, in his own name, a legendary poem entitled “Armida and Elvira,” which was received with much favor, and passed through several editions in a short time. He wrote, also, the “Prince of Peace,” and sonnets to “Eminent Men.” After this he became a regular contributor to the “Monthly Review,” and a literary correspondent with many eminent persons.

In these congenial and tranquil callings Cartwright’s life passed away peacefully and profitably until his fortieth year. Happening to be at Matlock in the summer of 1784, he fell in company with some Manchester gentlemen, whose conversation was destined to change the whole tenor of his life. They talked of [p.235] manufacturing, and especially of Arkwright’s spinning machinery. One of the company observed that, as soon as Arkwright’s patent expired, so many mills would be erected, and so much cotton spun, that hands would never be found to weave it. To this the listener replied that Arkwright must then set his wits to work to invent a weaving-mill. This led to a conversation on the subject, in which the Manchester gentlemen unanimously agreed that the thing was impracticable, and in defense of their opinion they adduced arguments which Cartwright was certainly incompetent to answer, or even to comprehend, being totally ignorant of the subject, having never, at the time, seen a person weave. He controverted, however, the impracticability of the thing by remarking that there had been lately exhibited in London an automaton figure which played at chess. “Now you will not assert, gentlemen,” said Cartwright, “that it is more difficult to construct a machine that shall weave, than one that shall make all the variety of moves that are required in that complicated game.” Some time afterward, a particular conversation recalled this conversation to his mind. It struck him that, as in plain weaving, according to the conception he then had of the business, there could only be three movements, which were to follow each other in succession, there could be little difficulty in producing and repeating them. Full of these ideas, he immediately employed a carpenter and smith to carry them into effect. As soon as the rough model was finished, he got a weaver to put in the warp, which was of such materials as sailcloth is usually made of. To his great delight, a piece of rough cloth was the result. His delight was unbounded, for it proved that his theory was correct. As he had never before turned his thoughts to mechanism, either in theory or practice, nor had seen a loom at work, nor knew any thing of its construction, it will be readily supposed that his machine was a rough one. The warp was laid perpendicularly, the reed fell with a force of at least half a hundred weight, and the springs which threw the shuttle were strong enough to have thrown a Congreve rocket. It required the strength of two powerful men to work the machine at a slow rate and only for a short time. “Conceiving, in my simplicity,” says Cartwright, “ that I had accomplished all that was required, I then secured what I thought a most valuable property by a patent, dated 4th of April, 1785. This being done, I then condescended to see how other people [p.236] wove, and you will guess my astonishment when I compared their easy modes of operation with mine. Availing myself, however, of what I then saw, I made a loom, in its general principles nearly as they are now made; but it was not till the year 1787 that I completed my invention, when I took out my last weaving patent, August the 1st of that year.” Mr. Cartwright made an improvement in this loom subsequently, by which patterns in checks could be executed with beautiful precision.

Notwithstanding the obvious advantages of Mr. Cartwright’s machinery, there was great difficulty in introducing it, mainly owing to the opposition of the laboring classes, who imagined that their simple lives would be ground out by the iron monster. A factory was erected at Doncaster by some of Cartwright’s friends, in which he had an interest, but it was unsuccessful. Another establishment, fitted up with five hundred looms on the new principle, was set upon by an exasperated mob and utterly destroyed. The inventors of labor-saving machines have always these massive difficulties to deal with and to overcome. In Cartwright’s case it took some years, but he lived to see his machines in full favor, and to know that they performed the labor of two hundred thousand men.

Cartwright’s next invention was to comb wool by machinery. Here, again, he was met by popular opposition, and not only this, but by fraudulent attempts to evade his rights. The machines, however, triumphed, and came into general use. Dr. Cartwright now exercised his ingenuity in a variety of ways, giving himself up entirely to the pleasant excitement of invention. He took out more patents, and received several premiums from the Society for the Encouragement of Arts and the Board of Agriculture. The steam-engine engaged much attention, and he used to tell his son (how prophetically time has proved) that, if he lived to be a man, he would see both ships and land-carriages impelled by steam. “It is also certain,” says Mr. Craik, “that at that early period he had constructed a model of a steam-engine attached to a barge, which he explained, about the year 1793, in the presence of his family, to Robert Fulton, then a student of painting under West. Later in life, Cartwright engaged himself in the construction of a steam-carriage to run on common roads, but death prevented the completion of his plans. This event took place in October, 1823. He continued his mechanical and philosophical experiments up to [p.237] the last with unabated vigor, and enjoyed excellent health, mental and physical. On the anniversary of his 77th year, he wrote to his brother, “I this day entered into my 77th year in as good health and spirits, thank God, as I have done on any one birthday for the last half century. I am moving about my farm from eight o’clock in the morning till four in the afternoon, without suffering the least fatigue.”

Some curious things are related of Cartwright, which tend to prove that he was a very absorbed or a very forgetful man. He would sometimes lose all memory of his own inventions and other productions of an early date, even when his attention was particularly called to them. On one occasion a daughter repeated some lines from a poem. “They are beautiful, child; where did you meet with them!” he asked; and it was with the greatest astonishment he heard they were from his own poem of the “Prince of Peace.” At another time, being shown the model of a machine, he examined it with great attention, and at last observed that the inventor must have been a man of great ingenuity, and that he himself should feel very proud if he had been the author of the contrivance; nor could he be immediately convinced that such was actually the fact. We give these anecdotes for what they are worth, merely remarking that they are curious.

Defective specifications, loose patents, and greedy imitators all combined to rob Cartwright of the just reward of his ingenuity. From his power-loom—the most important of all his inventions —he received little or nothing in the way of remuneration, certainly nothing to compensate him for the loss he sustained at the fire where five hundred of these machines were destroyed. After the expiration of the patent, however, a number of manufacturers and merchants, who recognized his claim to the invention, presented a memorial to the Lords of the Treasury setting forth the merits of his improvements, and begging that the national bounty might be bestowed upon him. In consequence of this and other applications in his favor, the sum of fifty thousand dollars was soon after granted to him by Parliament, “in consideration of the good service he had rendered the public by his invention of weaving.” This sum, large as it appears, was smaller than he had expended on his products, but it enabled him to pass the remainder of his life in comfortable retirement, and in a manner suited to his tastes and education. He was eighty-one years of age at the time of his death.