Charles-Augustin Coulomb
“The Sciences are monuments” 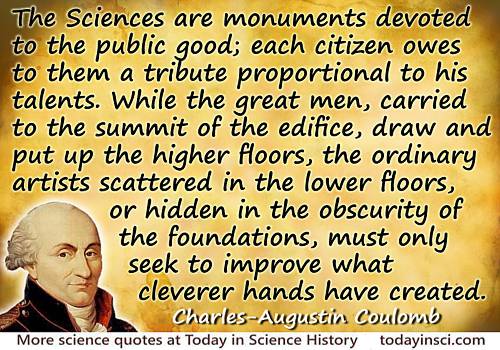 “The Sciences are monuments devoted to the public good; each citizen owes to them a tribute proportional to his talents.”
— Charles-Augustin Coulomb
Mémoires présentés par divers Savants à l'Académie des Sciences (1778)

This quote was written early in Coulomb's career, when he was a civil engineer. Hence the metaphor of a building is very apt. Charles-Augustin Coulomb is now remembered for his pioneering researches on electricity (for which the SI unit of charge has been named after him) that he undertook later in life. However, as a young graduate of the École du Corps Royale du Génie, he was qualified to act as the engineering officer assigned to Martinique (Feb 1764 to Jun 1772).

During the eight years he spent at Martinique, his duties included designing defensive fortifications on the island to protect it against possible attacks by the English Navy. For the construction designs, he had to work on the four “classic” eighteenth-century problems of civil engineering: the strength of columns and beams, the thrust of soil, and the thrust of arches. He wrote a book-length Mémoire1 of his solutions to these problems, which he read to the Académie Royale des Sciences on 10 Mar 1773 and 2 Apr 1773, the year after he had returned to France. It was published in 1776.

The most notable section of this book deals with the mathematical analysis of the problem of the thrust of soil. This was such a fundamental advance over any previous effort by others, that he is regarded as the father of soil mechanics.

“The Sciences are monuments devoted to the public good; each citizen owes to them a tribute proportional to his talents. While the great men, carried to the summit of the edifice, draw and put up the higher floors, the ordinary artists scattered in the lower floors, or hidden in the obscurity of the foundations, must only seek to improve what cleverer hands have created.”

In his book on Structural Analysis,2 Jacques Heyman restates this part of Coulomb’s introduction..Quoting in Heyman’s words, Coulomb hoped that “the Académie will find his small contribution to the monument of learning to be useful; the grand design is in the hands of great men, but lesser workers, hidden in the darkness of the foundations, may also perhaps be of help.”


Text by Webmaster with biographical information and original French quote from Heymans books. English translation of subject quote from Ivor Grattan-Guinness, Convolutions in French Mathematics, 1800-1840: From the Calculus and Mechanics to Mathematical Analysis and Mathematical Physics (1990), Vol. 1, 533. (source)