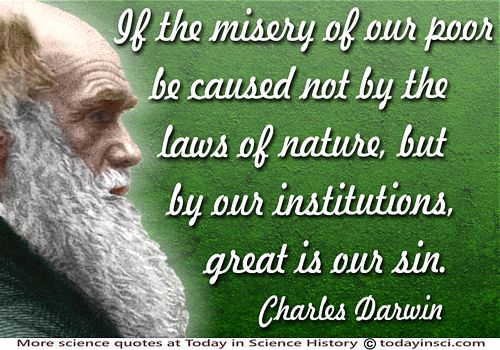 “If the misery of our poor be caused not by the laws of nature, but by our institutions, great is our sin.”
— Charles Darwin
In Journal of Researches (19 Aug 1836). 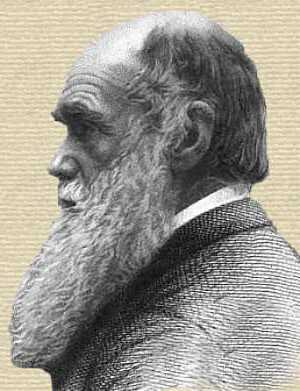 When this web page writer began looking up the context of this quote, his breath was taken away. Darwin was a young man, age 27, from a privileged life in the Kent countryside, when visiting the harbour town of Pernambuco in the northeast of Brazil, he was reminded again of the inhumanity of slavery he had already seen in Rio de Janeiro. The quote above is mild; the context is, in Darwin's words, “heart-sickening.” How he expressed his revulsion is recorded in the book of his Journal of Researches. The British public also more widely learned of it from an excerpt published in Chambers's Edinburgh Journal on 18 Oct 1845:

“On the 19th of August 1836,” says Darwin in his journal of a voyage round the world, “we finally left the shores of Brazil.

I thank God I shall never again visit a slave country. To this day, if I hear a distant scream, it recalls with painful vividness my feelings

when, passing a house near Pernambuco, I heard the most pitiable moans, and could not but suspect that some poor slave was being tortured, yet knew that I was as powerless as a child even to remonstrate. I suspected that these moans were from a tortured slave, for I was told that this was the case in another instance. Near Rio de Janeiro I lived opposite to

an old lady, who kept screws to crush the fingers of her female slaves. I have stayed in a house where a young household mulatto daily and hourly was reviled, beaten, and persecuted enough to break the spirit of the lowest animal. I have seen a little boy, six or seven years old, struck thrice with a horse-whip (before I could interfere) on the head [for having handed me a glass of water not quite clean]; I saw his father tremble at a mere glance from his master's eye.

These latter cruelties were witnessed by me in a Spanish colony, in which it has always been said that slaves are better treated than by the Portuguese, English, or other European nations. I have seen at Rio de Janeiro a powerful negro afraid to ward off a blow directed, as he thought, at his face. I was present when a kind-hearted man was on the point of separating for ever the men, women, and little children of a large number of families who had long lived together. I will not even allude to the many heart-sickening atrocities which I authentically heard of; nor would I have mentioned the above revolting details, had I not met with several people, so blinded by the constitutional gaiety of the negro, as to speak of slavery as a tolerable evil. Such people have generally visited at the houses of the upper classes where the domestic slaves are commonly well treated; and they have not, like myself, lived amongst the lower classes. Such inquirers will ask slaves about their condition; they forget that the slave must indeed be dull who does not calculate on the chance of his answer reaching his master's ears.

It is argued that self-interest will prevent excessive cruelty; as if self-interest protected our domestic animals, which are far less likely than degraded slaves to stir up the rage of their savage masters. It is an argument long since protested against with noble feeling, and strikingly exemplified by the ever illustrious Humboldt. It is often attempted to palliate slavery by comparing the state of slaves with our poorer countrymen: if the misery of our poor be caused not by the laws of nature, but by our institutions, great is our sin; but how this bears on slavery I cannot see. As well might the use of the thumb-screw be defended in one land, by showing that men in another land suffered from some dreadful disease. Those who look tenderly at the slave owner, and with a cold heart at the slave, never seem to put themselves into the position of the latter—what a cheerless prospect, with not even a hope of change! Picture to yourself the chance, ever hanging over you, of your wife and your little children— those objects which nature urges even the slave to call his own—being torn from you, and being sold like beasts to the highest bidder!

And these deeds are done and palliated by men who profess to love their neighbours as themselves, who believe in God, and pray that his will be done on earth! It makes one's blood boil, yet tremble, to think that we Englishmen and our American descendants, with their boastful cry of liberty, have been and are so guilty; but it is a consolation to reflect that we at least have made a greater sacrifice than was ever made by any nation to expiate our sin.”

When stated outside of the above context, “If the misery of our poor be caused not by the laws of nature, but by our institutions, great is our sin,” remains eloquent. Yet, it is still a timely condemnation of the society of surging inequality in the U.S. The first step to formally ending slavery in America was taken with the Emancipation Proclamation on 1 Jan 1863. A century and a half later, though, the burden of poverty still remains rife for too many, as the minimum hourly pay does not provide a living wage, a state of affairs brought about by the country's institutions. That reverberates in countries around the world, as the wealthy Walmart owners, among others, chase the lowest labour costs, to line their own pockets. Thus, Darwin's closing paragraph above remains true, and the present sins so sadly still cast a long shadow. Yes, it makes the web page writer's “blood boil.”

If the creationists and their ilk would cease spending their time and treasure challenging the scientific interpretation of evolution, and instead turn their religious fervour to seeing the “misery of our poor,” they could learn something invaluable from Darwin, after all. And their God would surely be more pleased with them.

Paragraph breaks have been added for readability. Text from William Chambers and Robert Chambers (eds.), Chambers's Edinburgh Journal (18 Oct 1845), 4, 256. The magazine printed the excerpt as one paragraph. Bracketed phrase added by comparison with Charles Darwin, Journal of Researches into the Natural History and Geology of the Countries Visited During the Voyage of H.M.S. Beagle Round the World (1839, 1887), 499-500. (source)