Phineas Davis and the York Locomotive

From History of Baltimore City and County (1881) 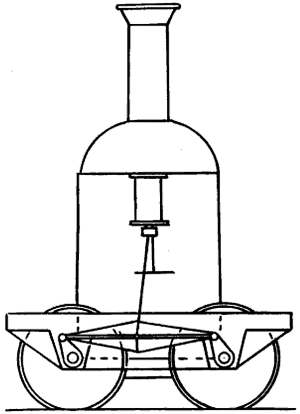 [p.322] An advertisement published by the company [Baltimore and Ohio Railraoad] Jan. 4, 1831, offering a premium for two locomotives which should come up to the specifications therein set forth, is somewhat remarkable, for the reason that it shows a very thorough knowledge of what a railroad engine ought to be, although the motor which the president describes had not yet taken form and shape. The object of the advertisement was to submit to the ingenious mechanics of the country certain ascertained facts and principles, to the end that they might be applied to the construction of an effective locomotive. Such was the faith of the company in the utility of the inventions of Mr. Knight and Mr. Winans that it was expressly stipulated they should be embodied in the competing locomotives. The experience of fifty years has shown that the company did not claim too much for these improvements. The sum of four thousand dollars (the premium being included in the price) was to be paid for the locomotive, constructed in accordance with these specifications, which should be deemed the best after thirty days' actual use, and three thousand five hundred dollars for the second best. Three locomotives were constructed in pursuance of this advertisement, and the tests to which they were subjected and the exhibitions given of their working capacity constitute a most interesting chapter in the history of the Baltimore and Ohio Railroad. The company extended the time named in the advertisement for testing the engines (June 1, 1831) to June 27th, and in point of fact the trial did not come off till July 12th. Only two competitors put in an appearance at the first trial, the “York,” manufactured by Davis & Gartner, at York, Pa., and an engine from New York City, the name of which is not recorded in the local chronicles. Another engine, built at Gettysburg, Pa., by George Welsh, had been entered for the prize, but it was not ready to take the track on the day finally set for the contest. At this exhibition the “York” won all the honors. On the first trip it made a mile in three minutes, drawing a car containing forty persons, and rounded the curves without checking speed. Several trips were made, and the engine ran a mile in two minutes and a half on some portions of the road. After the Davis engine had astonished the assembled multitude with its splendid performance, the New York engine made a short trip, but it fell so far behind its competitor in the essential quality of speed that not much notice was taken of its merits, whatever they may have been. The “York” was kept on the road until it was worn out; the builder, Phineas Davis, was made chief constructor of engines for the company, and remained in its service until he was accidentally killed while taking his employés on an excursion to Washington, on Sept. 27, 1835. Four of [p.323] the engines built by Mr. Davis after the model of the “York” are still in daily use at the Mount Clare depot as “ regulators” for making up trains and pushing cars about from one yard to another.

[p.322 footnote] Phineas Davis was a self-taught man, and like all eminent men of his class in science and art, he was capable of achieving the most decisive results. Mr. Davis was a native of New Hampshire, and early in life migrated to York, Pa., where he arrived poor, friendless, and unknown. He began the watch-making business in York with an estimable citizen, and soon met with great success. After continuing in business for several years he turned his attention to chemistry, but soon applied himself to steam and the construction of steam-engines, in which he look great delight. In connection with his partner, Mr. Gartner, he built several engines for various purposes, and made many improvements to illustrate their power and capacity for work. The first efficient locomotive engine used upon the Baltimore and Ohio Railroad was constructed by Davis A Gartner, under his direction, at York, and brought to Baltimore upon wagons. From this period up to the time of his death a large number of locomotives were built for this great work under his immediate superintendence, and scarcely any one ever succeeded another without evincing some improvement in design or execution. The construction of locomotives was particularly suited to his taste and capacity, and the Baltimore and Ohio Railroad Company very soon discovered his value in that department and offered him such facilities as induced him to leave the concern at York in the care of his partner and engage in making engines in Baltimore at the company's shops. He had been so engaged for a couple of years, and by his talents, industry, and perseverance, under the liberal encouragement of the company, he had by successive improvements brought the locomotive to a high degree of perfection. He was on a trial-trip with his latest-improved engine when he met his death. Upon the [p.323 footnote] return of the train from Washington he rode on the tender to watch the movements of the engine, and while thus engaged it ran off the track, which brought the cars in the rear with great force upon the tender, instantly killing its only occupant. His body was brought to Baltimore and interred in the Friends' burying-ground at the corner of Aisquith and Fayette Streets. He left two orphan children, his wife having died a short time before.

The first succcessful locomotive engine after the “York” on the Baltimore and Ohio Railroad was also built by Messrs. Davis & Gartner, and called the “Atlantic.” The experimental trial of this engine took place on Aug. 6, 1832, and was highly successful. It was the first engine that completely succeeded in burning anthracite coal. A trip of eighty miles per day was performed with a consumption of one ton of coal. From this time forward steam-power was generally used on the road.

Text from John Thomas Scharf, History of Baltimore City and County, From the Earliest Period to the Present Day (1881), 322-323 (source) .Image from Joseph Snowden Bell, The Early Motive Power Of The Baltimore And Ohio Railroad (1912), 17. (source) .