from Hard Times (1854)
by Charles Dickens 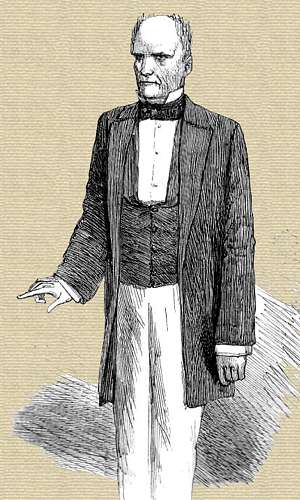 In such terms, Mr. Gradgrind always mentally introduced himself, whether to his private circle of acquaintance, or to the public in general. In such terms, no doubt, substituting the words “boys and girls” for “sir,” Thomas Gradgrind now presented Thomas Gradgrind to the little pitchers before him, who were to be filled so full of facts.

Indeed, as he eagerly sparkled at them from the cellarage before mentioned, he seemed a kind of cannon loaded to the muzzle with facts, and prepared to blow them clean out of the regions of childhood at one discharge. He seemed a galvanising apparatus, too, charged with a grim mechanical substitute for the tender young imaginations that were to be stormed away.