Arthur Conan Doyle
“No need for fiction in medicine” 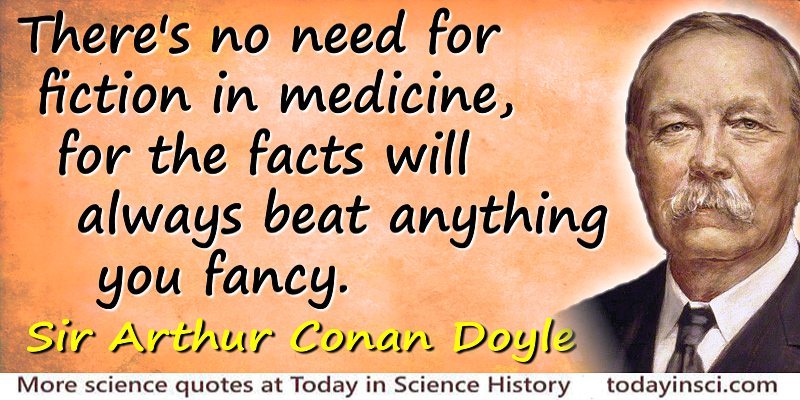 “There’s no need for fiction in medicine, for the facts will always beat anything you fancy.”
— Arthur Conan Doyle
From Round the Red Lamp: Being Facts and Fancies of Medical Life (1894).

This quotes comes from Arthur Conan Doyle’s fiction book, Round the Red Lamp, which is a collection of short stories featuring the problems encountered by physicians and surgeons in their work. In fact, because of his education in medicine before he took to writing full-time, leaving Sherlock Holmes aside, Conan Doyle can easily spin yarns about medical life.

In his story called 'A Medical Document', three medical people are talking to each other. One, a general practioner named Foster, comes up with this line of thought, which begins:

“There’s no need for fiction in medicine … for the facts always beat anything you can fancy.”

“But it has seemed to me sometimes that a curious paper might be read at some of these meetings about the uses of medicine in popular fiction … what diseases are made most use of in novels. Some are worn to pieces, and others, which are equally common in real life, are never mentioned. Typhoid is fairly frequent, but scarlet fever is unknown. … Then there is the mysterious malady called brain fever, which always attacks the heroine after a crisis, but which is unknown under that name to the text books. … The small complaints simply don’t exist. Nobody ever gets shingles or quinsy, or mumps in a novel. All the diseases, too, belong to the upper part of the body. The novelist never strikes below the belt.”