Anticipations of the Motor Car. 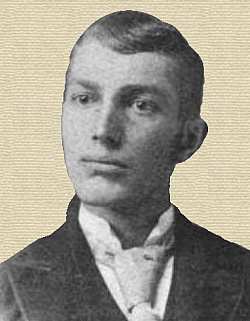 [p.1] Anticipations of the Automobile.—The self-propelled vehicle conception is older than history. Homer tells us (Iliad, 18th Book) that Vulcan in one day framed “full twenty tripods that on wheels of gold, instinct with spirit, rolled from place to place, self-moved, obedient to the beck of the gods.” A closer prediction of a modern motor tricycle could hardly have been written. Nearly three centuries ago a German proposed to drive vehicles 2,000 paces an hour by means of springs. In 1645, Patin wrote “An Englishman claims he can build vehicles that will run from Paris to Fountainbleau in one day without horses by means of admirable springs. The vehicle which is now being built will save much hay and oats, if successful.” This shows economy to have been a leading thought even then. In 1759, an English doctor called Watt's attention to the possibilities of steam vehicles, but Watt did not enthuse. In 1763, Nicholas Cugnot, a French captain, designed a steam vehicle, and in 1769, assisted by the French War Department, built a three-wheeled gun carriage which was operative. In 1797, he also built and operated a four-passenger tricycle capable of four miles per hour.

Early Experimenters in Motor Vehicles.—In 1786, Oliver Evans secured a patent from the Maryland legislature, and in 1804 built, at Philadelphia, a combination steam wagon and boat for street cleaning and river dumping purposes. Numerous experiments were made in England, with the result that by 1820, or thereabouts, steam stage coaches were running regularly for public conveyance. They were large, heavy and noisy, but were winning their way into public favor, to the detriment of the horse coaches, and with such vigor that, about 1844, restrictive legislation was passed, making it necessary for them to be preceded by a man with a red flag, and imposing other annoying requirements. This legislation forced them to cease running, and England lost a great [p.2] industry, which for the past fifteen years, she has been trying to regain.

Modern Experimenters.—In 1861, Philip Dudgeon exhibited at New York a steam vehicle, and, about the same time, Lenoir, a Frenchman, patented a non-compression, 2-cycle gas-engine, ignited by jump spark, and applied one to propelling a vehicle in the next year. About 1872, Brayton, an American, fitted his patented gas engine to an omnibus at Pittsburgh and to a street car at Providence. About 1885, Copeland, of Camden, N. J., fitted a small steam engine to a bicycle, and later built two small steam tricycles. With the exception of the English work, halted by unwise legislation, as already stated, these attempts were simply isolated experiments, and were not followed by further work and successful service. While there were some gas engine and electric motor exceptions, these earlier experiments were mostly made with steam engines, and involved a complexity and weight that was greatly against their success. But, about the middle eighties of the nineteenth century, the gas engine had been so well developed that it began to appeal to a number of inventors as the proper solution, and the beginning of the present era became manifest.

The Development of the Gas Engine.—The internal combustion engine embodies a very old idea, which was once proposed in connection with gunpowder, but the high pressures, and many other difficulties involved in such use, prevented its early development. In 1844 and 1846, 2-cycle engines, air and water cooled, were patented in the United States. The Lenoir and Brayton work has been mentioned. The theory of the modern gas engine was first propounded by Beau de Rochas, a French scientist, about 1862. Otto, a German, brought out his free-piston engine in the early 70s, and improved on this in his “silent” engine, which was exhibited at the Centennial Exposition in 1876. This proved economical in operation, and crowded the Brayton engine out of the market. Its success stimulated the gas engine business, and the termination of Otto's patent protection threw the 4-cycle engine open to the world about 1886. Having a proved success before them, inventors ceased working on the 2-cycle engine, and turned to the 4-cycle. Daimler and Benz, in Germany, and Duryea, in America, early saw the possibilities of the gas engine for vehicle propulsion, and pushed it forward. Benz applied the engine as he found it, and turned out many vehicles about 1885. Daimler brought out the small high-speed engine about the same time, and is thus accepted as the “father of the gas engine automobile.” 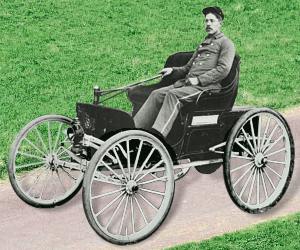 Development in America.—In America the roads were not so favorable to motor vehicles, as in Europe, with the result that the first Duryea carriage was not built 'till 1892, although begun in 1891. Another was finished in 1893. The [p.3] first Haynes was finished in 1894, and the first Winton in 1896. All of these were propelled by single cylinder engines, but were the beginnings of lines since continuous, and, therefore, must be counted as successes. The first double-cylinder Duryea was made in 1894, and the first double-cylinder Haynes in 1895. An enterprising French journal held a contest in 1894, at which an average speed of eight miles per hour was shown. The success of a similar contest in 1895 attracted the Chicago “Times-Herald,” which offered $5,000 in prizes and a gold medal for a similar contest at Chicago on Thanksgiving Day, 1895. Eighty-three entries, some foreign, were received. A Duryea car won the contest, made extremely difficult by a foot of crusted snow on which pedestrians walked without breaking through. One foreign vehicle managed to cover the course that day while another finished next day, thus clearly showing the inferiority of foreign constructions at that time. A second contest was held at New York on Decoration Day, 1896, for $3,000, offered by the Cosmopolitan Magazine, and was won by three Duryeas, the foreign products not being able to return unaided.

The London-Brighton Race.—A further evidence of the superiority of the American products was given at the first event in England, held November 14th, 1896, to celebrate the repeal of the restrictive road laws of 1844. Nearly fifty entries including the first, second and third winners of the French racing events of that year, were present, and all were beaten by a Duryea, nearly an hour, in the distance of 52 miles from London to Brighton. This unique victory of an American automobile over the best foreign constructions stood for years as evidence of the advanced positions of American constructors. Pneumatic tires, artillery wheels, spray carburetors, electric ignition by mechanical generator, throttle control, and many modern features were first shown on those winners, and contributed to the result.

Electric and Steam Vehicles.—A practical electric vehicle was exhibited by Sturges at Chicago in 1893, and the first of an electric line was entered by Morris and Salom at the “Times-Herald” contest of 1895, although unable to compete under the severe road conditions. About 1896, Whitney made a light steamer, and, at the Mechanics Fair in 1898, a number of such vehicles were shown at Charles River Park near Boston, at which time the Stanley steamers first came before the public. These were offered at an unprofitably low price, and found many buyers. Makers took up this type, and thousands of them were marketed, making the real opening of the automobile business. They proved to be toys, however, very expensive to maintain and difficult to operate, and the business quickly toppled, to be followed by the more slowly and safely developed gasolene car, which has grown since to such wonderful proportions. The electric vehicle, while always having a field, never had much following. In [p.4] the early years “electric” was a word to conjure with, and the general public was not interested, if it was not “electric.” The cost and weight of this type of car limited it greatly and caused it to be almost ignored, but in the largely-expanded business now existing the electric finds a considerable field, and is coming rapidly to its own.


Images added (not in original article) from sources shown above. Duryea photo from Horseless Age: The Automobile Trade Magazine (1895), Vol. 1, 20. Text from Charles E. Duryea and James Edward Homans, The Automobile Book: a Practical Treatise on the Construction, Operation and Care of Motor Cars Propelled by Gasoline Engines; with Full Explanations of All the Essential Parts (1915), 1-4. (source)