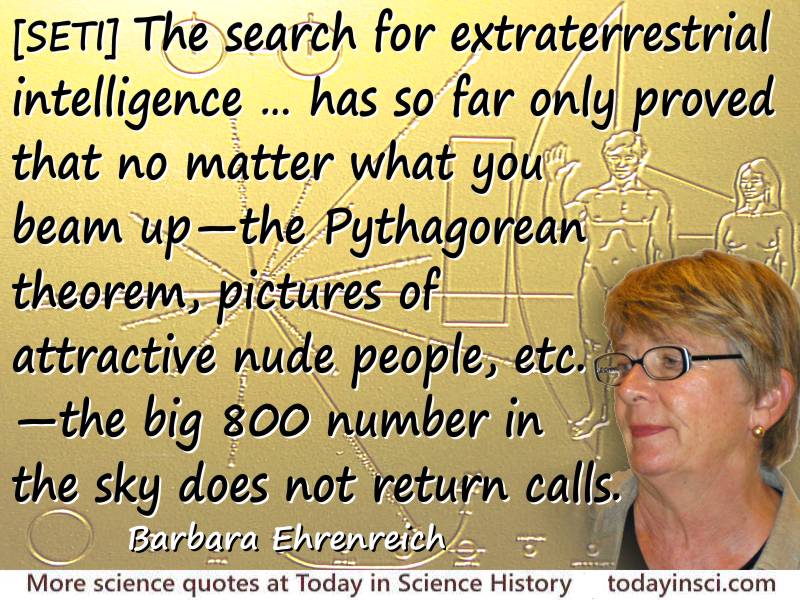 “SETI … has so far only proved that no matter what you beam up—the Pythagorean theorem, pictures of attractive nude people, etc.—the big 800 number in the sky does not return calls.”
— Barbara Ehrenreich
From article in Mother Jones Magazine (1986)

Barbara Ehrenreich is now best known for her longtime output of articles contributed to, for example, the New York Times, Harpers, Progressive, and Time magazine. She is the author of thirteen books, including a New York Times bestseller, Nickel and Dimed. Although now writing in the role of a political activist, she began with a science training in theoretical physics and cell biology, and with this background she was qualified to write about the search for knowlege about the universe, including whether there is intelligent life elsewhere.

This quote comes from a light-hearted article in Mother Jones Magazine in 1986, at which time President Ronald Reagan’s “Star Wars” defense pipe-dream (announced 23 Mar 1983) was still topical. After some satirical jabs at that initiative, she reflected on science fiction, alien life forms, the solar system, black holes and more.

In her opening paragraph, Ehrenreich recalls her early life, when “still young enough to be dissatisfied with the limited information available,” and continued, “the night sky meant a lot more than a connect-the-dots lesson in ancient Roman mythology. It was a threshold leading to better worlds, where, according to my monthly Galaxymagazine, humanoids of great strength and surpassing intelligence drove about purposefully from star to star. In sci-fi convention, life-forms that hadn’t developed space travel were mere prehistory—the horseshoe crabs of the cosmic scene—and something of the humiliation of being stuck on a provincial planet in a galactic backwater has stayed with me ever since.”

This led her to comment on the current radio telecope program to broadcast to possible other life forms in the universe, while also listening, which so far has not discovered any intelligible incoming signals:

The search for extraterrestrial intelligence (SETI, to us insiders) has so far only proved that no matter what you beam up—the Pythagorean theorem, pictures of attractive nude people, etc.—the big 800 number in the sky does not return calls.

In her concluding sentences, Ehrenreich returned to her opening remark about her childhood thoughts, writing about her then present day when above the atmosphere, orbitting space weaponry had been proposed:

I’d still like to know, still like to meet whoever’s out there, still like to think my descendants won’t be stuck here forever, toiling away on a large rock near a small-sized star. And for the time being, when I look up at night, I want to sense the huge, untidy humor of infinity—not a grave-stone of our own making pressing down on us.


From essay 'First Person Secular: Blocking the Gates to Heaven', Mother Jones Magazine (Jun 1986), 48. Collected in The Worst Years of our Lives: Irreverent Notes from a Decade of Greed (1995), 267. (source)