The First Flight from Shore to Ship

How Ely Flew from Selfridge Field Across Country and Landed on the U.S.S. “Pennsylvania” 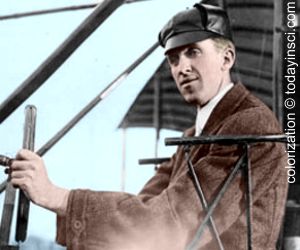 Ely made the first attempt to fly from shore to a warship and alight thereon the 18th inst. [18 Jan 1911]. The photographs reproduced herewith show Ely's Curtiss biplane just as it was about to alight upon the special platform and also after it had alighted and and was being brought to rest by a score of ropes stretched across the platform above the two rails which ran its entire length. These ropes were attached to sand bags at each end, and they were found to act as an efficient brake in checking the momentum of the machine. Although Ely had floats fitted beneath the lower plane on each side of the center section, this proved to be an unnecessary precaution. He made the flight to the “Pennsylvania,” which was anchored amid the dense shipping in San Francisco Bay, in 13 minutes, and arrived upon the worship at three minutes before 11 A.M. In flying the 12 miles from Selfridge field, he had risen to a height of 2,000 feet and passed over the San Bruno mountains. Soon after the start Ely was espied by the sailors in the fighting tops of the warship, a tiny speck above the mountains. The speck grew larger as it rapidly approached and the surfaces of the biplane were outlined against the sky. As it neared the harbor Ely's air craft descended rapidly until, when he flew over the “West Virginia'' and the other smaller vessels, he was only 150 to 200 feet in the air. At just the right moment he shut off his motor and glided down to the platform on the stern of the “Pennsylvania.” He struck this 32 x 127-foot platform 25 feet from its outer end, which sloped downward 4 feet in 10. 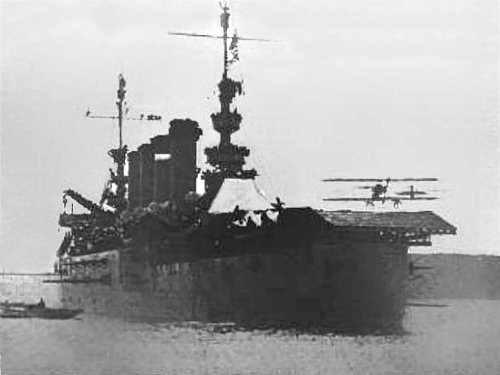 Aviator Ely about to alight on the Pennsylvania after a 12-mile flight. 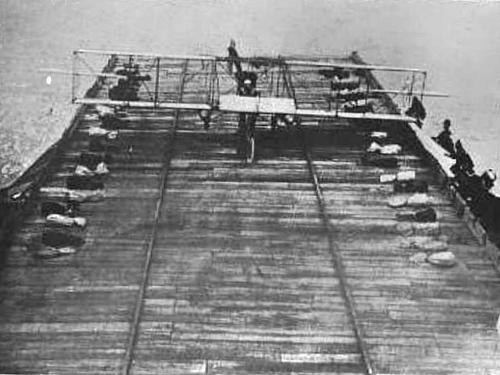 Ely's biplane coming to rest on the special platform.
The ropes stretched across between sand bags checked the forward movement of the biplane without shock or jar.

After a rесерtion on shipboard lasting an hour, Ely started from the vessel without any difficulty and flew back to the aviation field again in 13 minutes.

Thus was accomplished the first round trip flight from shore to ship. Ely had previously flown from ship to shore in Hamilton Roads last November. In both instances he won a prize of $500 offered by the U. S. Aeronautical Reserve. His excellent flights have increased interest in the aeroplane for naval use and will no doubt help in getting through Congress the appropriation of $25,000 recently asked for by Secretary of the Navy Meyer for experiments in aviation. The success of Glenn Curtiss in rising from the surface of the water in his machine mounted on floats at San Diego on the 26th of January, will also help along the cause of aviation in the Navy.


Image of Ely in pilot seat added (not in original article) from source shown above. Two ship photos and text from Scientific American (4 Feb 1911), 104, 108. (source)