Biography from A History of American Manufactures (1866) 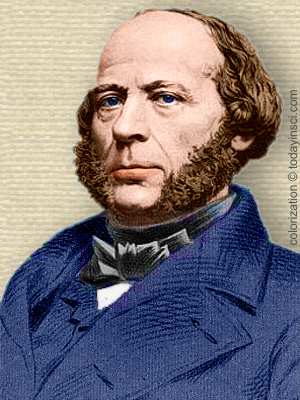 John Ericsson of New York, whose name, during the late Rebellion, became a household word with the American people, by his valuable contributions of engineering skill, was born in the Province of Wermeland, Sweden, in 1803. The son of a mining proprietor, his earliest impressions of machinery were derived from the engines and apparatus for working mines. While yet a mere boy of eleven, he attracted the attention of the celebrated Count Platen, and was appointed a cadet in the Swedish Engineer Corps. In 1820, he entered the army as an ensign, and was soon promoted to a lieutenantcy. In 1826, be obtained leave of absence for a visit to England, with a view of introducing his invention of a flame engine, which be had exhibited in a machine of about ten horse-power. This engine did not realize his expectations, and involved expenditures which induced him to resign his commission in the army and devote himself to mechanics.

Numerous inventions followed, among which may be mentioned the steam boiler on the principle of artificial draft, (or the introduction or which he joined the established mechanical house of John Braithwaite. After having been applied to numerous boilers for manufacturing purposes, in London, with success, effecting a great saving of fuel, and dispensing with the huge smoke-stacks, this invention was applied to railway locomotion on the Liverpool and Manchester Railway, in the fall of 1829. The principle of artificial draft which characterized this engine is yet retained in all locomotives; but a different mode of producing it was soon after accidentally discovered, and the original inventor derived no benefit from it.

In 1883, he reduced to practice his long-cherished project of a Caloric Engine, and submitted the result to the scientific world in London. The invention excited very general interest, and lectures were delivered in explanation of it by eminent scientific men in England; but the high temperature so affected its working parts, that the machine, as at first constructed, was not available for practical purposes. More recently, he has succeeded in improving upon the original idea, and has produced engines with cylinders varying from six to thirty six inches in diameter, that are now applied successfully in pumping, printing, turning light machinery of various kinds, and working telegraphic instruments and sewing machines. Several hundred of these are now in practical operation, but the extent of power attainable by this process has not, we believe, even yet been fully ascertained.

In 1839, Mr. Ericsson came to the United States, and was employed under the direction of the Navy Department in the construction of the United State ship-of-war, “Princeton,” which was the first steamship ever built with the propelling machinery under the water-line and out of the reach of shot. This vessel was distinguished for numerous mechanical novelties besides the propeller, among which were a direct acting engine of great simplicity, the sliding telescope chimney, and gun carriages with machinery for checking the recoil of the gun.

Mr. Ericsson's list of inventions are so numerous that if set forth in detail they would of themselves fill up a volume. At the great World's Fair in London, in 1851, he exhibited an instrument for measuring distances at sea; a hydrostatic gauge for measuring the volume of fluids under pressure; a reciprocating fluid metre for measuring the quantity of water which passes through pipes during definite periods; an alarm barometer; a pyrometer, intended as a standard measure of temperature, from the freezing point of water up to the melting point or iron; a rotary fluid meter, the principle of which is the measurement of fluids by the velocity with which they pass through apertures of definite dimensions; and a sea lead, contrived for taking soundings at sea without rounding the vessel to the wind, and independently of the length of the lead line. His recent inventions, especially the new form of iron-clad war vessels, known as the Monitors, are so familiar to intelligent readers that they need not any other elucidation than is given them elsewhere in this work.

Mr. Ericsson is now a resident of New York, and a most indefatigable worker. It is no uncommon circumstance for him to pass sixteen hours a day at his table in the execution of detailed mechanical drawings, which he throws off with remarkable facility.


Image added (not in original article) from source shown above. Text from The History of Manufactures in the United States (1866), 541-542. (source)