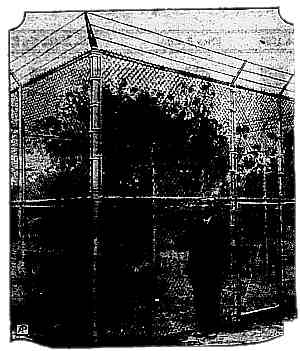 James E. Markham, Illinois farmer, standing guard over peach tree he sold to a St. Louis, Mo., nursery after experimenting five years to develop a normal fruit with a dwarfed seed. He was paid $2,500 for the tree. (source)

From The Evening Independent (1928)

Fairfield, Ill.—James E. Markham worked five years to produce a peach that would be of normal size but have a very small seed. His efforts so discouraged him that six months ago he decided to sell the farm. There was no buyer, so he went back to his experiment.

One day he found a tree full of peaches that in maturing had turned a vivid red color. He cut into some of the fruit and discovered the seeds were no larger than those of plums.

A sample of the new peach was sent to a St. Louis, Mo., nursery with a penciled note of explanation. The next day an executive of the nursery was at his farm and within a few hours had purchased the tree for $2,500. A steel cage was built around the tree until its buds could be stripped away. It cost $1,000 to build the cage, and Markham mounted guard for his customer.

Five bushels of fruit were taken from the tree. The peaches were slightly larger than the typical Illinois peach. Nothing has been revealed concerning the development of the “Markham peach,” as it is to be known, except that it is the result of a long process of serum treatment, pollenization and grafting. It ripens two weeks later than the Hale variety.