Early history of the society given in The Times (1929)
on the centenary of receiving its royal charter in 1829.

As is often the case with an institution which came into existence by stages, there are several dates on which a centenary celebration might have been justified, but, as the council has announced in its annual reports for some years, 1929 was selected as the most appropriate. 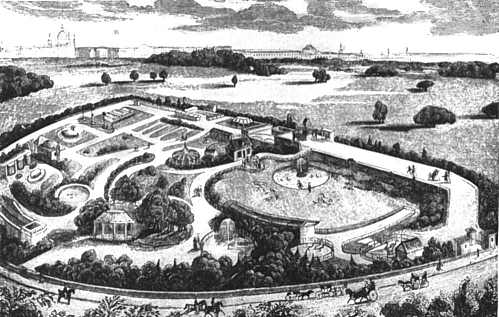 Plan of the Grounds of the Zoological Gardens, by Ethan Allen Andrews. In its early days, 1829, when as property of the Zoological Society it was open only to members and such of the public as obtained consent of members. At that period it was said The vulgar are too fond of irritating the fiercer animals and of teasing and hurting those that are gentle.

The first possible date was 1822, for in November of that year some fellows of the Linnean Society, meeting at the house of William Kirby, the entomologist, gratified their discontent with the disproportionately small attention given to zoology by the Linnean Society by deciding to form a Zoological Club. They were still tied by loyalty to their parent society, and when they drafted the rules of the new body they limited membership to fellows of the Linnean society, and arranged that their scientific work should be published by the society. The work they contemplated and for some time carried out did not include the maintenance of a living collection. There is still uncertainty over the transition from the Zoological Club of the Linnean society to a Zoological Society with the chief object of establishing a zoological garden, and there is reason to believe that the latter had an independent origin, largely at the instigation of Sir Stamford Raffles, who, although a fellow of the Linnean society, does not appear to have been a member of the Zoological Club.

The first known prospectus of the Zoological Society was issued in 1825 and announced as its object the formation of a society that should have the same relations to the zoological and animal life that the Horticultural society bore to botany and the animal kingdom. There were 77 original subscribers, among whom may be mentioned Sir Stamford Raffles, Sir Humphrey Davy, president of the Royal Society, the duke of Bedford, the Marquis of Lansdowne, Robert Peel and Alexander Baring, M.P. In this prospectus there was no suggestion of the existence of the Zoological Club of the Linnean Society, or of limitation of the members of the new society to fellows of the Linnean Society. But there was overlapping of interest, and Mr Vigors, who was the first secretary and last chairman of the Zoological club, was the first secretary of the Zoological Society. The club was dissolved, apparently, in 1829, by which time most of its members had joined the new society. 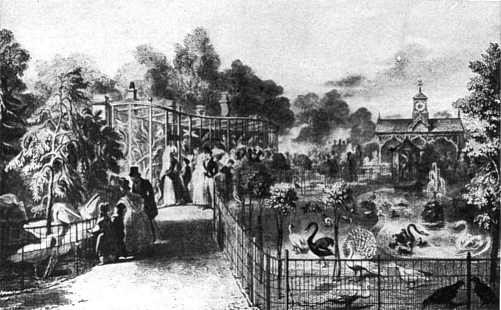 Waterfowl Lawn at the London Zoo in 1830, when visitors and the birds on display appear well satisfied with their cozy associations.

A house was obtained in Bruton-street for the new society, where meetings were held, a museum established, and a certain number of living birds and mammals kept. In the course of 1826 negotiations with the Crown were successfully conducted for the use of part of Regent's Park, and the latter part of 1826 and 1927 were occupied with the laying-out of the new Zoological gardens. Early in 1828 there were a few pinioned wild duck on a lake, an emu, an otter, some silver-haired rabbits and several birds of prey. It is reported that on February 25, 1828, there were four visitors to the gardens, but under what conditions they were admitted is not known. On April 27, 1828, a superintendent was appointed, and it was decided that visitors should be admitted on the presentation of a voucher from a fellow, and the payment of 1s*. Considerable progress was made during the remainder of 1828 in stocking and laying out the gardens. The first report of the council appeared in 1829, when the society received its Royal Charter, and the oldest voucher for admittance that has been traced was signed by a fellow who did not join the society until 1829.