The first central electricity generating station in the U.S. 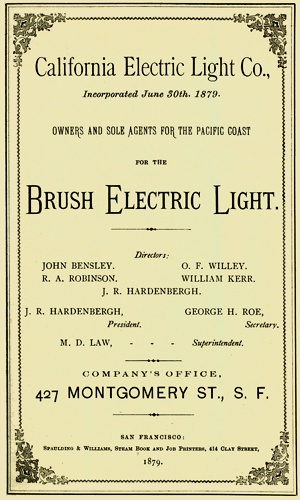 On 30 Jun 1879, a group of businessmen filed articles of incorporation in San Francisco forming the California Electric Light Company. It became the first company in the U.S. to build a central generating station to sell electricity to the public. Power was provided for arc lamps lighting a number of nearby businesses and hotels.

They published a 16-page circular to introduce the benefits of the new artificial lights they offered. The largest type in the middle of the cover displayed the title “Brush Electric Light.” At the top of the cover, the company name was in somewhat smaller type, followed by the notation, “Incorporated June 30th, 1879.” The company claimed they were “Owners and Sole Agents for the Pacific Coast.”

According to the San Francisco Municipal Reports1 (1897), “The first electric light in actual use was in September. 1879, prior to which an exhibition was given in the Mechanics’ Pavilion in 1878. In 1874 an exhibition of an electric light was given by the Rev. Jos. M Neri, from the roof of St. Ignatius College, on Market street.’’

The Pacific Electrician, as quoted in the Western Electrician (1890), wrote that “in 1878 the electric light made its appearance in San Francisco, and was exhibited at the Palace Hotel.”

The Western Electrician continued with more history of the California Electric Light Co. After the company was incorporated it “commenced furnishing Brush arc lights from the central station built in the rear of where the Flood building now stands. This was the first station erected for the distribution of lights from a common center. These works were entirely destroyed by fire on April 24, 1880. The company immediately erected a new station at 117 O’Farrell street. In less than two years the business grew beyond its capacity, and new works were erected on Jessie street. These were greatly enlarged in 1985, and in less than three years were found inadequate. A new building has since been constructed on Townsend street near Third. Nearly $1,000,000 is invested in the plant; and the number of arcs furnished in this city is nearly 2,000. Arrangements are now being made to introduce incandescent lights to the number of 10,000, by means of the alternating apparatus. This company has not confined its business to San Francisco, but, through individuals and ‘sub companies,’ has established electric lighting plants in seventeen other cities and towns, besides erecting some fifty private plants. The company is also engaged in the business of the distribution of electric power. and in establishing power plants. Starting with one small sewing machine electric motor in 1887, the business has increased, till it has assumed very large proportions.”

On 21 Feb 1893, George O. Low, an Electrical Inspector of the Pacific Insurance Union, presented a paper about Electric Stations as Insurance Risks. He read it to the 17th regular annual meeting of the Fire Underwriters’ Association in San Francisco. He stated his aim was to “correct certain errors which had been made in the estimation of electric stations as insurance risks,” so that “electric interests would be more likely to extend operation.”

Low named the California Electric Company as “the first central station in America, if not in the world, from which electricity was furnished to the public as a lighting commodity.” He continued, “In studying electric stations as insurance risks, it is quite impossible for the fire underwriter to find a more interesting and instructive bit of history than that afforded during its brief existence. Like too many of the original electric stations, this pioneer plant was burned.”

In his paper, Low gave the full text of a letter, “replete with interest,” from the company describing the cause of the fire and the loss. Thus, the background of the company can be read in the words of one (unnamed) of its incorporators:

“Regarding the fire that destroyed our original works, I will state that the California Electric Light Company was incorporated June 30,1879. At that time electric lights had been in use in a number of mills and factories where power was already available, but no plant had been erected in any city for the purpose of generating electricity and distributing electric light to the public. Our people—that is, the writer and the other incorporators of the Company—being unable to obtain any information regarding the business of electric lighting, because no public electric lighting had ever been done, determined to ascertain whether the business could be made profitable. We then erected a station— if station it could be called—for the purpose of ascertaining, first, whether it was practicable to distribute electric lights throughout the city to the general public, and, second, whether the people would take those lights and pay a price for them that would show a profit. Naturally, it being simply an experiment, the cheapest building that would answer the purpose was constructed—simply 4x4 uprights, a wooden floor laid in the ground, and the sides of the building covered with sheet iron. The building itself was situated in the rear of where the Flood building now stands, and the entrance to it was through a tunnel. The boiler, engine, dynamos, oil-house, coal pile, and everything was huddled together in this one enclosure as cheaply as it was possible to do it. We realized at the time that the expenditure we were then making was, as stated, merely experimental, and would be of no value if the business amounted to nothing. The machinery was stopped at midnight, no watchman was engaged, the building was in the rear so that it could not be seen from the street, and we have never been able to determine, whether, in raking out the fire before shutting down, some coals were left on the floor, which was saturated with grease, or whether some tramp came in to lodge, but we do know, that on the morning of April 24, 1880, the fire took place. The apparatus was damaged, of course, but we congratulate ourselves that the fire took place when it did, because we otherwise would probably have made temporary additions, and would not so soon have constructed a proper station. There was no insurance loss on the plant, as it was uninsured.

“The engine that was in that fire is today in use in our Station A; the boiler that was there used, is also now in use in Station A, of course, having new tubes and other repairs. Some of the dynamos that were there in use, that came through the fire and were destroyed as far as ninety-nine dynamos out of a hundred are destroyed by fire, were repaired by ourselves, are now and ever since have been in use in our Station A. Another of these ‘destroyed’ dynamos was rewound and sold to the Selby Smelting Works, and has been in use ever since. All these dynamos are practically as good as though the fire had never occurred, and the repairs to them simply represented the wire and labor of winding, less the amount received for the old wire taken off.”

Some further insight is provided by Low’s next comments: “At the present day the promoters of the electric lighting station in question appear remarkable in two respects: They were strictly the pioneers in what is one of the world's youngest yet most promising industries, and, what is of more immediate concern, their tinder-box property was uninsured. As an insurance risk this original electric station was no worse than hardly any other similar plant erected prior to, say, two or three years ago—in fact, an overwhelming majority of all electric light plants placed previous to the last two or three years are of this wretched construction. In addition to being of historic interest, the station described is typical in several regards. We are all too familiar with the makeshift construction of the buildings that contained these original stations. In many cases the buildings were put up with absolutely no regard for lire risks. In them were placed valuable plants consisting of steam and electric machinery. Boilers and engines with their fire-boxes, flues, piles of fuel, steam-pipes, oil and greasy waste, constitute a fire hazard necessitating on one hand the exercising of no little skill in its construction, while dynamos, with their accessory appliances and wiring all ladened with a new and most potent form of energy, formed hazards which were unheard of and unknown. Then, again, as defined in our typical station, the projectors of these early stations were all venturing in an untrodden territory. They did not know the fate their enterprise would meet; they simply advanced upon belief, and under such a condition it is but natural that every unnecessary expenditure should have been avoided. Everything was temporary and as cheap as possible; apparently no one knew how to erect a station on any other plan, or, at least, no one had done so. Other than the belief that a venture was being made, there is no legitimate reason why the steam plants of these stations should not have been installed and maintained in better condition; but it was not done, and the country over knows that no power-consuming industry has ever shown such universal and shameful disregard for the principles of ordinary business prudence than did these early electric light stations. Only the inevitable could be expected. It came, and the buildings, which were deemed unfit for any other occupancy, proved less fit for electric stations.”

As for the early history of the subsequent development of the industry in the following few years, Low continued: “New and undreamed of hazards of electricity were discovered, numerous and heavy losses from electric stations fires were encountered, insurance rates very properly became high, and it cannot be doubted that the insurance companies were entitled to the rates imposed. The errors in electrical construction referred to should be considered as the strictly legitimate ones due to ignorance and inexperience in the rearing of a new industry. As such they are deserving of the utmost consideration.”

Text by Ian Ellis, webmaster, with quotes from publications cited in footnotes. Image of cover from source show above.