The Telephone, a Telegraphic Alarm.

from Journal of the Franklin Institute (1855)

[p.91] In consequence of the curious and very important experiments on Phonic Signals recorded by Mr. Cresson in the Number for December, 1854, we take from the pages of the London Illustrated News, 1844, the following description of a very neat, compact, and, we do not doubt, efficient instrument for producing sounds, when a steam whistle cannot be used. Editor. 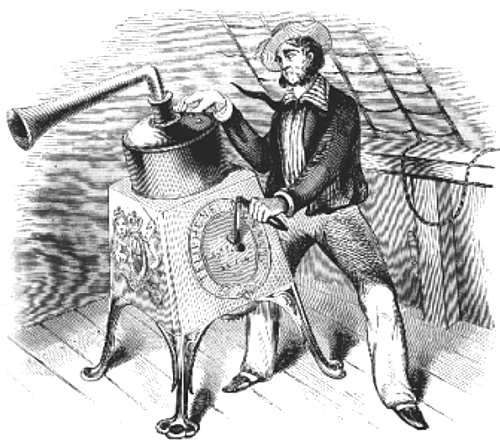 Amongst the many valuable inventions recently laid before the Lords of the Admiralty, that of the “Telephone, or Marine Alarm and Signal Trumpet,” by Captain J. N. Taylor, R.N., is, perhaps, one of the most important; its objects being to convey sound signals to vessels at sea, or in harbor; to transmit orders to and from forts and ships; to prevent collisions at sea, or on railroads; to transmit orders on the field of battle, from position to position, as an auxiliary to the duties of the aide-decamp, or orderly, who frequently rides with important despatches in the face of an enemy in great haste and imminent risk ; to inform engine stations in case of fire ; for alarms in dock-yards, &c.; and as a means of communication between the palaces and halls of the nobility and gentry, &c.

The principle of the Telephone is one of musical accord, composed of four alternate notes, given out separately, played like those of the cornet, and prolonged whilst the finger remains on the note. The instrument is formed of a chamber, into which air is compressed through three or more alternate pumps, which are moved by a corresponding number of cranks, set in motion by a winch ; and of a set of piston keys, with valved apertures, giving free egress to the compressed air, which, in its passage, acts upon a series of metallic springs, and produces the required sounds through four pipes or trumpets.

[p.92] The Indicator.—The Indicator, or Signal Tell-Tale, to be placed on the Telephone Drum, to denote the signals made, is composed of 16 holes, in four parallel lines, and numbered at the top 1, 2, 3, 4. The first number made is to be indicated by a peg, placed under the required figure, in the first horizontal column, colored red; the second number in the white; the third in the blue; and the fourth in the yellow line, observing that only one peg is to be placed in the same horizontal row of holes. The Telephone gamut notes are arranged for numbers either by the public or private key. The alternate notes of the gamut C, E, G, C, being denoted by 1, 2, 3, 4.

The Telephone Gamut.—The Telephone, No. 1, will convey signals four or five miles; and as a fleet sailing in three columns will not extend over more than three miles, it will be sufficient for the guidance of the whole fleet, in foggy weather, by night or day. For fixed stations, light-vessels, light-houses, preventive ports, &c., it is made the size of a large drum, with trumpet in accordance, and will convey signals in foggy weather six or eight miles; or by unscrewing the trumpet, and applying a parabolic phonic reflector to it, the sound will be conveyed to a much greater distance.

Ships or steamers passing each other, by giving the signals for “helm to port,” &c., &c., would prevent those dreadful collisions and loss of life which frequently occur, either from indecision, the thickness of the fog, or other causes.

As an alarm-instrument, to be used on light-vessels, light-houses, dangerous headlands, &c., the Telephone is most important, as it will be the means of preventing the great sacrifice of life and property, which so frequently takes place in foggy weather, from the lights being invisible. Vessels would also be directed by it to the pier or harbor, and the height of the tide for entering conveyed to those in the offing. On railroads, too, it is of great importance, as an instant signal for stopping the train, increasing the speed, or of the approach of another engine, may be given from the guard to the engineer.

Another advantage of the above instrument is, that it can be employed with a secret key, so that two persons in correspondence will understand the communication, while it remains unintelligible to others.

Sir,—I would suggest that the late Mr. Stuart’s “sea telephone” (see p. 579 of your last volume*) was nothing more than a method of conveying signals at sea by the agency of sound. In January, 1828, a M. Sudré presented to the Academy of Fine Arts in Paris a system of transmitting words by means of musical sounds, which he called “telephony.” It was the subject of extensive experiments, both in the French navy and elsewhere, an account of which may be found in the Mechanics’ Magazine for July, 1835, p. 269. The inventor visited England in that year, and he explained his method at a meeting of the Royal Society. As an illustration, it may be stated that the word “age” would be transmitted by playing on a trumpet or other instrument the notes la (a), sol (g), and mi (e). In July, 1884, Captain J. N. Tayler, R.N., showed a foghorn, which he called a “telephone,” at the Admiralty. The following extract from a newspaper of the day shows what this “telephone’’ was:

“At an Admiralty levée, last week, Captain J. N. Taylor’s telephone instrument was exhibited to the Lords Commissioners. The chief object of this powerful wind instrument is to convey signals during foggy weather, when no other means presents itself, by sounds produced by means of compressed air forced through trumpets, which can be heard at a distance of six miles. This important instrument will tend to prevent collision at sea and on railways, and will lessen the horrors of shipwreck and capture, and give notice of fire. Vessels in the offing will be by it directed into harbour, and the time to enter tide harbours made known from the pier-head. Four notes are played by opening the valves of the recipient, and the intensity of sound is proportioned to the compression of the internal air. The small-sized telephone instrument, which is portable, was tried on the river, and the signal notes were distinctly heard four miles off.”

The word was used in another sense by Prof. Wheatstone, who says, in his reply to Cooke (W. F. Cooke, the Electric Telegraph, 1857, p. 114): “When I made in 1823 my important discovery that sounds of all kinds might be transmitted perfectly and powerfully through solid wires, and reproduced in distant places, I thought that I had the most efficient and economical means of establishing a telegraphic (or rather a telephonic) communication between two remote points that could be thought of. My ideas respecting a communication of this kind between London and Edinburgh you will find in the Journal of the Royal Institution for 1828. Experiments on a larger scale, however, showed that the velocity of sound was not sufficient to overcome the resistance and enable it to be transmitted efficiently through long lengths of wire.”

I cannot find the paper referred to in the Journal for 1828. That for 1831 is the volume in which the paper appears.

In his answer to the above, Cooke says, at p. 260: “In the meantime, the failure at Portsmouth left his [Wheatstone’s] submarine conception (with his telephone) in abeyance.”

Perhaps some of your American readers will make enquiries about Mr. Stuart’s “telephone” and communicate the result to the Electrical Engineer.—Yours, etc.,R.B P.

R.B.P. was replying to an issue of the magazine two weeks earlier that contained a death notice for the inventor, George Stuart (reproduced below). The information given by R.B.P. was included here for the additional newspaper description of Captain Taylor's ship telephone of 1844. However, note that George Stuart might have devised a quite different invention from Taylor's foghorn. For example, Thomas Edison had by 1889 already made his own experiments using the water as a better sound conducting medium. Edison's apparatus transmitted the noise from a steam whistle from a sounder below the water-line of the ship, controlled by keys somewhat similar to a telegraph instrument. (Guglielmo Marconi's first radio transmission would not come along until 1901.)

* Telephoning at Sea.—The following note is from the obituary of the Daily Chronicle: “Mr. George W. Stuart, inventor of the sea telephone, died of heart disease at New York on December 9th, just after he had secured a promise of capital with a view to pushing his invention.” We are not acquainted with the invention mentioned, nor assured of the possibilities of useful telephone communication between ships, to which it seems to refer. But it is certainly unfortunate that an enthusiastic inventor should die just at the moment when he is within sight of port. If there is anything in Mr. Stuart’s invention, we hope it will not be left to subside without trial.