[p.379] In the early days such as those described by Wells in the opening chapters of his History of the World, iodine was undoubtedly well distributed throughout the earth.

Through the action of natural forces, the readily soluble sodium iodide, which is the salt of iodine commonly found, has been washed down into the sea which now seems to be its chief source. Through action of air and spray from the sea, nearby vegetation contains iodine and animal life near the sea coast obtains sufficient iodine for normal thyroid metabolism.

On the contrary, regions such as Switzerland, the Great Lakes basin and the Cascade Mountain region are practically devoid of iodine and are well known as goiter districts. Minnesota has its share. The water of mountain districts is entirely lacking in iodine. It is interesting to note the great increase of the incidence of goiter in Vienna after the late Austrian emperor Franz Joseph presented the city with a mountain water supply. Seattle, Portland and Tacoma are said to have shown a similar increase as a result of receiving their water supply from the Cascade mountains.

Up to fifty years ago commercial table salt was procured from the ocean and contained iodine salts. Now, thorough refining processes have resulted in the elimination of the iodine from salt of sea origin. Salt from inland sources, such as the Great Salt Lake contains no iodine. All these factors have resulted in eliminating iodine in large measure from human diet.

Animals and fish are subject to goiters as well as man—or shall we say woman. Land-locked salmon are known to develop goiters. Back in 1909, Marine and Lenhart prevented goiter in trout by the addition of iodine to the water in the ratio of one to a million parts.

[p.380] The work of American investigators—Marine and his co-workers in particular—has called attention to the value of the addition of iodine to the diet and they have proven the practical application of iodine administration for the prevention and cure of goiter by the addition of almost homeopathic doses.

In 1917 Marine and Kimball* began extensive experiments on the school children of Akron, Ohio, and in brief the result of two and a half years’ observation showed that only five goiters developed in some 2,190 pupils who were given a grain of sodium iodide over a period of ten days twice a year, while 495 goiters developed in some 7,320 cases who were not given the iodine. Observation showed, too, that this administration of iodine reduced roughly five times as many goiters as occurred in control cases not given iodine.

Klinger of Zurich reported a similar experience. The goiter incidence was reduced in 760 children from 90 per cent to 28 per cent in fifteen months by the administration of 10 to 15 mg. of iodine weekly. He also reported that thyroid enlargement in both the fetus and pregnant mother can be prevented by the administration of two grams of sodium iodide during the first half of pregnancy.

We venture to predict that the time is close at hand when iodine will be given almost universally in this country, particularly in goiterous districts. School children in the grammar school grades need it most for the adolescent goiter so common in young girls is most apt to occur from puberty on. It is a simple matter to give minute amounts of the sodium salt in sweet chocolate or wafers.

Perhaps the simplest method of iodine administration is the addition of minute quantities of sodium iodide (1 mg. NaI to 15 grams NaCl.) to the table salt and without doubt a special brand of iodized table salt will be forthcoming on the market.

A note of warning should be sounded. Although no case of exophthalmic goiter developed in either Marine or Klinger’s series, iodine is absolutely contraindicated in the exophthalmic variety of goiter. It is well established that care should be taken in the administration of iodine to adults with goiters that are suspected of being hyperactive. There is likely to be a rush for iodized salt or iodine in some form by individuals afflicted with goiter and the profession will have to take care in advocating the use of iodine in the prevention of goiter to lay proper emphasis on its contraindication in cases of overactive goiters. 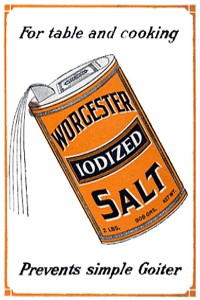 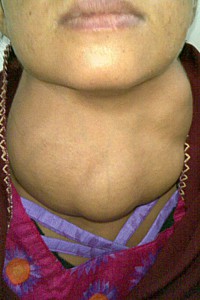