from the Annual Report of the Boston Inspector of Milk (1871) 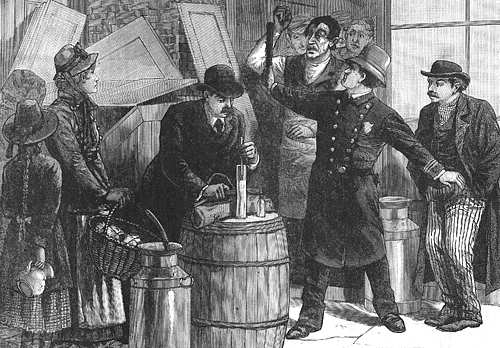 [p.5] The first act to punish fraud in the sale of adulterated milk was passed by the general court of this State [Massachusetts] during the winter of 1856.

This act gave any person the power to make complaint and to prosecute to final judgment in our courts, for violation of its provisions; but, as far as is known, no complaints were made.

To carry out the intent of this law, it was necessary that some person should be appointed who would devote his whole time and energies to the duties of the office, so as fully to meet the requirements of the act, and to protect the consumers of milk from imposition.

During the summer of 1858, much complaint was made by our citizens in regard to the gross adulteration of a large proportion of the milk sold within the limits of our city, and some of our physicians thought that ‘the increased mortality of small children could be readily traced to this adulteration.

[p.6] At the assembling of the general court in the winter of 1859, many interested parties, viz, citizens, milk producers, and some of the Boston milkmen, used their influence to cause a new law to be enacted, which should provide for the appointment of Inspectors of Milk, carefully defining their duties, etc. A law was readily passed, and it was approved by the governor, April 6, 1859.

On the 10th of August, 1859, the Boston office was established. At this time one or two inspectors had been appointed in some of the smaller cities, but only in connection with other duties, so that little or nothing had been done to carry out the requirements of the law. So far as we can learn, Boston was the pioneer in the establishment, on this continent, of an office exclusively devoted to the detection of, and conviction and punishment for, the sale of adulterated milk. To this end, during the past year, your inspector has given his time and attention to visiting private families, stores, and shops, and also the cars employed in bringing milk to Boston.


Image, not in original text, added from source shown above. Text from Boston City Government, City Document No. 24, Twelfth Annual Report of the Inspector of Milk (1871), 5. Collected in Documents of the City of Boston (1872), Vol. 1. (source)