The Nature of Bauxite

from Engineering and Mining Journal (1908) 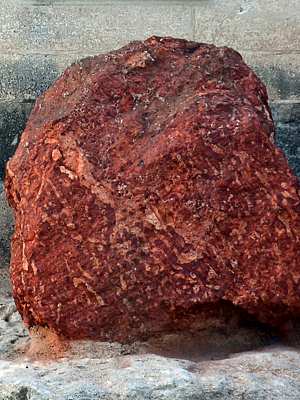 Clay-like block of bauxite, part of a commemorative display at Les Baux-de-Provence, in Southern France. The red-brown color is due to iron oxide. (source)

At a recent meeting of the Société de l’Industrie Minérale, Francis Laur reviewed the history of the discovery and development of bauxite, and outlined some of the various opinions as to its nature and composition.

In 1821 a sample of mineral was found by one Blavier, near the village of Baux, Bouches-de-Rhone, and was sent by him to Berthier, who analyzed it. Berthier published a note on the mineral, which was a new species to him, in Vol. VI of the Annales des Mines1, of that year, in which he stated its composition to be: Al2O3, 52; FeO32, 27.6; water, 20.4; chromium, traces. The deposit was originally opened in connection with iron-smelting works, which were, naturally, soon abandoned, and the occurrence of the mineral was practically forgotten until comparatively recent years.

In 1873, during the boring of a tunnel on the railroad line between Montpellier and Paulhan, a deposit of exceedingly pure and white bauxite was disclosed, which became an object of interest to geologists.

The well known diversity in the color and texture of bauxites can probably be referred to differences in the modes of origin. Some deposits have almost certainly been formed by the action of hot springs, while others have equally certainly been formed by the decomposition in place, of richly aluminous rocks, under atmospheric agencies. In either case bauxite is characteristically amorphous. Study into the nature of bauxite is confused by the double character of alumina, which acts as a base in reaction with silica, forming silicates, and as an acid in the presence of iron, forming ferro-aluminates.

H. Fischer does not admit that bauxite is a mineral species, but considers it a mixture of iron oxide and red clay. Zirkel considers it a mixture of alumina, silica and sesquioxide of iron. Hofman looks upon it as a mixture, in widely varying proportions, of diaspore and limonite. Richards and SainteClaire-Deville consider it a combination between diaspore and brown hematite. Watson, Philips and Hancock agree in thinking of bauxite as a variable mixture, in which the tri-hydrate of alumina, Al2O3 + 3H2O, is the principal constituent. Liebrich thinks that bauxites have the general composition, Al2O3 + nH2O, in which variable proportions of the water are replaced by iron and silica. Bauxite would thus occupy a position between diaspore, with 15 per cent. water, and gibsite, with 34.6 per cent. water.

M. Laur concludes, from his own large experience with French bauxites, that the percentage of alumina tends to hold closely between 68 and 69 per cent., that the total of the three variable elements, silica, iron and water, holds closely to 27 per cent., the remaining 4 per cent. consisting of accidental constituents such as titanium, vanadium, chromium, etc. Although the three variable elements may replace each other in great diversity, their total is never far from the percentage mentioned. Thus, in the case of the white bauxite at Villevyrac, the iron is almost completely replaced by silica; in the red bauxite of Var, iron replaces almost all of the silica and part of the water; while in the Alabama bauxites, both silica and iron are in subordinate amounts, the ore from that district having almost the theoretical composition of the tri-hydrate. At Baux, the three types are found combined.

Titanium is the most common impurity of the accidental group. It has not yet been determined in what form the titanium appears, whether titanate of iron or of alumina, or simply as titanic oxide. Sainte-Claire-Deville is said to have found crystals of rutile in the residue from an analysis of bauxite. The proportion of titanium occasionally reaches 12 per cent., but in ordinary amounts it has no ill effect upon the utility of a bauxite, on account of its insolubility.

Hartley and Ramage have lately subjected bauxite from Antrim, Ireland, to spectroscopic analysis, by which the presence of impurities in minute amounts could be easily detected. In the so-called pure alumina made from this bauxite they found sodium, potassium, copper, iron, lead, gallium and traces of indium. In the crude bauxite they found, in addition to the above, silver, nickel and chromium. In the aluminum made at Foyers from the same material, they found all the previously mentioned elements, and in addition, calcium and manganese, the last two of which, however, were undoubtedly introduced during the electro-chemical process. In bauxite from New South Wales, other chemists are said to have recognized traces of neodymium and lanthanum. 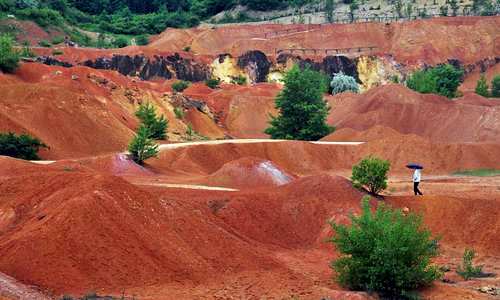