On 3 Dec 1732, at Alloa, Scotland, local surgeon William Tossach resuscitated a suffocated coal-pit miner, James Blair, by mouth-to-mouth rescue breathing. The worker had been “in all appearance dead,” after being been carried up 34 fathoms from the mine “to the Mouth of the Pit, which was between half an Hour and three Quarters after he had been left in the Bottom of it.”

The technique is believed to have been in use from ancient times, so Tossach was probably not the first to utilize expired air ventilation. However, he left what appears to be the first clinical description of the procedure in the medical literature, which he wrote twelve years later. 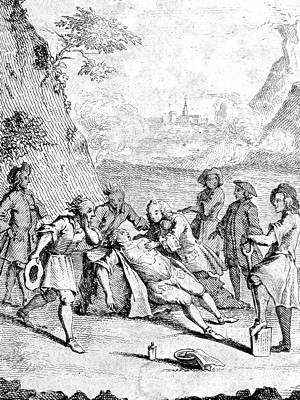 [p.605] LV. A Man dead in Appearance, recovered by distending the Lungs with Air; by Mr. William Tossach Surgeon in Alloa.

I Must submit to better Judges to determine whether the Experiment I made use of was the Mean of saving the Man’s Life on whom it was tried; it is at least very simple, and absolutely safe, and therefore there can be no Harm, if there is not an Advantage, in acquainting the Publick of it.

November 11th, 1732, early in the Morning, an usual Steam was observed to come out of a Coal-pit in this Neighbourhood, belonging to the honourable Sir John Schaw of Greenock, which the People who went down to enquire the Cause of it, found to be the Smoak of Coals that lay about ten Fathoms from the Bottom of the Pit, and were some Way or other set on Fire in two Places. This Pit, and all the others which had any Communication with it, were shut up close, to smother the Flame, and continued [p.606] thus shut till December 3d, when they were all opened. The one, where the Fire had been, sent out a most nauseous Steam, so that No-body could come near it, except to the Windward. After some Hours the Colliers and others ventured down by the Ladders into this Pit, which was thirty-four Fathoms deep; but soon came running up, all panting and breathless; they that came latest, being scarce able to speak so much as to tell that one of their Number, James Blair, was left dead.

Two Men who were no Colliers offered soon after to go down, and others, animated by their Example, accompanied them, and brought up the poor Man by Head, Shoulders, Legs, or Arms; their Hurry was so great, they did not think how they carried him. When he came to the Mouth of the Pit, which was between half an Hour and three Quarters after he had been left in the Bottom of it; two had him by the Arms, and two by the Feet, with his Back uppermost. I made them immediately set him down at a little Distance from the Pit, turning him supine. The Colour of the Skin of his Body was natural, except where it was covered with Coal-dust; his Eyes were staring open, and his Mouth was gaping wide; his Skin was cold; there was not the least Pulse in either [p.607] Heart or Arteries, and not the least Breathing could be observed: So that he was in all Appearance dead. I applied my Mouth close to his, and blowed my Breath as strong as I could, but having neglected to stop his Nostrils, all the Air came out at them; wherefore, taking hold of them with one Hand, and laying my other on his Breast at the left Pap, I blew again my Breath as strong as I could, raising his Chest fully with it, and immediately. I felt six or seven very quick Beats of the Heart; his Thorax continued to play, and the Pulse was felt soon after in the Arteries. I then opened a Vein in his Arm, which, after giving a small Jet sent out the Blood in Drops only, for a Quarter of an Hour, and then he bled freely. In the mean Time I caused him : to be pulled, pushed and rubbed, to assist the Motion of his Blood as much as I could, washed his Face and Temples with Water, and rubbed Sal volatile on his Nose and Lips. Though the Lungs continued to play, after I had first set them in Motion, yet, for more than half an. Hour, it was only as a Pair of Bellows. would have done, that is, he did not so. much as groan, and his Eyes and Mouth. remained both open.

[p.608] After about an Hour he began to, yawn, and to move his Eye-lids, Hands , and Feet; I then put Water, in which I had dropt some Sal volatile into his Mouth, which he swallowed, and caused him to be carried into a House hard-by, where I set him in a Chair reclining backward. In an Hour more he came pretty well to his Senses, and could take Drink, but knew nothing of all that had happened after his lying down at the Foot of the Ladders, till his awaking as it were in the House.

Within four Hours he walked home, and in as many Days returned to his Work, but complained for a Week or two of a violent Pain in his Back, which I believe was owing to the Way of carrying him up out of the Pit.

Lady Schaw, Mr. Bruce of Kennet, and the Reverend Mr. Thomas Turner, and several other Gentlemen, with three or four hundred People of the Neighbourhood, were Witnesses to what I have now related.

By 1740, the Paris Academy of Sciences had officially recommended mouth-to-mouth resuscitation as a method of saving drowning victims.


Image at Wellcome Collection CC by 4.0, cited from Jacobus Benignus Winslow, The Uncertainty of the Signs of Death. Quoted text from William Tossach, 'A Man dead in Appearance, recovered by distending the Lungs with Air', Medical Essays and Observations: revised and published by a Society in Edinburgh (1744), 5, Part 2, Article LX, 605-608. (source)