Electricity, produced from nuclear energy, has been used to light and power a town in the United States. 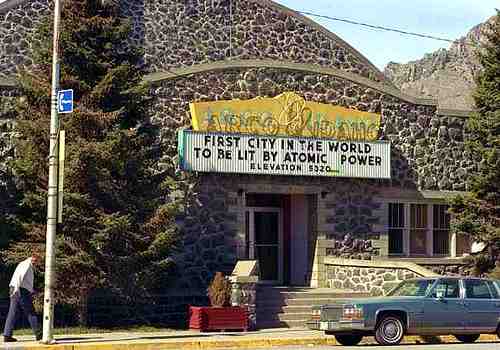 The city of Arco, Idaho was the first in the world to receive all of its electricity from a nuclear power plant. (source)

Arco, Idaho, became the first community in the Nation to receive its entire supply of power from a nuclear source when, on July 17,1955, electricity produced in an experimental nuclear power plant operated by Argonne National Laboratory at the U.S. Atomic Energy Commission's National Reator Testing Station, twenty miles from Arco, was fed into transmission lines supplying the small town. 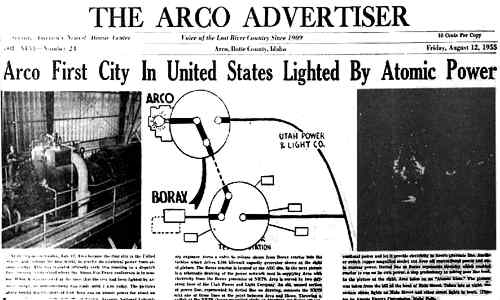 Headline of the newspaper The Arco Advertiser for Friday, 12 August 1955. (source)

When the reactor power was cut in, utility lines supplying conventional power to Arco from the Utah Power and Light Company, were disconnected. The entire community of 1,200 inhabitants then depended solely on nuclear power for more than an hour. 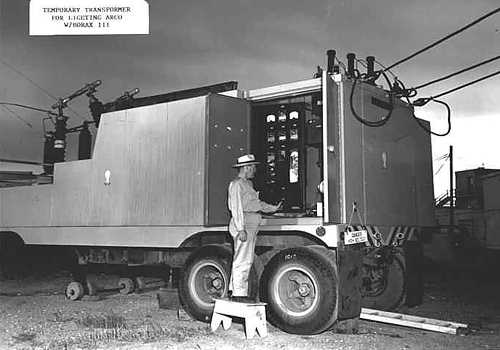 This temporary transformer was used to connect BORAX-III with the town of Arco, Idaho. (source)

Although the transmission of electricity from the nuclear power plant to Arco was, by prior arrangement, discontinued after the demonstration had been completed, the generation of electricity at the testing station site was continued.

A motion picture record of the demonstration was presented to the United Nations today at the International Conference on Peaceful Uses of Atomic Energy, at Geneva, Switzerland. The United States delegation plans to make the film available during the Conference and to representatives of 72 nations in attendance. 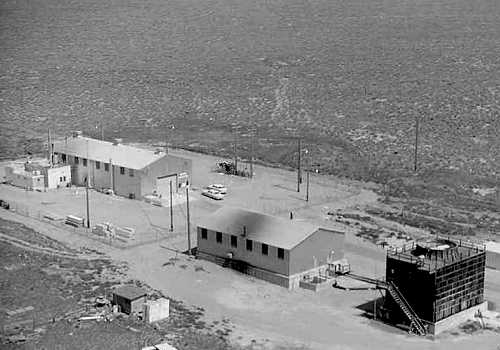 The BORAX-III reactor was the first reactor in the world to provide all of the electricity to an entire town. (source)

The experimental nuclear power plant, known as “BORAX,” short for “Boiling Reactor Experiment,” was the subject of a major technical paper presented to the Conference August 9 by Dr. Walter H. Zinn, Director of Argonne National Laboratory. The plant, which generates more than 2,000 kilowatts of electricity, was designed and constructed by the Laboratory. Harold V. Lichtenberger, who is a U. S. technical advisor at Geneva, is Director of the Laboratory's activities at the testing station.

The reactor for the nuclear power plant has been under development by the Laboratory since 1953. An experimental facility for conducting studies of a reactor of this type was constructed at the testing station site in the summer of 1953 and tests on safety and steady state operating characteristics were conducted. The tests were sufficiently encouraging so that additional studies were made in the summer of 1954.

Experience gained during the operation of this reactor warranted the addition of a turbo-generator so that the steam being produced could be converted into a more usable form of energy. This generation plant was placed into operation on June 28, 1955, and the production of electricity is continuing on a routine basis.

The reactor consists of a pressure vessel containing as assemblage of enriched uranium-bearing plates submerged in water, plus a number of neutron-absorbing control rods. The water circulates through the reactor core by natural convection. Steam, produced by the heat created by the fissioning of uranium atoms, is conducted to the 3,500 kilowatt turbo-generator, located in a nearby building.

The simplicity of construction, ease of operation, low cost, and high degree of safety suggest the possibility that this type of small power plant may be suitable for the use in remote areas or in conjuction with mining or manufacturing operations.