Not the First U.S. Aeronautical Patent 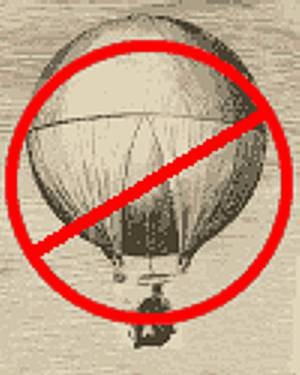 According to a summary list of patent titles published in 1812 in the book The Emporium of Arts and Sciences, by John Redman Coxe (p.392), a U.S. patent was issued to Moses McFarland on 28 October 1799 on a “Federal Balloon.” More information on the patent is impossible to obtain from the U.S. Patent Office because the original copies of patents were lost when the building in which they were stored burned to the ground in 1836. Only a few of those patents were ever restored.

Some sources, including books and web sites, state that this represents the first aeronautical patent issued in the U.S., which is probably only assumed from the patent title of “Federal Balloon.” However, this is apparently a false assumption, as can be found in correspondance in 1799, held by the Massachusetts Historical Society.

More information, kindly provided by a Reference Assistant with the Massachusetts Historical Society was received in reply to an email enquiry:

After examining the two Timothy Pickering letters referenced in the “Google Snippet” I cannot positively confirm that the “Federal Balloon” was not aeronautical, but indications would seem to lean in that direction. On 23 September 1799 Pickering writes to J. Russell:

“I wish Major McFarland has hit on a proper name for his machine; it has no relation to a 'balloon' and his motive for calling it 'federal' is rather fanciful than solid. The machine itself promotes[?] the idea of a whirligig; but if it is substantially useful in promoting health, I should, for myself, be better pleased if the Major was to call it McFarland's Exercising Machine, or by some other name that did not suggest its being a plaything or an object of idle amusement. If found greatly inspired[?], it then[?] will be permanent, and the name I have proposed would then very properly perpetuate the memory of the Inventor.”

The letter to McFarland of 5 October 1799 is largely illegible, although the gist seems to be Pickering simply suggesting a name change for the “machine”.

So, without being entirely certain one way or the other, I send along the information and you may do with it what you will. Please let me know if I can help further.

Note that these documents were written in the same year that the patent was issued, and describe it critically as having “no relation to a ‘balloon’” and that it would be better called an “Exercising Machine.” Thus, unless there is other evidence, this 1799 patent seems to have been falsely attributed as the first U.S. aeronautical patent. (The historical context is that the Montgolfier Brothers made their first hot-air balloon test in France on 5 Jun 1783.)

The fourth edition of Famous First Facts by Joseph Nathan Kane is one of the books that has referred to McFarland's patent as a “first.” Confirmation has been received by email from the publisher that the sixth edition has dropped this reference.