History of the Propeller Beanie and
The Ultimate Propeller-Head Geek 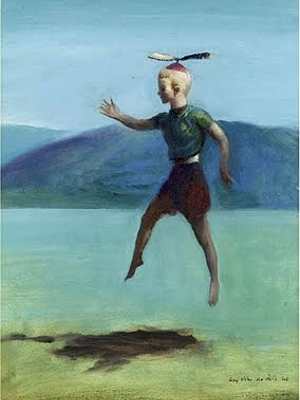 The name “propeller-head” is used nowadays for a technophile, sometimes disparagingly, for an enthusiast of technology and (according to the Mirriam-Webster Dictionary) especially of computers. In images, the modern geek may be satirized with a cap having one or two toy propellers mounted to spin horizontally above the top of the hat.

So, was this flamboyant hat originated in the flower-powered hippie era of the 1960s? Well, no - decades earlier, in fact. It is generally accepted to have been first improvised in Cadillac, Michigan, using a beanie (a visorless cap) in 1947, made by Ray Faraday Nelson. It quickly became an icon for science fiction fans to identify themselves, and a national fad.

In a published interview1, Nelson described how “In the summer of 1947, I was holding a regional science fiction convention in my front room and it culminated with myself and some Michigan fans dressing up in some improvised costumes to take joke photographs, simulating the covers of science fiction magazines. The headgear which I designed for the space hero was the first propeller beanie. It was made out of pieces of plastic, bit of coat-hanger wire, some beads, a propeller from a model airplane, and staples to hold it together.” Shortly thereafter, it was worn by George Young of Detroit at a world convention, where it was an enormous hit.

Nelson thereafter frequently drew cartoons for fanzines portraying science fiction fans wearing propeller beanies. In 1948, Artist Guy Pène du Bois (1884-1958) painted a “Boy with a propeller beanie” hovering some feet up in the air above what looks like perhaps a sandy beach.

Shortly, it was further popularized by a television program, Time For Beany (video). The show was hugely popular with children, and even adults. The title character was a propeller beanie-wearing puppet named Beany whose sock-puppet friend called Cecil the Seasick Sea Serpent was voiced and controlled by an unknown Stan Freeberg!) Starting in 1949, it ran five times a week for five years. It was hugely popular with children, and even some adults (including Albert Einstein, according to a Stan Freeberg reminiscence) (video). That idea of Bruce Sedley on KTLA in Los Angeles, California, was produced by Disney animator, Bob Clampett, who soon followed up with a syndicated, animated cartoon series of Beany and Cecil, in which Beany's propeller enabled him to fly (video).

Nelson went on to become a professional writer of novels and short stories. He made no profit from the fad of sales of beanie hats that followed from his idea. 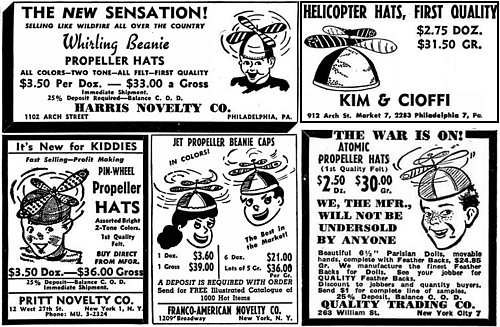 Advertisements from The Billboard issue of 5 Jun 1948. (source)

The accompanying illustrations come from The Billboard of 5 Jun 19482, showing an advertisement from one novelty merchant in Philadelphia offering Whirling Beanie Propeller Hats, the “New Sensation Selling Like Wildfire All Over the Country,” for $3.50 per dozen, and another company in the same city supplying Helicopter Hats for $2.75 per dozen. In the same issue, similar hats were also being sold from two New York companies as Jet Propeller Beanie Hats and as Pin-Wheel Propeller Hats. Another New York merchant advertised Atomic Propeller Hats, offering them for $2.50 per dozen, as a manufacturer that would “not be undersold.”

It should be further noted that this last advertisement, promoting with the headline “The War Is On,” chose to name the product “Atomic” less than three years after the nation learned of the atomic power unleashed by the bombing of Hiroshima, Japan, during World War II.)

Advertisements from The Billboard issue of 12 Jun 1948. (source)

That price war was joined the following week with two more advertisers in The Billboard3, one at $2.40 and another at $2.32 per dozen. 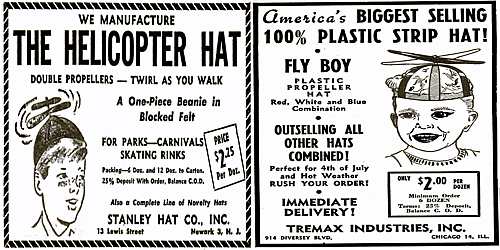 Advertisements from The Billboard issue of 19 Jun 1948. (source)

Just one more week later4, and felt beanie helicopter hats were available from Newark, N.J. for $2.25 per dozen. By then, a Chicago merchant had innovated by replacing the beanie with an open cradle of plastic strips to mount the propellers - in a red, white and blue combination “Perfect for 4th of July and Hot Weather!” And at only $2.00 per dozen, it was promised “Outselling All Other Hats Combined!”

The targets of these advertisers in The Billboard magazine included parks, skating rinks and carnival workers. No doubt with these propeller beanies given as prizes on the games, at county fairs many children were seen walking along the midway with propellers on their hats turning in the wind. 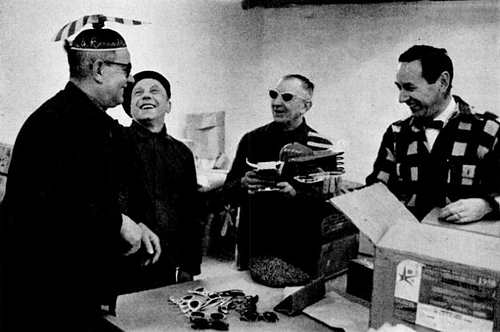 Propeller beanie drew laughs from Belgian workmen as they unpacked display shipments to show How America Lives for the U.S. exhibit at the Brussels Fair, as shown in Life magazine (31 Mar 1958). (source)

By 1958, how the propeller beanie had become established in American life was demonstrated as part of the U.S. pavillion exhibit of “How America Lives” at the Brussels Fair. A photo in Life magazine5 showed it along with other U.S. gadgets including glamor-type sunglasses, drawing laughs from the Belgian workers unpacking display shipments. The article photographer, Michel Rougier, contrasted the seriousness of the Russian pavillion showpieces which treated the event as a giant industrial show, promoting Soviet progress in education, heavy machinery, and of course their scientific advances with Sputniks. Even the Germans, defeated in World War II only in the decade before, dedicated their exhibit to “joie de vivre.” The fair's towering iconic structure was the Atomium.

The giant cereal manufacturer Kellogg's joined the fad6, offering a propeller hat as a premium kids could obtain by mailing in the requisite number of box tops. Cereal premiums were at this time long established. When Kellogg's Cornflakes had been introduced to the public early in the century, in 1906, the company began providing a book (“The Funny Jungleland Moving Pictures Book”) given to customers at stores when they purchased two packages of their product. This incentive was followed by cereal premium mail-in offers to build loyalty to the brand.

This idea for a cereal premium was reborn in more recent times as the subject of a three-week story arc in the newspaper strip cartoon, Calvin and Hobbes. Calvin, the hyperactive youngster, daily eats several bowls of his favorite cereal, Chocolate Frosted Sugar Bombs. In this story line, he diligently saved and sent in four box tops, then waited weeks for his battery-powered propellor hat to arrive, only to be disappointed that the beanie did not provide the power of flight that he had expected. That had been the reason he had wanted it. 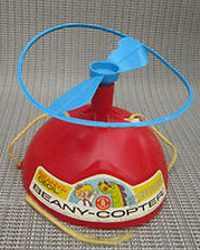 As an advertisement on the Beany and Cecil TV cartoon show (video) demonstrates, toy manufacturers were not shy about capitalizing on the fad, too. The Beany-Copter (trademarked 30 Aug 1961) hat by Mattel launched a circular, spinning, flying propeller which could be wound up and released from the top of the dome of a plastic hat by pulling on the chinstrap. A paper label on it identified it as “Official” for the Beany and Cecil cartoon characters.

The novelty of the propeller hat has been enduring. As recently as 13 Sep 2007, a trademark was issued to Schyling for the Copter Cap, which this time features a baseball style cap with a wind up circular propeller of the same principle as the earlier Mattel toy.

But the award for the Ultimate Propeller-Head Geek must surely go to a much earlier claimant. In U.S. patent No. 1,799,664 issued on 7 Apr 1931, inventor Hermann W. Williams of Boston, Massachussetts, presents his design for a “Safety Drop Device For Aviator's Use,” inspired by the seed pod wing of the maple keys seen spinning down from maple trees in fall. With concern that “The ordinary parachute of umbrella type which requires to be opened out from its collapsed or folded form for a safety descent sometimes fails to open at the critical time,” the innovation is purported to “provide a safety landing device which does not require any preliminary opening but is always operative for a gliding descent as soon at it is attached to the body of the user.

As the patent diagrams show all that needs to be said, Hermann W. Williams must surely be the Ultimate Propeller-Head. 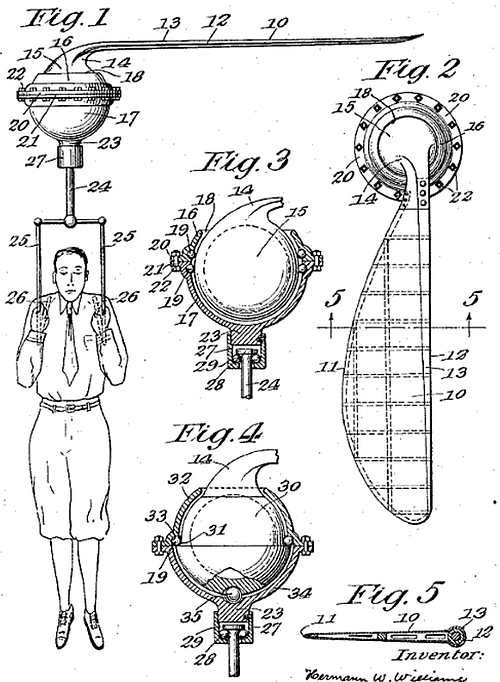