On Thursday,  28 Jan 1960, the U.S. Navy used Earth’s oldest satellite - the Moon - to bounce radio signals from Washington to Hawaii. Teletype messages were exchanged between two admirals, and a facsimile picture of an aircraft carrier was transmitted. This was the first public demonstration of the capabilities of a communications system, newly developed by the Navy. This link was a “pilot” of a moon-relay circuit.

Shortly after World War II, on 19 Jan 1946, the Army Signal Corps were able to detect a radar signal reflected off the moon’s surface. A quarter-second radar pulse was beamed at the moon from the Evans Signal Laboratories, Belmar, New Jersey. An echo was received 2.4 seconds later, proving that radio waves of this frequency could penetrate the Earth’s atmosphere.

It had been known since 1951 that a radio signal could be reflected off the moon. The Naval Research Laboratory Project Moon Bounce had proved a signal transmitted via the moon surface from one place on earth and be crudely detected at a second point. It was found that the signal received was more coherent than expected, which led to developing transmission of data with sufficient fidelity and at a rate adequate for communications purposes.

By 1960, the system had been refined, and used large parabolic antennas, each 84-ft in diameter. A radio signal left an antenna in Annapolis, Maryland, and traveled a 480,000 round trip off the moon and back to Earth in about two-and-a-half seconds to similar receiving antennas in Cheltenham, Maryland, and Wahiawa, Hawaii. 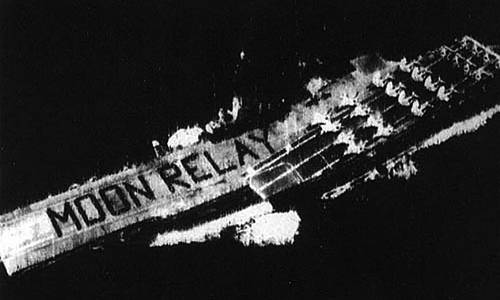 The photo in the first public trial was of the carrier U.S.S. Hancock with a group of sailors on the flight deck spelling out the words “Moon Relay.” Keyboarded via teletype machines, Admiral Arleigh A. Burke, Chief of Naval Operations, and Admiral Herbert G. Hopwood, Commander in Chief of the Pacific Fleet were able to express enthusiasm for the successful communication of their messages.

The system employed the ultra-high frequency range (UHF) at about 400 MHz, which was chosen because these waves could travel without disruption when passing through the ionosphere. Thus geomagnetic storms would not hinder this type signal, and operate without a blackout due to weather conditions. While the system was under “operational evaluation” the new system was able to communicate messages at times that solar disturbances were interfering with radio transmissions using the conventional path bouncing through the ionosphere.

An interesting advantage offered by this system was that the communication could not be jammed by an enemy. On the downside, hours available for use were limited to when the moon was at the same time visible in both Washington and Hawaii, a time window that varied from a few hours to sometimes up to 12 hours.

The age of artificial satellites began with Sputnik (launched 4 Oct 1957), which transmitted the sound of beeps back to Earth. The Americans scrambled to compete for their second place in history and launched their first successful satellite, Explorer I, on 31 Jan 1958. Thus the Moon Relay project became obsolete within a few years, when artificial satellites became routine for communications,